More Power to Middle Powers: Toward a Multipolar Re-Globalization

More Power to Middle Powers: Toward a Multipolar Re-Globalization

Globalization is generally viewed as a process led by the United States, China, the EU and other great powers. In reality though, globalization is nowadays hardly dominated by the world’s most powerful nations alone, since there has been a substantial shift in the global power constellation. The alteration could slowly but steadily tilt the balance in favor of jointly acting middle power actors. According to a forecast of the U.S. National Intelligence Council in as early as 2012,1 a group of middle power countries including Colombia, Egypt, Indonesia, Iran, South Africa, Mexico, and Turkey, together with other middle ranking countries, have been collectively projected to have a larger share of global power than currently influential states such as Japan and Russia by 2030. The U.S. National Intelligence Council’s power index is calculated by taking into account four traditional variables: GDP, population size, military spending, and technology. An updated version of the power index in the year 20172 incorporating health, education and governance in addition to the four original variables also suggests that the combined developing nations (categorized as non-OECD countries) could be set to surpass developed countries (i.e., essentially OECD members) within the next decade.

Middle powers, whether they are highly developed ones (such as Australia, Canada and Japan) or ‘rising’ (e.g., Brazil, Indonesia, and India), are seen by many as key players in managing global crises. In the context of the tensions in the South China Sea, Bruce Gilley noted that:

“Some analysts believe that the only option for the countries of the region is to align themselves with Washington or Beijing. But Indonesia’s emergence as a key actor on the South China Sea issue shows that so-called ‘middle powers’—the 10 to 20 influential states, like South Africa and Australia, that aren’t permanent members of the United Nations Security Council or global giants like Japan, India and Germany—can play an outsize role in defining that response. Through proactive and nonaligned diplomacy, middle powers may be able to influence the rise of China in ways that the United States cannot.”3

These predictions, given a decade ago, have been to some extent prophetic. As the rise of authoritarian powers, such as China, seem to be inevitable for now, it will be difficult for the big Western bloc powers to contain them on their own. In view of this global power shift, middle powers should be able to enhance their role in global governance. In order to achieve this, they must jointly strive for a multipolar, reformed globalization. A multipolar re-globalization co-influenced by middle powers could entail a reframing of globalization—that is, “to conceive of globalization now in a different way” as proposed by Benedikter and Kofler.

The present moment seems an opportunity for this kind of reframing. After the rather opaque and chaotic years of the Trump administration, the US seems in the process of reclaiming its international leadership role as the Biden administration restores multilateral diplomacy. For example, immediately after Joseph Biden’s inauguration the US has rejoined the Paris Agreement on climate change, one of the most important cooperative projects in the world that, at least in conception, treats global and middle powers as equals.4  Yet there are still few signs that the American public’s economic and social concerns about globalization that propelled Donald Trump to the presidency have significantly waned.5  There remains sufficient discomfort with negative economic consequences of globalization to elect another populist-nationalist American President. Trump’s presidency also underscored how dependent the world is on American leadership, even if it is absent. Benjamin Schreer argues that Europeans are divided over developing strategic autonomy from the US, even after Trump’s lack of commitment to NATO.6  As America was reluctant to tackle global crises during the Trump presidency, Russia militarily pursued its national interest in Syria and elsewhere. However, Dobbins et al. emphasize that Russia’s economy is stagnant. Although its military power underpins its great power status for now, “Russia is not a peer or near-peer competitor but rather a well-armed rogue state that seeks to subvert an international order it can never hope to dominate.”7  Meanwhile, the EU seems to survive one crisis to face yet another. Brexit and the bloc’s slow economic growth have (temporarily) dampened the union’s potential for achieving a more pronounced global leadership role. Both Russia and the EU appear unable to formulate an “alternative” strategic vision to lead re-globalization due to persistent internal troubles.

At first glance, China seems the only viable rival to replace America and lead the re-globalization process. During the Trump presidency Chinese officials demonstrated this intent as they championed the benefits of global market economy and even made promises of green economic growth. However, China’s global strategy remains authoritarian, anti-democratic, exploitative, and at times even deceptive. The Belt and Road Initiative (BRI) is seen by many as a debt trap mechanism set by China to gain control of strategic infrastructure and assets in developing economies.8  Will China adhere to some form of power-sharing with other actors or seek to dominate the globe? Is China going to exercise exclusive control over the South China Sea? Could China take over Taiwan by force? These questions matter since they highlight the possibility that Chinese leadership of the global order may bring more problems and less tranquility than the existing American-led status quo. Moreover, China’s excessive use of surveillance technologies to control its citizenry suggest that any China-led globalization will seek to curb political freedoms and may result in a world order where state authorities exercise excessive control over people, and an increase in forced assimilation policies such as China carries out with its Uighur population and in Tibet, which some consider “cultural genocide.” It is reported that China is already exporting its AI-powered surveillance technologies to autocracies around the world to enhance government control over citizenry.9

A multipolar re-globalization co-managed through middle power alliances thus appears ever more promising. Such multipolar order will not seek to wholly replace the existing one but to counterbalance its extremes. Middle powers can promote democracy and human rights, as traditional middle powers like Australia, Canada and Sweden are already doing.10  If rising middle powers like Brazil, South Africa, South Korea, Turkey, and some others form democratic alliances with traditional middle powers and coordinate their policies, the global spread of democracy and human rights will definitely benefit. However, some rising middle power nations are struggling with democratization and human rights at home due to populism, and that is a serious challenge for their societies in their quest for an international role. Nevertheless, compared to China’s dismal record of human rights and political participation, most middle powers’ troubles are less significant and therefore they represent a better chance for the world than the Chinese alternative.

A multipolar re-globalization co-influenced by middle powers could entail a reframing of globalization.

Middle powers are already organizing themselves into multilateral aggregations to exert more influence in global affairs.11  A major problem with some middle power alliances is that they are still dominated by great powers. Pant points out that the BRICS alliance (Brazil, Russia, India, China and South Africa), for instance, includes China and Russia as dominant actors in the group, mainly because the Chinese economy is larger than all the other BRICS economies combined.12  Also, some traditional middle powers enjoy very close economic and political ties with the US, particularly Canada and Japan. Again, this does not necessarily serve their specific middle power interests. Despite those challenges, middle powers increasingly form their own economic and political alliances as they cannot rely exclusively on great powers to meet their growing economic and political needs. MIKTA (Mexico, Indonesia, South Korea, Turkey and Australia) is one such promising collaboration by some leading middle powers to promote effective global governance.13  Another exemplary middle power cooperation is the Comprehensive and Progressive Agreement for Trans-Pacific Partnership (CPTPP), which was signed in 2018 by Australia, Brunei, Canada, Chile, Japan, Malaysia, Mexico, New Zealand, Peru, Singapore, and Vietnam in response to the US withdrawal from the Trans-Pacific Partnership. Despite the US’s absence, the CPTPP represents almost 13.5% of global GDP,14 and definitely shows that a group of middle powers, along with some smaller states, can sustain initiatives without great power involvement.

The remaining big question is whether middle powers are willing to assume a bigger role in reframing globalization in more thoroughgoing ways. Middle powers may differ in their understanding of globalization, but many are aware of economic benefits and remain determined to sustain a liberal international order. Chang Che claims that Japan has already risen to this challenge as it provided leadership for multilateralism in Asia by setting “the regional agenda on trade and digital governance, among other issues.” It is “not only a reliable partner to the United States and its allies in the Indo-Pacific but an architect of the region’s emerging liberal order.”15 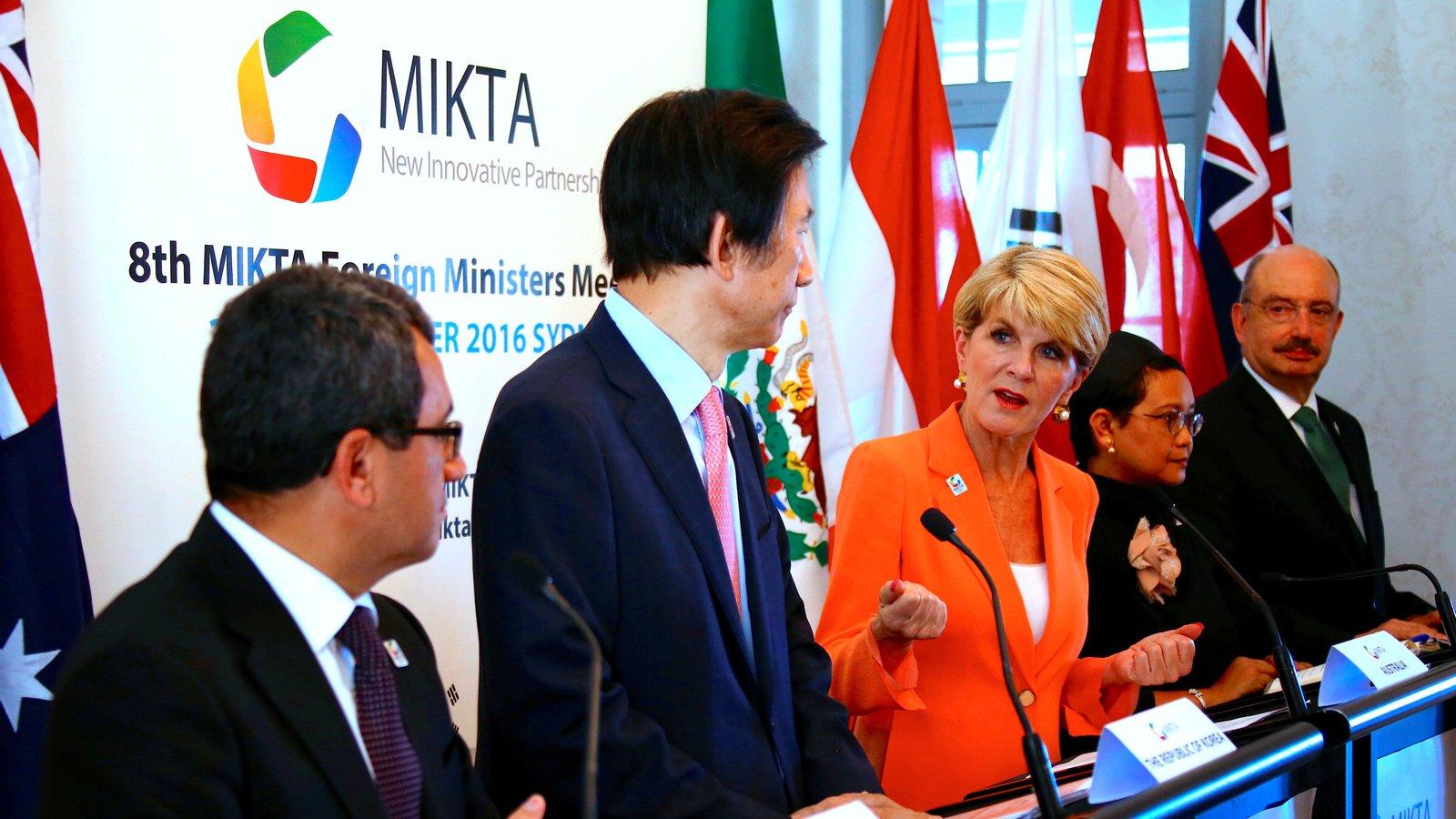 What is the longer-term perspective? The US and the EU, as main pillars of the liberal architecture of globalization, should aim to integrate middle powers more closely into existing global governance patterns. The G20 is one such example but its scope should be widened to meet the demands of a multipolar global economy rather than being largely a platform for crisis management. Also, at the political level more power should be afforded to middle powers. The UN Security Council’s membership should be expanded and the veto restricted. The future of liberal internationalism and the UN lies, in general, with more middle power involvement. According to Louise R. Andersen, middle powers are inclined towards negotiated solutions rather than the use of force as they lack capacity to dictate their will, which in turn makes them more compromising and pragmatic and hence better suited for maintaining a rules-based liberal internationalism.16

In conjunction with economic and political reforms, the cultural aspect of globalization also requires a rethink. The presently dominant form of globalization imposes the use of English language and, mostly, spreads American or Western cultural products and values. Instead, we need to find ways of protecting cultural diversity in the world. This should be achieved not through restrictions and protectionism but by the promotion of cultural cohabitation and multiculturalism. With power comes responsibility. Middle powers should have more power and responsibility. Reframing globalization by situating middle powers at the heart of global governance is both right and necessary.

2. Paradox of Progress. a publication of the U.S. National Intelligence Council (2017), available at: https://www.dni.gov/index.php/gt2040-media-and-downloads

14. “Economic Impact of Canada’s Participation in The Comprehensive and Progressive Agreement for Trans-Pacific Partnership,” Office of the Chief Economist, Global Affairs Canada (2018), February 16, available at: https://www.international.gc.ca/trade-commerce/trade-agreements-accords-commerciaux/agr-acc/cptpp-ptpgp/impact-repercussions.aspx?lang=eng