Editor’s Note: Given the rise of xenophobic nationalism and ethnic strife across the world, we, as citizens of a concerned global community, confront one urgent political task. How do we bring together individuals and groups who are suspicious of each other and that have targeted each other in pernicious ways, encourage them to speak to each other, and keep a conversation going? The one crucial precondition for dialogue is toleration of and respect for opinions and ideologies we may not agree with. When we tolerate each other we rule out violence, for violence is born out of intolerance. In this essay, Sibaji Bandhpadhyay explores the complexities of non-violence, making the case that non-violence, despite its moral certitude, is not beyond questioning and critique.
___________

Ahimsa Paramo Dharmo—‘non-violence is the highest dharma’—has emerged as an oft-repeated philosophical phrase in contemporary India. We are constantly reminded that enlightened Indians of the past swore by ahimsa or non-violence. That the ancients consistently asserted the ethical propriety of ahimsa. That ancient sages, seen as the custodians of society, condemned himsa (violence) and called upon the people to preserve harmony among different callings and thus augment Loka-samagraha, or social wealth. This popular wisdom garners its philosophical resource from the Mahabharata, the colossal work known as itihasa (‘so it happened’) in the Indian taxonomical tradition. There is hardly any dispute that the Mahabharata places a high premium on the concept of non-violence. However, recent scholarship points to a problem: that of reducing the message of the Mahabharata to the axiom Ahimsa Paramo Dharama. It is possible to suggest that a closer reading may illustrate the epic’s more complicated engagement with the subject of violence and non-violence.

Interestingly, when Alf Hiltebeitel in his 2001 book Rethinking the Mahabharata prepared a tally sheet for the phrase ‘Paramo dharmo’ he found that out of the 54 times that it occurs in the classical text, it is conjoined with the word ahimsa only four times. Hiltebeitel’s chart draws our attention to another concept that is emphasized in the Mahabharata, that of anrsamsya or ‘non-cruelty’. Moreover, Hiltebeitel shows us that anrsamsya paramo dharma or ‘non-cruelty is the supreme dharma’ features a total of eight times in the text. But in most writings on the Mahabharata, anrsamsya is treated as synonymous with ahimsa. It has not been seen as an independent philosophical concept in its own right. It is time that we treat it as a philosophical concept that is separate from ahimsa, for by doing so we may actually discover new meanings of non-violence.

In the Mahabharata, the concept of anrsamsya is presented most succinctly in the story of a meat seller, Dharmavyadha—a conscientious sudra (the lowest of the four social castes in India). It is in the long lecture that the Dharmavyadha of Mithila delivers to the haughty Brahmin Aranyakaparvan that we discover the limits of ahimsa. We have to, he suggested, think of non-violence in the context of violent societies in which we live. The Dharmavyadha’s life is as contradictory as most lives are. His livelihood is dependent killing the birds in the air and beasts of the field, and subsequently selling their flesh in the open market. These are acts that involve the direct use of violence. And yet, the Dharmvyadha seeks to lead a moral life which receives its ethical sustenance from non-violence. How is this possible? When we unravel the story we find that Dharamvyadha pursues his family trade by selling the meat of hogs and buffaloes, but he does not kill the animals himself. He sells the meat of animals killed by others. He lays out chopped up flesh in the marketplace for the gratification of the culinary appetites of his customer. At the same time he practices strict vegetarianism and believes in the theory of karma phala—that life is shaped by the outcomes of one’s own actions. But he also believes that it is destiny that calls people to their respective vocations. He readily admits that his profession is heinous, but excuses himself on the ground that he is a mere ‘passive instrument’. He appreciates the lowliness of his rough trade, but it gladdens him to think that he supplies meat to the gods in duly conducted sacrificial rituals. 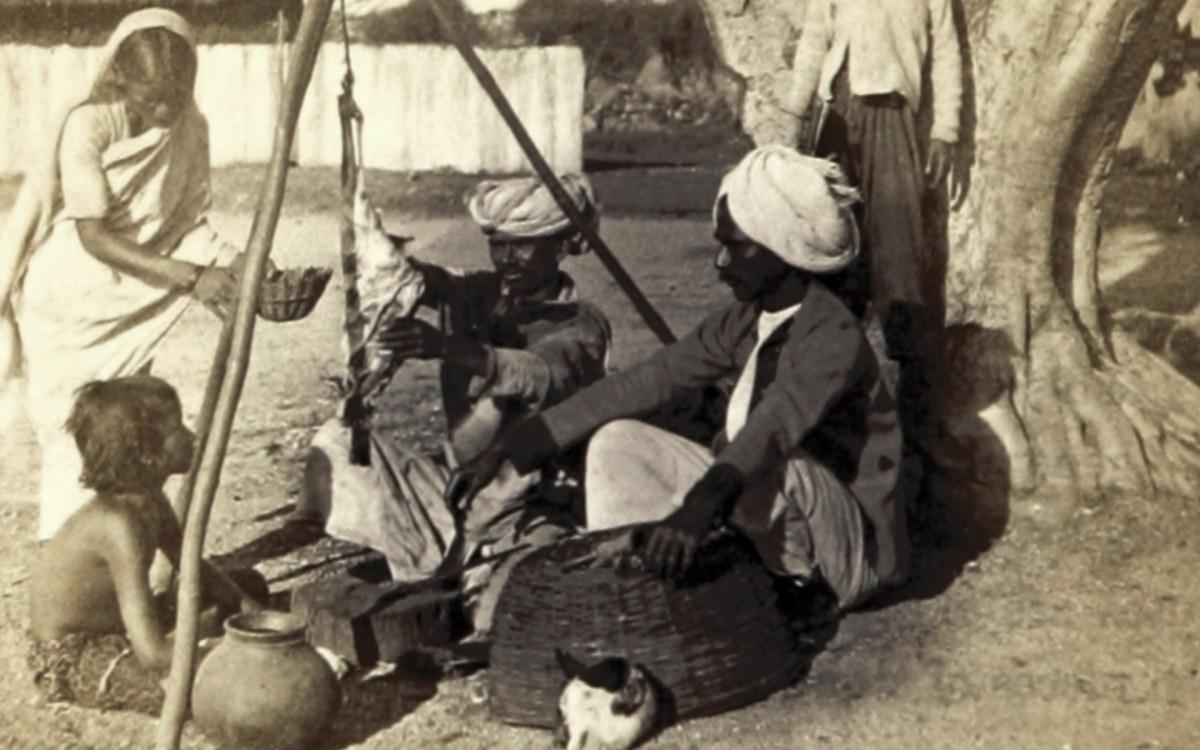 In making these fine distinctions that highlight the moral desirability of ahimsa on the one hand, but its unattainability while conducting one’s daily life on the other, the Dhramvyadha introduces the notion of ānŗśamsya, or non-cruelty. Schematically put, the Dharmavyadha argues the following:

Dharmavyadha understands the ‘state of violence’ to be an irremediable, unavoidable factor of the ‘human condition’. Therefore in his system of ethics, ahimsa obtains the precarious status of an unrealizable ideal. No matter how morally judicious a subject may be in conducting his daily life, the goal of ahimsa can only be approached by moving along an asymptomatic curve that converges only at infinity. This axiomatic proposition, which he claims is part and parcel of an authentic Brahminical philosophy, leads inexorably to the framing of what, for the sake of convenience, may be called a ‘principle of proxy’.

It is time that we treat [anrsamsya] as a philosophical concept that is separate from ahimsa, for by doing so we may actually discover new meanings of non-violence.

In the Brāhmanic universe of the Dharmavyadha, the notion of ānŗśamsya functions as a stand-in for ahimsaā. It maintains a critical distance from both the components of the himsā-ahimsā or ‘violence-non-violence’ binary without dissolving either of the two. It opens up a discursive space within which excessive violence is condemned and unqualified non-violence considered unviable. Placed as a golden mean between two extremes, ānŗśamsya gestures towards the apparently contradictory precept of ‘violence without violation’. In short, given the fact that every being on earth is obliged to abide in violent but objective conditions, the only way we can differentiate ourselves from other living things, and assert our species being, is to treat ānŗśamsya as the closest possible approximation of ahimsā.

Arguably, the concept of anrsamsya formed a compromise formula, devised to diffuse the longstanding discord between orthodox Brahmins and the non-conformist sramans, mainly Buddhists and Jains. The major ideological clash that took place in the Gangetic plains about two and a half thousand years ago was between the votaries of animal sacrifice and those who were disenchanted by the magical powers of such sacrifice. Most of the sramans (Buddhists and Jains) denounced the senselessness involved in killing innocent animals for gratification or appeasement of gods. The dissenting sramans fleshed out the idea of ahimsa as a protest against this outrage.

The concept of anrsamsya resolved the dispute between two warring factions. The concept focuses on personal attitudes rather than particular instances of violence or non-violence. Established to countermand the Śŗāmaņic over-valorization of ahimsā, ānŗśamsya speaks of an ‘affective state’. It encourages the cultivation of a sense of detachment, particularly in regard to the consequences of actions. 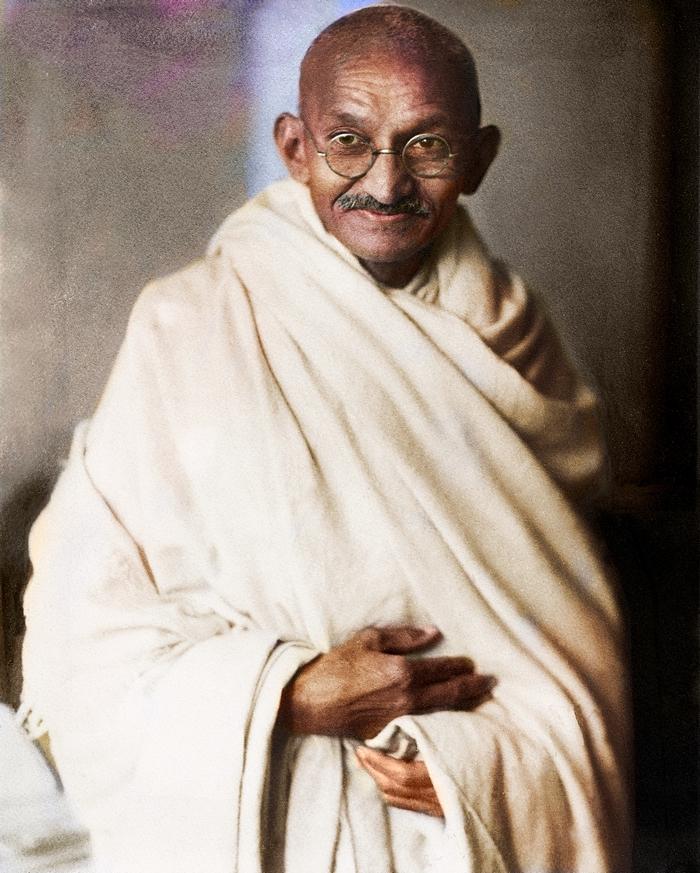 Gandhi argued for a similar sense of detachment when he invoked ahimsa as the philosophical mainstay of his politics in early 20th century India. For him non-violence was non-negotiable. Gandhi argued that ‘non-violence is the law of our species as violence is the law of the brute.’ Paying rich tributes both to Mahavira, the founder of Jainism and Siddhartha Gautama, the founder of Buddhism, Gandhi suggested that they were two of the staunchest supporters of ahimsa; soldiers in the cause of non-violence. But Gandhi also conjoins the concept of non-violence with the concept of aparigrahah, or to be free from longing for possessions. The term itself has a checkered history. Aparigrahah generally implies ‘non-possession’. It appears in the ancient, most probably pre-Buddhist text, Jābāla Upanişad.  It is one of the ‘Five Great Vows’ enjoined by Jainism. It recurs only once in Chapter Six, verse ten in the Bhagavadgītā.

For Gandhi, aparigrahah is closer to a sense of detachment than an act of renunciation. Jainism subscribes to the latter interpretation of the concept. Gandhi differed. He wrote in his Autobiography thus, “I understood the Gita teaching of (aparigrahah or) non-possession to mean that those who desired salvation should act like a trustee who, though having control over great possessions, regards not an iota of them as his own.” Note the crucial difference. While according to the Jain tenet aparigrahaħ signifies renunciation of all material possessions in the exact sense of the term, Gandhi derived from the Gītā’s aparigrahaħ the profile of a ‘subject’ who does not give up his private property for good, but who detaches himself from a sense of possession and ownership. The concept is a proxy to that of non-violence, refocusing ethical consciousness toward practically attainable forms of interaction with fellow humans and the world we inhabit together.

Alf Hiltebeitel, Rethinking the Mahabharata: A Reader's Guide to the Education of the Dharma King. University of Chicago Press, 2001.

Mohandas Gandhi, An Autobiography: The Story of My Experiments with Truth. Part 4, Chapter 5, 'Result of Introspection.' Available at:
http://www.columbia.edu/itc/mealac/pritchett/00litlinks/gandhi/part4/405...