After Trump: US Nuclear Strategy and North Korea

Missiles on display during a military parade in Pyongyang, January 2021. (Source: Korea News Service via AP)

After Trump: US Nuclear Strategy and North Korea

"I learn a science from the soul's aggressions...."
Saint-John Perse

After Donald Trump, US nuclear strategy calls for a thorough revaluation and refinement. Nowhere is this obligation more plainly urgent than in regard to North Korea. Unlike Iran,1 another evident sore spot of Trump-hastened strategic debility, the unpredictable regime in Pyongyang is already nuclear. Moreover, while Trump was celebrating his purportedly close relationship with Kim Jong Un ("We fell in love," reassured the former American president), the North Korean leader was rapidly modernizing his nuclear arsenals.

In early January 2021, describing the United States as "our biggest enemy," Kim Jong Un called more openly for advanced nuclear weapons and infrastructures. He then summarized his country's strategic posture concisely: "Our foreign political activities should be focused and redirected on subduing the United States, our biggest enemy.... No matter who is in power in the US, the true nature of the US and its fundamental policies towards North Korea never change."

What next? It is now high time to inquire as follows: What tangible nuclear threats will face US President Joe Biden from North Korea? And, how should the United States respond?

These proposed questions are many-sided and complex. Pertinent threats are both direct and indirect.2  During the doctrinally-deficient Trump presidency, all corresponding and derivative risks were allowed to expand without effective controls. At this critical point, these risks have become grave, mutually-reinforcing, and potentially existential.

Any now eleventh-hour elevation of US strategic thought would need to be based on greater presidential appreciation of relevant complexities, both political and military. These complexities include multiple "synergies" that were wittingly and irresponsibly overlooked by Donald Trump.3  Though the disgraced former president asserted that he had "miraculously" solved the North Korea nuclear problem in just one afternoon by "falling in love" with Kim Jung Un (and, reciprocally, Kim with him), this hard-to-imagine attachment was never more than intentional self-parody.4  In all synergistic intersections,5 the "whole" of any particular outcome must be greater than the sum of its "parts."

Good strategy is intellectual. The ancient Greeks regarded war and war-planning as a daunting challenge of "mind over mind." It was already understood that the primary and preeminent battlefield would have to be carefully conceptualized before the onset of any actual troop movements or engagements.

A comprehensive theory is indispensable. Always, the world, like the myriad human bodies who comprise it, must be recognized as system. Among the most serious specific implications of this apt metaphor is the following: Any more-or-less major conventional conflict in northeast Asia could substantially heighten the prospect of destabilizing international conflicts elsewhere. This is the case whether the consequences should occur immediately, or in increments. At some point, moreover, these prospects could include a regional nuclear war.

Who are the experts in such mind-centered matters? Should we once again turn ritualistically to "the generals"? How much applicable military experience could American generals have managed to garner on the novel subject of a nuclear war? And how much might the new president and his senior commanders—however well-intentioned and "objective"—see only what they want to see?

Under Joseph Biden, who now offers a compromised nation some genuine hope, the United States will need a refined strategic posture, one that can capably account for both the rationality and intentionality of enemy decision-makers in Pyongyang.6  Moreover, going forward, capable strategic analysts guiding the new American president should enhance relevant nuclear investigations by carefully identifying basic distinctions between (a) intentional or deliberate nuclear war and (b) unintentional or inadvertent nuclear war. The derivative risks resulting from these different types of possible nuclear conflict are apt to vary considerably. Those American planners who remain too completely focused upon only a deliberate nuclear war scenario could too-casually underestimate a far more serious nuclear threat to the United States. More precisely, it could mean an increasingly credible threat of unintentional or inadvertent nuclear war. And a further conceptual distinction must be inserted into any US analytic scenario "mix," the subtle but still important difference between an inadvertent nuclear war and an accidental nuclear war.7

America's new president, unlike his unreasoning predecessor,8 ought to be sufficiently well-grounded in science and logic. Though rarely acknowledged, however, no truly scientific or reliable probability estimations can be undertaken regarding unprecedented or sui generis situations. More specifically, in science and mathematics, meaningful probability judgments must always be based upon a carefully calculated frequency of relevant past events. 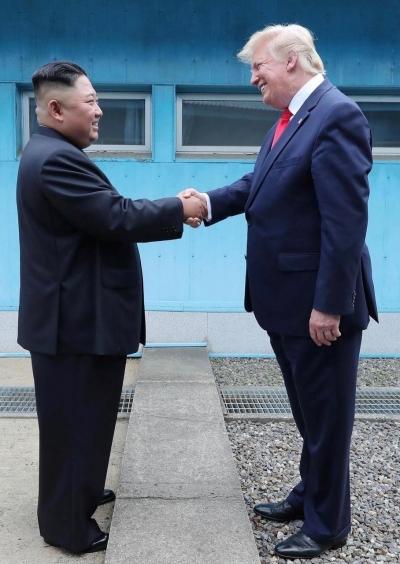 What matters most, going forward, will be a capacity to wage bewilderingly complex struggles of "mind over mind," not just ad hoc or satisfyingly visceral contests of "mind over matter." In time, such critical strategy lessons could apply usefully beyond the specific North Korean nuclear issue. Again, the world is always a system; what happens at one place may impact variously assorted other places and corresponding outcomes.

President Trump, we may recall, once said of Kim Jong Un, "He also has a button, but my button is bigger than his button." In fact, of course, Kim's "smaller button" is still fully capable of spawning unimaginable and insufferable levels of destruction. In nuclear world politics, traditional distinctions between "powerful" and "weak" are often simplistic.

The Case for Global "Oneness"

In the final analysis, the key task for President Joe Biden will be to focus greater attention upon the interrelatedness or "oneness" of world politics. Just as each individual human being, the microcosm, is comprised of interlocking biological systems, world politics, the macrocosm, is made up of variously constituent national and sub-national social systems. In both examples, microcosm and macrocosm, survival will require more reliable and generalized patterns of cooperation between systems. Donald Trump's refractory "America First" was not a step in the right direction.

Whether we like it or not, a nuclear North Korea is a fait accompli.

"Just wars," wrote Hugo Grotius, the acknowledged founder of modern international law, "arise from our love of the innocent."11  Now, however, it is plain that a nuclear war could never really be "just," and that certain earlier legal distinctions (e.g., just war vs. unjust war) must be continuously conformed to the ever-changing technologies of military destruction. To successfully prevent a nuclear war in Asia or anywhere else, it will always be necessary to resist mightily any national strategic reversions toward earlier Trump-era misconceptions.

The Case for Overturning the False Communion of World Politics

From its Westphalian beginnings in 1648,12 the state of nations has offered humankind only perpetual dread and false communion. Inevitably, as an ethos based upon fear, its cumulative effects must take into account a very deep desolation of the human spirit. To somehow repair this intolerable situation, states will finally need to learn to care for themselves and all others at the same time.

It's a tall order. Could it ever work? Can world leaders like the new American president seriously grasp this elusive calculus of human potentiality, reaffirming the sovereignty of Reason over the deception of Violence? Can any of these traditionally adversarial states ever really be expected to tear down the intimidating walls of belligerent nationalism, and replace them with more permeable membranes of a spirited and universally gainful cooperation?

Most plausibly, of course, the answer is "no." Yet, we exist on the horns of an existential dilemma. Accordingly, warns the poet Saint-John Perse, "We must learn a science from the soul's aggression." There is no other way.

3. Pertinent synergies could clarify or elucidate the world political system's current state of hyper-disorder (a view that would reflect what the physicists prefer to call "entropic" conditions), and could be conceptually dependent upon each national decision-maker's subjective metaphysics of time. For an early article by this author dealing with interesting linkages between such a subjective chronology and national decision-making (linkages that could shed additional light on still-growing risks of a US-North Korea nuclear war), see: Louis René Beres, "Time, Consciousness and Decision-Making in Theories of International Relations," The Journal of Value Inquiry, Vol. VIII, No.3., Fall 1974, pp. 175-186.

4. Here we may recall the apt words of "beat poet" Lawrence Ferlinghetti back in 1958 (A Coney Island of the Mind): "In a surrealist year some cool clown pressed an inedible mushroom button, and an inaudible Sunday bomb fell down, catching the president at his prayers on the 19th green."

6. To begin, the American president should approach the still-growing North Korean nuclear threat from a disciplined and conceptual perspective. This means, among other things, factoring into any coherent US nuclear threat assessment (a) the expected rationality or irrationality of all principal decision-makers in Pyongyang; and (b) the foreseeable intentional or unintentional intra-crisis behaviors of these adversarial decision-makers.

7. For further elaboration on these issues see Beres, “The Limits of Long-Distance Romance: Risks of Catastrophic War with North Korea.” global-e, 13:6, February 5, 2020

8. During his dissembling presidency, too little attention had been directed toward Donald J. Trump's open loathing of science and intellect, and to his evident unwillingness to read. Ironically, the Founding Fathers of the United States were intellectuals. As explained by distinguished American historian Richard Hofstadter: “The Founding Fathers were sages, scientists, men of broad cultivation, many of them apt in classical learning, who used their wide reading in history, politics and law to solve the exigent problems of their time.” See Hofstadter’s Anti-Intellectualism in American Life (New York: Alfred A. Knopf, 1964), p. 145.

9. To look behind the news, beyond the specific adversarial issues of US-North Korea nuclear relations, we might well consider the wise and overarching insight of 20th century German philosopher Karl Jaspers: "The enemy is the unphilosophical spirit which knows nothing and wants to know nothing of truth." It was this spirit, quintessentially, that from the start overwhelmed and misdirected former US President Donald J. Trump.

10. Regarding the specific effects of US nuclear strategy on security matters in the Middle East, by this author, see:  https://besacenter.org/wp-content/uploads/2019/07/162-MONOGRAPH-Beres-Israeli-Nuclear-Deterrence-CORRECTED-NEW.pdf

12. Reference here is to the Treaty of Westphalia (1648) and the codified beginnings of the balance-of-power or state system.