Coronavirus and the Populist Other: May Intellectuals Cast the First Stone?

Coronavirus and the Populist Other: May Intellectuals Cast the First Stone?

In 2020, everyone’s life changed almost overnight as governments strongly recommended or ordered the suspension of fundamental rights, such as the freedom to move, to assemble, and for very many, to work, in an effort to counter the coronavirus. The suspension of these freedoms, coupled with the lack of universal social insurance for everyone—for example, via universal coverage of bare minimums of income and of healthcare—exposed the fragmented social fabric that populism thrives upon and exploits to its advantage.

The socio-economic impact of the pandemic unsurprisingly follows intersectional lines: preliminary research shows that the worst socio-economic impact affect women and minorities, many of whom have also disproportionally served as ‘essential’ workers in their own homes or on the frontline of the crisis. The pandemic offers a sobering global picture, exposing those who pay their dues and those who don’t, those who are rewarded and those who aren’t—regardless of their merit, talent, and contribution at every level of society.

Some populists have begun acting like self-proclaimed experts themselves. Donald Trump promoted the anti-malarial drug hydroxychloroquine despite warnings from public health officials. Jair Bolsonaro copied Trump’s public promotional script, but more gravely, he forcefully demanded the health ministry to recommend guidelines to administer the drug to coronavirus patients. Responding to concerns about the rising tide of misinformation, Facebook and Twitterremoved several posts from populist leaders, including Bolsonaro’s video describing the drug as an effective cure—clearly alarming us all that our democracy, rule of law, justice, and health are in the hands of social media corporations and several clowns making a mockery of human life and dignity.

Bufacchi’s optimism that “no-one will resent” foreign nurses, doctors, and cleaning staff who work heroically on the front lines of the pandemic has been undermined by recent developments in Sweden. With popular support the government opted for ‘mild’ recommendations instead of an outright lockdown, thus not interfering with basic freedoms. However, the ‘Swedish model’ resulted in enormous life losses compared to its neighboring countries Finland, Norway, and Denmark. When faced with admitting the model's failure, expert explanations parroted the political parties by alluding to the indisputably evergreen populist mantra: it’s the immigrants’ fault. Some argued that asylum seekers and refugees on the staff of elderly care facilities allegedly did not comply with coronavirus guidelines, which ‘they’ may not have understood. I concur with Gina Gustavsson that the Sweden’s debate is sliding down a risky nationalist slippery slope.

Nevertheless, these red lines were systematically crossed before the coronavirus. In combining two efficient types of political rhetoric, ‘othering’ and ‘blame-shifting’ in reference to an easy scapegoat, the Swedish case stands out as an archetype not for its uniqueness in handling the crisis, but for its confirmation of the populist ideological status quo and its efficient grip on societies.

Yet the COVID-19 crisis has also brought an opportunity: it exposes not only the social structure that keeps populism strong, but also the process of othering that is as present within critical progressive circles as it is in conservative political discourse. The disproportionally affected ‘other’ during the crisis now became strongly visible.

Americans have been able to put food on their tables because many so-called ‘essential workers’ have been working as undocumented migrants, who are systematically left at the margins of the social contract. This indicates that migrants’ dignity, wellbeing, and even lives are considered more or less expendable by the larger public. This hypothesis is reinforced in the European context by governmental decrees, which, during global international travel restrictions, nevertheless demanded that underpaid Eastern European migrants be flown on private jets to do farming work in richer countries such as in Germany and the UK. Indeed, migrant workers have been requested to come to the UK under the leadership of Boris Johnson, who campaigned for Brexit on the promise of controlling national borders and blocking the influx of migrants, especially those from Eastern Europe. 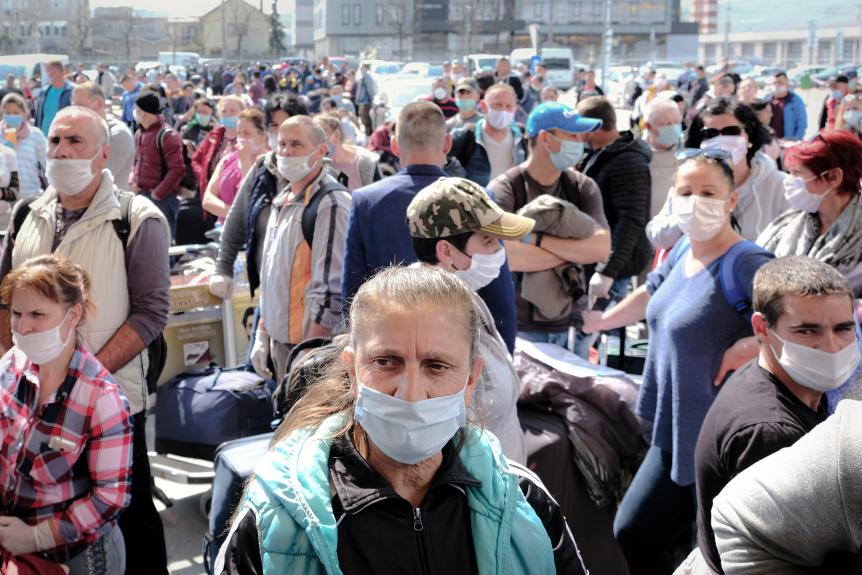 Progressive critics point to the inconsistency between the enormous importance of these migrants’ work, serving other countries at the risk of their lives, and their underprivileged status. But ‘the other’ is not always the migrant from afar, who has for so long been scapegoated and dehumanized in public discourse. The ‘other’ is also present in our homes. Preliminary findings show that the heaviest socio-economic impact of the pandemic runs along intersectional lines across the society as whole. For example, many female scholars have been overburdened by labor in the household and at work, a worrying trend that undermines women’s career advancement. ‘Othering’ is present in today’s universities, advancing those at the top of the hierarchy—disproportionally white males—while pushing women towards the losing end of the social contract. Female scholarly publications have plummeted during the health crisis,1 while those of males have increased by up to 50 percent. But even worse off are those with a diverse background of racial, ethnic, and sexual orientation.

Referencing Virginia Wolf, Agostina Allori suggests that “A woman must have money and a room of her own if she is to write.”2  Instead, the pandemic has found women with no room of their own. Additionally, she points to statistics compiled by the European Institute for Gender Equality which show (unsurprisingly in my view) that even before the COVID-19 outbreak, “79 % of women cook and do housework daily compared to only 34 % of men” and “women in the EU spent 13 hours more than men every week on unpaid care and housework. Now with the closure of schools and workplaces, and older relatives possibly getting sick, their unpaid workload is likely to further increase.”

[T]he 'other’ is not always the migrant from afar, who has for so long been scapegoated and dehumanized in public discourse. The ‘other’ is also present in our homes.

Unlike populists who use megaphones for othering, in academia the practice is carried out silently, “politically correctly,” and by many who often describe themselves as progressives who engage in scholarly debates about justice and morality—a position from which they mount critiques of populism. They have two things in common. First, they do not refrain from criticizing Donald Trump and Viktor Orban for their repugnant othering and blame-shifting. Second, they tend not to see any inconsistency between their declared progressiveness and their actual behavior, which results systematically in othering, marginalizing, and excluding those constructed as others within their own private and professional circles.

If we are to imagine the decline of populism, the pandemic offers an almost perfect egalitarian biological metric of contagion: everyone, with no exception, is vulnerable to contracting the virus regardless of race, ethnicity, sex, religion, gender, nationality, and profession. Although the elderly and the ill will have less chance to survive than the young and healthy, the virus follows an ideal liberal democratic principle of distribution. But socially, just as many populists see an opportunity to advance their interests in the coronavirus crisis, progressives countering populism could make the ethically opposite and indeed salutary move, by declining the opportunity given with the pandemic—i.e., to move ahead of their counterparts, the “other” in their very offices and homes—and thereby break the pattern of parasitically leeching off of the back of divisive populist politics.

For decades, the populist politics of unreason and division cultivated fear and prejudice against 'the other', emotions which, in turn, have squeezed out the last breath of solidarity necessary for a prosperous democracy and a just form of civic life. People have become desensitized to political vulgarity.

Our institutions aren’t simply morally bankrupt, as leaders spread fake news, lies and “bullshit,” they are economically and politically corrupt. According to Oxfam, the world's richest 1% get 82% of the wealth, many of whom are becoming much richer during the pandemic. This drastic inequality kills far more than the coronavirus, at home and abroad. Economic elites support populism as the easiest political card to play, so long as unscrupulous populists take turns in doing their dirty work. Their efficient rhetoric of deft blame-shifting tells the continually impoverished, indebted, and precarious teachers, students, and fruit pickers that there aren’t sufficient resources for their salaries, their pensions, or their healthcare. Rights are expensive: who would ever disagree? The other, the migrant, and the foreigner are to be blamed for our troubles, while the rich only becomes richer.

Populism’s byproducts of divisiveness, fear, and inequality are part of the vicious circle that must be broken if today’s populists are to fall and not simply be replaced by others. Solidarity and unity must begin somewhere, which is why progressives should be the first to rid themselves of their own ‘other’. Yet, the very divisive plague that feeds populism runs as deep as the privacy of our homes. Male intellectuals, in most respects part of the supposedly progressive circle, are advancing their research and careers ahead of their female counterparts. The latter are held back not by a lack of talent, but rather by their very marginalization from the social contract. This othering of women isn’t the result of grand populist rhetoric—to a large extent, it is generated by the very forces who criticize populism.

Georgiana Turculet is a Visiting Faculty and Researcher at Central European University and a Research Affiliate at the European Institute for Development Studies.