Yemen is one of the most vulnerable MENA countries due to poverty and conflict.

Across the globe, the COVID-19 pandemic has revealed institutional fragilities as well as the societal fault lines of class, wealth, race/ethnicity, gender, and national origin. The Middle East/North region (MENA) has socio-demographic and institutional features—with variations across countries or clusters of countries—that make it an instructive site for the study of the pandemic and its economic, social, and political effects. Here I focus on the effects on diverse categories of women, along with the critical role of women health workers.

Over the decades, MENA governments have vastly improved healthcare systems and health outcomes, as measured by number of hospital beds and healthcare workers, infant and child mortality rates, maternal mortality, and life expectancy.1  However, the “authoritarian bargain” that provided free healthcare and education, an array of subsidies, and guaranteed employment to graduates, began to fray in the 1990s and by the new century generated numerous protests. The first wave erupted in the 2011 Arab Spring uprisings and a second wave in early 2019, with citizens in Algeria, Iran, Iraq, Lebanon, Morocco, and Tunisia protesting poor public services, high unemployment, and incompetent or corrupt governance. The oil-rich Gulf sheikhdoms are in a different category, albeit one that includes very high military expenditures and huge populations of migrant workers without labor rights.

Because of a relatively late demographic transition, MENA has large populations of young people and smaller populations of the elderly. Unlike other regions, female labor force participation (FLFP) is low, and employed women are not concentrated in retail and hotel sectors; educated women do, however, have a large presence in health and education. Youth unemployment rates are very high, and those of young women can be 30-35 percent. Populations can include numerous refugees (notably Syrians in Lebanon, Jordan, Turkey). Even before the pandemic, most countries besides the Gulf sheikhdoms were suffering economically and accumulating external debt. Oil prices have declined since 2014, creating hardship for the larger oil-exporting countries but also for oil-importing ones. Conflicts (Libya, Syria, Yemen, Israel/Palestine) and harsh sanctions (Iran, now also Syria) are unfortunate realities.

In March 2020, MENA countries instituted lock-down orders, and some have done better than others. The country least prepared to tackle the pandemic was the poorest one, Yemen, but the Arab countries with the largest numbers of cases and deaths as of July 22 were Saudi Arabia, Iraq, and Egypt.2  Iran and Turkey also were badly hit, ranking 11 and 15 among countries affected worldwide, as of July 23.3

Gender Relations, Women, and the Pandemic

The effects of COVID-19 on women have been discussed in terms of job losses, intensified care responsibilities, susceptibility to the virus due to concentration in certain occupations, and the potential for domestic violence. In short:

-Women comprise most health and social care workers and are on the front lines of the fight against COVID-19.
-Mass school closures affect women because they bear much of the responsibility for childcare and in many countries, elder care.
-Shelter-in-place requirements and dense households increase the likelihood of domestic violence.

Female nurses, midwives, and support staff dominate the healthcare and social services fields in many MENA countries (the Gulf states rely largely on migrant labor for such services), which increases women’s risk of infection. In Iran, many health workers lost their lives. Some 80% of Lebanon’s Order of Nurses is female, tackling not only a public health crisis but also a severe economic crisis.4  Despite women’s small share of the paid labor force, a UN regional policy brief estimated that out of some 1.7 million jobs that would be lost in the Arab region due to COVID-19, fully 700,000 would be women’s jobs.5  In some cases women with small children left their jobs because childcare centers closed or nannies returned home.6  As female migrant workers were furloughed or dismissed, their families and communities back home were adversely affected as well.7

Intimate partner violence/domestic violence (IPV/DV) has increased in many parts of the world, including MENA countries; families locked down in small spaces or suffering loss of jobs or access to basic needs experience stress and frustration, increasing the likelihood of domestic violence—at a time when women’s access to shelters or anti-DV services is reduced. The situation is exacerbated in refugee camps or in conflict zones and humanitarian settings, as in Libya, Syria, Yemen, the West Bank, and Gaza.

Tunisian feminist leaders have expressed the concern that IPV/DV may be increasing. According to the Minister of Women, Children and the Elderly, DV had increased five-fold between March and mid-April, despite the fact that the ministry had created a toll-free number operated by 11 pro-bono psychologists to help victims. The Association Tunisienne des Femmes Démocrates has long sponsored hotlines and shelters but its president, Yosra Frawes, fears that women’s access to them would be limited during the pandemic.8  Other reports showed increases of DV in Palestine, Israel, and Morocco in May 2020.9  In one expression of solidarity, Jewish and Arab women stood side by side, wearing masks and demanding that the Israeli government enact emergency measures to help women at risk, remove them from their homes, and place them in shelters for battered wives.10

Women Doctors on the Frontlines

Despite overall low FLFP, MENA women’s presence across the professions has risen steadily since the 1990s, in education, social services, pharmacology, and law, and enrollment in the STEM disciplines is high. In Tunisia, feminization of the health sector began in the early 2000s, in part because many Tunisia’s doctors and health workers had departed to Europe or the Gulf sheikhdoms, but also because of rising university enrollments of young women in medicine, nursing, and medical research. According to a study by the Tunisian women’s policy agency CREDIF, women in 2015 comprised 42% of medical personnel.11  Today, Tunisian women are found among professors of medicine, heads of hospital departments, and directors of research. They played a critical role during the pandemic, despite personal and financial sacrifices. For example, the Tunisian authorities “took huge steps to confront the pandemic,” but sociologist Lilia Labidi adds that this included the government decision to deduct one day’s pay from the salaries of workers in the public and private sectors to help pay for containment efforts through the purchase of tests, masks, and PPE. 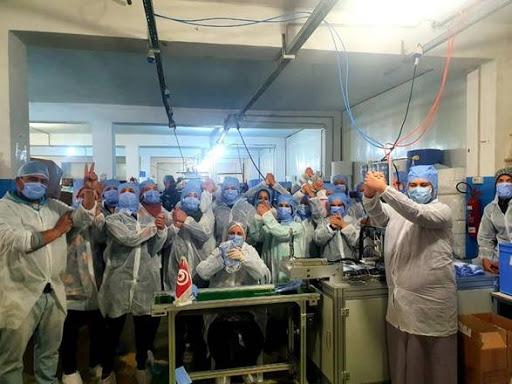 Tunisian citizens in principle have access to public healthcare, but such access is uneven, and specialized care is concentrated in more prosperous coastal regions. There is a greater density of specialized doctors in Greater Tunis and the Center East (roughly 4.4 per 10,000 inhabitants), although general practitioners seem most evenly distributed across the country’s various regions, with highest concentration in the northwest and the southwest.12  Tunisia’s women health workers became even more visible to the wider public, media, and government after the outbreak of the pandemic. “In homage to the care-givers who are at the front lines of the fight against the coronavirus, in March 2020, Marouane El Abassi, head of the Tunisian Central Bank, presented a new 10-dinar banknote featuring the portrait of Tawhida Ben Cheikh—the first Tunisian woman doctor.”13  It is worth noting that Tunisia’s healthcare system and the investments in women medical workers has paid off: as of 13 June 2020, according to the UN ESCWA pandemic tracker, Tunisia had had 1,093 cases, 995 recoveries, and 49 deaths.  A month later, the figures were roughly the same.

It is difficult to predict how MENA countries will adjust policies and institutions to better prepare themselves for any future pandemics, or the extent to which women’s roles in healthcare, education, and the care economy will be rewarded. I offer several suggestions. Nation-wide networks of affordable and quality pre-school and childcare facilities would create more employment opportunities for women, free other women for jobs elsewhere, and provide small children with safe and healthy environments. Internet penetration is high in most countries, and digital work could expand women-owned businesses or home-based occupations. Training more women for jobs in public health to target neglected rural areas, schools, and workplaces should become a priority. Finally, family care workers—predominantly women—deserve either a basic income or a guaranteed pension.14  For now, the triple crises of conflict, economic crisis, and COVID-19 make these proposals appear unrealistic, but countries should consider them if they are to recover, grow, and prosper. Debt relief or cancellation, and the lifting of sanctions, certainly would help.

1. Infectious diseases have been successfully tackled (other than in war-torn Yemen) but many countries have seen a rise in non-communicable diseases, such as cancer, diabetes, and cardiovascular diseases.

6. The lack of quality and affordable childcare is a factor in the low levels of female employment, especially among working-class and low-income women.

7. Migrants in the Arab States remitted over $124 billion in 2017, with the United Arab Emirates and Saudi Arabia ranking second and third globally after the U.S. in migrant remittances: http://www.al-monitor.com/pulse/originals/2020/06/kuwait-expats-coronavirus-foreign-workers-sabah-emittances.html#ixzz6OWqi7jwp

Valentine M. Moghadam is Professor of Sociology and International Affairs at Northeastern University.