This article focuses on the shrinkage of the democratic and civil society space in the Philippines. Specifically, it provides an analysis of the national security situation as shaped by the long-standing counterinsurgency strategy in the country, and the resulting patterns of human rights violations, intimidation, persecution of, or violence against civil society actors. Due to space limitations, it addresses only three key features of this development: (1) the role of counterinsurgency strategy, and, in particular, of its post-9/11 “whole-of-nation” approach; (2) revisions in security legislation and introduction of new counterterrorism measures; and (3) the certification and licensing of non-profit organizations.1

Decades of counterinsurgency strategies in the Philippines have failed to end 50 years of communist insurgency. Instead, since 2002 and under the framework of the post-9/11 global campaign against transnational terrorism, the Philippine military has been targeting civil society actors, activists, and grassroots organizers suspected as the civilian support base or ‘front organizations’ of the Communist Party of the Philippines (CPP) and its armed group, the New People’s Army (NPA). In the last two decades, human rights organizations have documented thousands of cases of extrajudicial executions, including state-sanctioned and death squad-style killings of activists, forced disappearances, illegal detention, gender-based violence, and torture.2  Amnesty International asserts that these human rights violations are happening within the context of a continuing counterinsurgency campaign.3  The government also files trumped up charges against activists for alleged “terrorist activities.”4  Michelle Bachelet, United Nations High Commissioner for Human Rights, posits that the state practice of “red-tagging” or labelling individuals or civil society groups as communists or terrorists often leads to extrajudicial killings and poses a dangerous threat to civil society and freedom of expression.5

While counterinsurgency strategies between 2002 and 2020 have changed operation plans under each president—Gloria Macapagal-Arroyo’s Bantay Laya (Freedom Watch), Noynoy Aquino III’s Bayanihan (Shoulder-to-Shoulder), and Duterte’s Kapayapaan (Peace) and Kapanatagan (Tranquility)—these strategies have common features. Counterinsurgency plans adopt a “holistic,” “whole-of-nation,” or “people-centered” approach of mobilizing the entire government bureaucracy to transform provinces influenced by the communist insurgency as “peaceful and ready for further development.”6  These plans also are designed as an ‘end-game strategy’ that will definitively eradicate the insurgency. However, because guerilla-style insurgencies are difficult to defeat and require systemic changes, the government and its military have been intentionally targeting activists and civil society groups, labeling activists as communists and terrorists, and making no distinction between armed combatants and civilians.

A key feature of the Duterte’s administration’s “whole-of-nation” approach has been the plan to revise the Human Security Act of 2007 and replace it with the Anti-Terrorism Act of 2020 (ATA). From a human rights perspective, the HSA already contained several problematic provisions and had been repeatedly used by the government to “hail rights defenders to court and subject them to judicial harassment.”7  Its successor, ATA, was approved by both the Senate and the House of Representatives and eventually signed into law by Duterte on July 3, 2020.8

The ATA of 2020 marks a significant deterioration from the already troubling HSA of 2007. Among its problematic features:
·      The period of detention without judicial warrant has been extended from 3 to 14 days. This period may, under certain circumstances, “be extended to a maximum period of ten (10) calendar days,”9 for a total of 24 days.
·      It removes the HSA’s provision for legal damages for unproven charges,10 which was designed to act as check on warrantless arrests and detentions, with the damages to be paid by the entity/unit responsible for the filing of the faulty charges.
·      It expands membership on the Anti-Terrorism Council (ATC) and provides sweeping new powers. Among the key functions of the Council is to “require other government agencies… and non-government organizations, private entities and individuals to render assistance to the ATC in the performance of its mandate.”11  This provision can have a chilling effect on the activities of NGOs and other civil society actors, since their advocacy campaigns can be subsumed under the exigency of assisting the ATC in implementing its own agenda.

These concerns have been amplified following the adoption of related policies and measures. The recently approved National Action Plan on Preventing and Countering Violent Extremism (NAP P/CVE)12 reinforces some of the most troubling features of the “whole-of-nation” approach. Two key features of NAP P/CVE are highlighted here.

First, it criticizes the “inadequate capability of teachers, guidance counselors, school administrators and parents to identify early signs of radicalization among children and students”13 and proposes the development of “Early Warning and Early Response (EWER) tools and strategies.”14

The second draws attention to the “exposure of individuals to the violent extremist community through digital media platforms”15 and calls for the establishment of “a mechanism/early-warning system that will ensure coordination of initiatives of government agencies and CSOs on flagging VE-related content.”16

the government and its military have been intentionally targeting activists and civil society groups, labeling activists as communists and terrorists, and making no distinction between armed combatants and civilians.

In both cases, the emphasis on EWER is instructive. It is consistent with an increasing focus on prevention, as opposed to suppression and punishment, and it enables the enlisting of civil society organizations in supporting officially determined and sanctioned measures of social control.

Certification and Licensing of Non-Profit Organizations

Section 1 of Executive Order 70 states that “the Government shall prioritize and harmonize the delivery of basic services and social development packages in conflict-affected areas and vulnerable communities.” In doing so, it seeks to reinforce and institutionalize the “whole-of-nation” approach by replacing the ad hoc relationships that had previously formed between the military and the local governments with a formalized system that effectively integrates the AFP and other national security agencies with the delivery of basic social services.17  The ultimate goal of this policy, according to the AFP, is to ensure the involvement of NGOs and civil society organizations in the “anti-communist” national security agenda.18  In practice, however, given that seemingly all critics of Duterte’s administration are labeled as communists, the actual result of this policy is the use of the “whole-of-nation” approach to stifle all dissent. 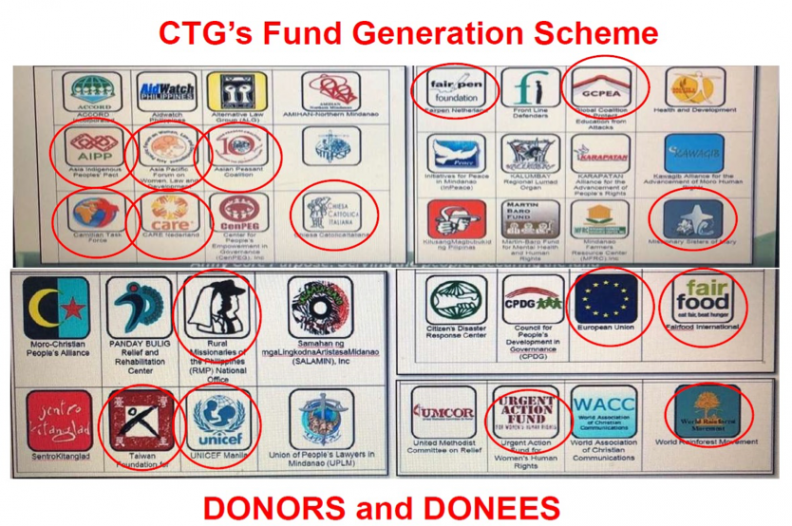 Figure 1: Slide from a presentation on the “whole-of-nation” approach given by the AFP’s Deputy Chief of Staff for Civil Military Operations at the 2019 Milipol Asia-Pacific Conference, showing alleged financial ties between international organizations and “communist terrorist groups” (CTGs).19

The primary method by which this is achieved is through abuse of registration and anti-money laundering regulations by the Department of Social Welfare and Development (DSWD), the Securities and Exchange Commission (SEC), and the Anti-Money Laundering Council (AMLC). DSWD Memorandum Circular 17 requires all non-state social welfare and development agencies (SWDAs) to submit detailed information on their operations to the government and to undergo certification and licensing before they are allowed to operate.20  It furthermore creates so-called Area-Based Standards Networks that effectively place  private organizations under the leadership of the DSWD and local officials,21 giving DSWD the right to carry out spot checks on the functioning of any SWDA (Section XI.1) and protecting DSWD personnel from all administrative, civil, or criminal liability (Section XII).

Executive Order 68, signed by President Duterte in November 2018, laid out a new anti-money laundering and counter-terrorist financing (AML/CTF) strategy for the Philippines. As a result, a new set of guidelines was published by the AMLC in 2018,22 which requires it to investigate (Section 1.9.1), to freeze (Section 1.10.2) , and to institute civil forfeiture procedures (Section 1.11) against “properties or funds that are in any way related to terrorism or [terrorist financing].” These regulations were extended by the SEC to Non-Profit Organizations (NPOs),23 which are required to file detailed disclosures about their membership, as well as the sources of their funds and their intended usage. In addition, the SEC has the power to levy fines or revoke a NPO’s registration outright (Sections 12.2, 12.3).

These regulations have come under severe criticism by opposition lawmakers and human rights groups concerned about their possible chilling effect on civil society organizations,24 due to the SEC’s essentially unlimited discretion in determining what constitutes criteria for blacklisting, and its unlimited power to compel disclosure of information from NGOs without a court order.25  Even the government’s own risk assessments of the NPO sector published in October 2018 noted that only 27 of the 101,843 registered NPOs had ever been implicated in terrorism financing.26

While the country’s actual lack of effectiveness at combatting money laundering and terrorist financing nearly landed it on the FATF blacklist in 2012 and is currently putting it at risk of ending up on the grey list,27 the government seems more preoccupied with putting administrative pressure on human rights NGOs28 (including internationally prominent NGOs such as Oxfam29) and critical media organizations.30

The closure of civic space in the Philippines is the result of a series of developments that have unfolded in a national security environment defined by the “whole-of-nation” approach to existing and emerging ‘challenges’ and ‘threats.’ This approach, characterized by the growing interplay between military responses, law enforcement measures, and people-centered initiatives, has sought to enlist public and private sector entities in the Duterte Administration's overarching quest for the maintenance of social order. This quest has led to the systematic targeting and persecution of civil society actors, and to the escalating erosion of fundamental human rights norms and standards.

1. This article is based and builds upon a report prepared by the Center for International Human Rights (CIHR), John Jay College of Criminal Justice-CUNY. The CIHR report, entitled The Closing of Civic Space in the Philippines, was drafted in response to a call by the Office of the UN High Commissioner for Human Rights (OHCHR) for an objective assessment of the situation of human rights in the Philippines, as mandated under resolution 41/2 adopted by the Human Rights Council on 11 July 2019. The CIHR report was submitted to OHCHR in January 2020. The OHCHR Report was recently released; see Michele Bachelet, Report of the United Nations High Commissioner for Human Rights on the situation of human rights in the Philippines, A/HRC/44/22, 4 June 2020.

5. Michelle Bachelet, Report of the United Nations High Commissioner for Human Rights on the situation of human rights in the Philippines, A/HRC/44/22, 4 June 2020.

7. For more on this, see Joint Submission of Tanggol Bayi (Defend Women)-Philippines and Karapatan Alliance Philippines for the Preparation by the Human Rights Committee of the List of Issues to be Considered During the Examination of the Fifth Periodic Report of the Philippines, January 2020.

10. The provision in question stipulated that any person accused of terrorism shall, upon acquittal, “be entitled to the payment of damages in the amount of five hundred thousand pesos…for every day that he or she has been detained…without a warrant. Official Gazette, Republic Act No. 9372. Human Security Act of 2007, Sec. 50; https://www.officialgazette.gov.ph/2007/03/06/republic-act-no-9372/

12. National Security Council, The National Action Plan on Preventing and Countering Violent Extremism (NAP P/CVE) (no date; on file with the authors). The Plan was adopted in the summer of 2019.

21. Department of Social Welfare and Development, “Guidelines in the Organization, Mobilization and Strengthening of Area-Based Standards Network (ABSNET). Memorandum Circular No.04 s.2018”, February 27, 2018.

25. Charissa Luci-Atienza, “Makabayan Bloc moves to scrutinize SEC memorandum on NPOs/NGOs”, January 17, 2019. FATF-mandated evaluations of the Philippines’ AML/CTF regime have noted that the decision to impose “requirements across all registered NPOs, rather than targeting NPOs vulnerable to TF abuse […] may discourage or disrupt legitimate NPO activities,” while the repetition of regulations across different agencies might be “burdensome.”The Financial Action Task Force on Money Laundering is the primary international standard-setting body in the AML/CTF field. See: Asia/Pacific Group on Money Laundering (APG), “Anti-money laundering and counter-terrorist financing measures – Philippines. Third Round Mutual Evaluation Report.” October 2019, §310.

26. Anti-Money Laundering Council, “Report on the Risk Assessment of the NPO Sector”, October 2018.

Reimagining human rights and the power of LGBT+ mobilization in Latin America: Part 1