Stare Kiejkuty military base in Poland, a 'black site' of the secret US rendition program in the post-9/11 years.

The concept of humane treatment is fundamental in international law. Indicative of its normative weight is the fact that there is probably no other issue area witnessing a greater convergence between International Human Rights Law (IHRL) and International Humanitarian Law (IHL). While these bodies of law have distinct instruments and trajectories, they share a fundamental commitment to a core of non-derogable requirements about the way in which persons subjected to the authority and control of state and (increasingly) of non-state entities should be treated.1

Yet, this fundamental commitment is being increasingly challenged as a result of certain post-9/11 developments. To be sure, the pre-9/11 period faced its own set of challenges emanating from normative ambiguities (distinction between torture and inhuman/degrading treatment) and state practice (widespread and continuing use of inhumane methods of control and punishment). However, it can be argued that the post-9/11 era is characterized by a noticeable shift whose main features include: (1) a focus on the distinction between humane and inhumane treatment, as opposed to the distinction between different forms of inhumane treatment;2 and (2) the explicit acknowledgment of certain inhumane practices as necessary tools in the global ‘war on terror’, in sharp contrast to the period preceding the 9/11 attacks in which authorities would refuse to openly admit to their use.3

In this essay, I seek to problematize the boundaries between humane and inhumane treatment within a broader context of critically assessing the evolving discourse on ill-treatment through the lens of hegemonic international law (HIL). The main argument here is that the resurgence of HIL on the global stage has sought to legitimize forms of inhumane treatment in the context of the prevailing war on terror narrative that have eroded the relevant human rights/humanitarian norms and reconfigured the boundaries of the corresponding protective space.

Normative Constraints: From Rationalization to Denial

A generic commitment to humane treatment marks many fundamental provisions of IHRL and IHL instruments. Concerning IHRL, the fundamental principle of human dignity, referenced in the Universal Declaration of Human Rights (UDHR), the foundational document of the modern era of rights, including article 3 (“right to life, liberty and security of person”), and article 5 (“no one shall be subjected to torture or to cruel, inhuman or degrading treatment or punishment”) clearly proscribe all forms of inhumane conduct. Similar language can be found in the International Covenant on Civil and Political Rights (ICCPR) and in major regional instruments, like the European Convention for the Protection of Human Rights and Fundamental Freedoms and the American Convention on Human Rights. Although some of these provisions are phrased in very general terms and do not provide definitions of key concepts,  the evolving jurisprudence of their monitoring organs4 has offered guidance on what types of conduct may fall within a specific category of inhumane treatment.5

Concerning IHL, inhumane treatment is precluded in all armed conflict situations due to the fundamental principle of humanity in conjunction with the principles of necessity and proportionality. Moreover, common article 3 to the 1949 Geneva Conventions expressly prohibits “violence to life and person” and "outrages upon personal dignity.”6  Similar references can be found in other articles of the 1949 Geneva Conventions, as well as of the 1977 Additional Protocols. The ICRC study on Customary International Humanitarian Law has identified the humane treatment of civilians and persons hors de combat as a norm of customary international law applicable in all conflict situations.7  In the accompanying commentary, the requirement of humane treatment is characterized as an ‘overarching concept’ to whose meaning the detailed rules of IHRL and IHL give expression.8 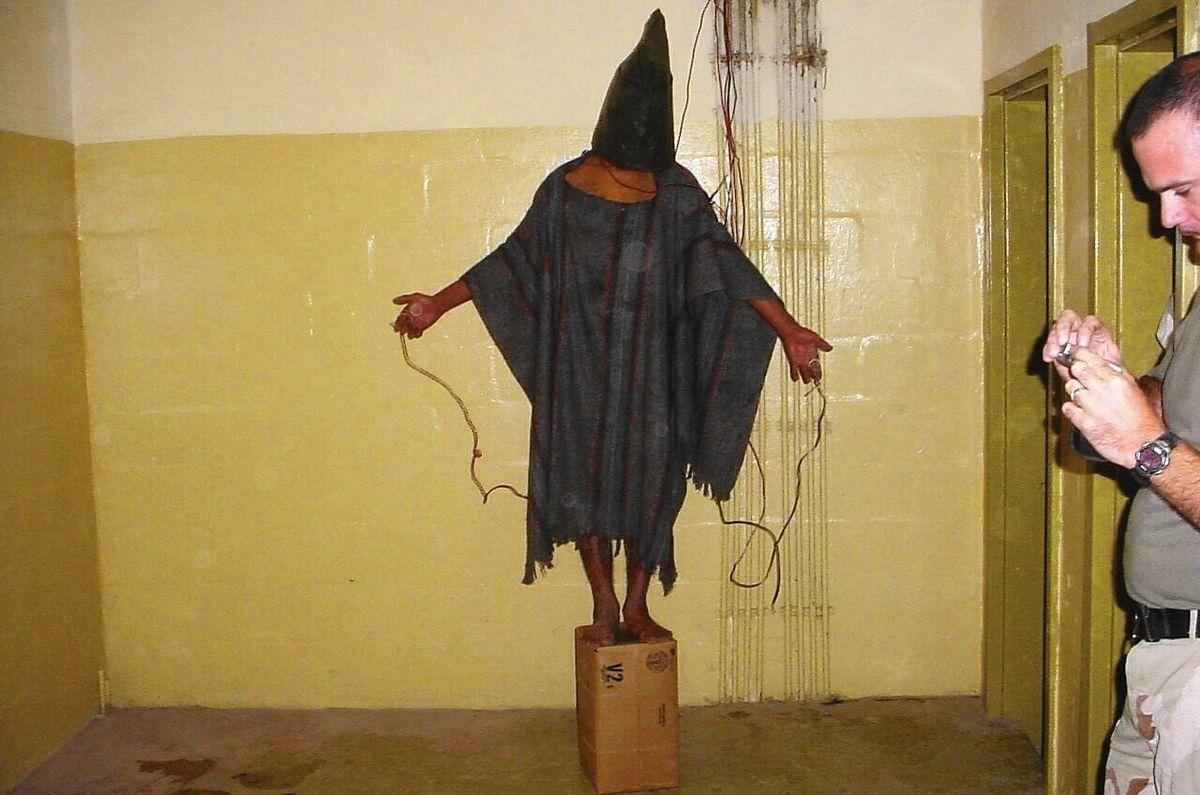 This brief foray into some fundamental instruments and corresponding rules indicates that, although the actual meaning of the term is not spelled out, it demarcates a fundamental baseline of conduct which has progressively acquired a “I know it when I see it”9 quality about it. This status, as indicated earlier, should not be equated with compliance, but with claims of deniability on the part of the perpetrators when confronted with evidence of non-compliance. This was manifested in the standard menu of responses routinely offered by state authorities when faced with allegations of ill-treatment. These usually took one of two forms: outright denial of the allegations; and attribution of the proscribed conduct to ‘rogue elements’ acting without any official authorization.10  The prospects for plausible deniability were reinforced by ‘stealth’ techniques of ill-treatment that lend credence to the outright denial option. Indeed, the switch from scarring to stealth techniques11 constituted an implicit admission of the moral opprobrium attached to ill-treatment and the perpetrator’s desire to avoid detection.

What should not be lost in this context are the conceptual contours of permissible discourse and argumentation about ill-treatment, at least as conducted in international fora by official representatives and non-governmental actors. One of the main achievements of the process unleashed by Amnesty International’s global campaign against torture12—a key contributing factor to the adoption of the Declaration against Torture (1975)13 and subsequently the Convention against Torture14—was that it gradually shifted the discourse from rationalizations of ill-treatment to its denial. It is worth remembering that less than two decades before Amnesty International launched its anti-torture campaign, French authorities, widely regarded as representatives of Enlightenment values, sought to rationalize the use of torture during the Algerian War of Independence.15

...the switch from scarring to stealth techniques constituted an implicit admission of the moral opprobrium attached to ill-treatment and the perpetrator’s desire to avoid detection.

With the growing acceptance of the prohibition of all forms of ill-treatment, such rationalizations may not have disappeared,16 but became increasingly untenable. The terrorist label turned out to be the last refuge for die-hard apologists, since it offered a target that ostensibly refused to adhere to evolving normative constraints, thus enabling the continuing relevance of and appeal to reciprocity-oriented arguments.

The attacks of 9/11 constituted a turning point for the discourse on inhumane treatment. While prior to 9/11, having reached a certain degree of consensus on impermissible conduct irrespective of its specific designation,17 the emphasis was on the distinct features of different forms of inhumane treatment, the post-9/11 era blurred the boundary between permissible and impermissible conduct. This was made possible by a series of converging developments that privileged the maintenance of security and, in the process, created a perfect storm for the protection of persons.

The basic parameters of this shift were shaped by four elements: the terrain, the identity of the perpetrator, the identity of the target, and the response rendered possible by the hegemonic use of the collective processes of international law. The terrain was ‘national security’ an issue area in which the state is the primary actor that can and does shape the debate on appropriate responses. If norm entrepreneurship in the areas of human rights, social justice, and environmental protection is often initiated by non-state actors, national security is the terrain of state norm entrepreneurship par excellence. The perpetrator was a transnational terrorist group which did not adhere to any existing normative/conventional constraints. The target was the world’s most powerful state—politically, economically and militarily—with an unprecedented opportunity to ‘seize the unipolar moment.’18  Concerning international law, the hegemon (US) chose the path of maximum flexibility and least resistance. In by-passing the cumbersome route of treaty-making and, instead, ‘legislating’ via United Nations Security Council (UNSC) Resolution 1373, the parameters were set for what was to follow: a la carte treatment of fundamental norms and treaty provisions; language that would permit the maximum interpretive flexibility in a milieu unconstrained by spatial and temporal limitations; and ongoing commitments embedded in a web of informal arrangements grounded in necessity and self-defense arguments that were endorsed by shifting ‘coalitions of the willing.’ This ‘perfect storm’ slowly but steadily shifted the protection discourse in a direction that bore an eerie resemblance to the pre-Convention Against Torture era of rationalizations of forms of ill-treatment.

To be sure, resistance against this turn has been registered on many fronts, but few would question the proposition that a certain degree of norm backsliding has occurred. How extensive though is this backsliding? It would be tragic if the world has to face another 9/11 type of crisis to find the answer.

2. Throughout this note, I use the term inhumane treatment as an umbrella concept to cover all forms of ill-treatment (torture, inhuman, or degrading) so as to distinguish it from inhuman treatment which is provided for in international instruments as a distinct from torture form of ill-treatment.

3. It is important to stress in this context that when the prohibition of torture is routinely cited by scholars as a peremptory norm of international law, this does not mean that torture is not practiced. What it means is that those authorities engaging in it would not openly admit to doing so, since its practice carries a moral and legal stigma-it is widely considered a form of inappropriate conduct.

6. In the Military and Paramilitary Activities in and against Nicaragua case, the International Court of Justice (ICJ) noted that the fundamental rules contained in common article 3 are “rules which, in the Court’s opinion, reflect what the Court in 1949 called ‘elementary considerations of humanity.’”

10. Old habits die hard. This line of defense was employed in the post 9/11 period by then Secretary of Defense Donald Rumsfeld, who blamed the abuses in Abu Ghraib to a few “rotten apples” and not to official US policy on ‘enhanced interrogation techniques’ despite overwhelming evidence to the contrary. See, for example, Scott Horton, A Nuremberg Lesson. Torture scandal began far above 'rotten apples.' Los Angeles Times, January 20, 2005.

13. Declaration on the Protection of All Persons from Being Subjected to Torture and Other Cruel, Inhuman or Degrading Treatment or Punishment. It was adopted by UN General Assembly Resolution 3452 (1975).

14.  Convention against Torture and Other Cruel, Inhuman or Degrading Treatment or Punishment. It was adopted in 1984 and entered into force in 1987.

15. General Jacques Massu, who led the French forces in the Battle of Algiers, wrote that the use of torture “was never institutionalized or codified,” a claim that was challenged by his deputy, General Paul Aussaresses. In his book, Massu also claimed that the French military proved to be “choir boys” compared to the use of torture by the fellaghas: “the extreme savagery of the latter…led us, to be sure to a certain ferocity. We remained well within the boundaries of the Leviticus Law of ‘an eye for an eye, a tooth for a tooth;” (author’s translation) La Vraie Bataille d’Alger (Paris, Plon, 1972), pp.167-168.

16.  Israel is a case in which forms of ill-treatment received formal sanctioning. The Landau Commission Report endorsed the legalization of methods already used by the Israeli security services to combat terrorism. See also Malcolm D. Evans and Rod Morgan, Preventing Torture: a study of the European Convention for the Prevention of Torture and Inhuman Degrading Treatment or Punishment. Oxford University Press, 1999, pp. 41-51.

17. As I indicated earlier, I do not mean to idealize the pre-9/11 era. However, there is little doubt that during the 25-year (or so) period preceding the 9/11 attacks, rationalizations of all forms of ill-treatment became increasingly untenable, though by no means did they disappear.

18. In fact, some analysts have argued that the 9/11 attacks provided the US with the opportunity to exhibit hegemonic conduct commensurate with its status in ways that it had failed to do during the previous decade.

George Andreopoulos is Professor of Political Science at the City University of New York (CUNY).