Throttling the Global Pandemic: A Trifecta of Science, Politics, and Profit

Throttling the Global Pandemic: A Trifecta of Science, Politics, and Profit

In November 2020, drug makers announced an apparent breakthrough in discovering a vaccine highly effective in preventing COVID-19 in trial participants.1  Rival firms are not far behind the frontrunners in their efforts to thwart the global coronavirus pandemic. But hold on. The tough questions about equitable distribution have yet to be resolved. The root problem runs deep. In the face of warnings about the risk of a pandemic, the powerholders’ lack of foresight is egregious.

A workable strategy for mitigating the pandemic requires anticipating the political and economic problems that stymie relief. Nonetheless, this issue is typically seen, above all, as a biomedical challenge, a matter of producing a successful vaccine. It should instead be understood more broadly as a trifecta of science, politics, and profit.

This perspective reflects my experience aboard a flight from Entebbe, Uganda, a hotspot for the HIV/AIDS pandemic. Seated next to me was the head of the Infectious Diseases Institute at Mulago, Uganda’s foremost national hospital, renowned for its specialization in tropical medicine. Asked about prospects for stopping the pandemic, the doctor—who like me had been living and working in Kampala for years—replied, “The interesting research is being done in your field, the social sciences, not mine. We are trying to understand why people do what they do.”

He had in mind granular findings of medical geographers and cultural anthropologists. They show that the HIV/AIDS infection rate soared along trading routes established by the slave trade and subsequently frequented by truck drivers who provide a robust market for sex workers. The incidence varies markedly among monogamous and polygamous societies, those that practice circumcision and others that do not, religious communities and ethnicities, as well as by income and educational levels. Social research also delved deeply into other political and economic structures that help explain the varied incidence of this disease. One factor is that millions of people—not only in Uganda—distrust public authorities and suspect that expert advice is tainted by self-interested politicians and dubious evidence.

To be sure, reining in the worldwide coronavirus calamity requires coming to grips with human behavior, not least as it is wrapped up with money and power. The hospitalization of a COVID-positive US president, a science-denier bent on beating competitor nations in a race to bring a vaccine to market, laid bare this challenge.

The 2020 pandemic recession is rooted in market failure and malgovernance. As early as 2011, the World Health Organization warned about the need to prepare for coming pandemics and their potentially huge toll.2  In 2015 and 2016, Bill Gates, a business magnate, software entrepreneur, and philanthropist, similarly told policymakers, including incoming President Trump, to prepare to respond to an infectious-disease pandemic.3  Yet they did not heed this advice. For their part, giant drug companies proceeded to invest substantially in products that turn a quick profit rather than on long-term R&D.

The Bill and Melinda Gates Foundation, a $50 billion operation, is winning plaudits for its vision and willingness to plow money into the race to deliver a coronavaccine to a multitude. This private philanthropy substitutes for or, some might say, complements governmental efforts to safeguard public health. But make no mistake about the forces behind the Gates’s move. The foundation does not act solely out of altruism. Less a one-dimensional case of charitable giving, the resources granted emanate from both genuine concern for disease victims and strategic acumen at accumulating capital.

Philanthropic capitalism is a remarkably expansive global process.4  It encompasses profit making by a funder that receives huge earnings from its investments, guided by wealth managers, pricey accountants, and consultants whom small enterprises can ill afford. So, too, it is subject to a low spend rate, required by US federal authorities, and benefits from its status as a tax-exempt nonprofit organization.

The South Centre, an international organization based in Geneva, reported that five transnational corporations account for around 80 percent of global vaccine sales.5  In the chase for an effective vaccine and antiviral therapies, owners of stocks in big pharma stand to gain handsomely from exclusive licensing, monopoly pricing, taxpayer-financed emergency subsidies, and guaranteed purchase contracts. In the United States, the terms of vaccine contracts with the federal government have not been disclosed. Despite calls for transparency and accountability, the records have yet to be released. It is unknown whether political connections, cronyism, and price gouging are in play. There’s no reliable evidence about the kinds of deals that affluent countries and giant pharmaceuticals have cut.

...reining in the worldwide coronavirus calamity requires coming to grips with human behavior, not least as it is wrapped up with money and power.

To cope, the three “As”— availability, access, and affordability—should be scrutinized, publicly debated, and decided upon in a democratic manner. With large drug companies competing against one another, the contestants keep critical information on scientific breakthroughs under wraps. Wary of stealth and emulation, the data are treated as protected intellectual property. These are the rules of the corporate, state-sanctioned game.

Left to taken-for-granted modi operandi, the three “As” are treated as business as usual. But these issues must be scrupulously vetted. Each one turns on the hard questions of who is empowered to decide on them and who authorizes the de facto decision makers.

1. Availability: When Jonas Salk introduced the polio vaccine, he was asked who owned the patent. Dr. Salk responded: “The people, I would say. There is no patent. You might as well ask, could you patent the sun?”6  This was before the adoption of rules for ownership of intellectual property rights under the World Trade Organization (WTO) and its antecedent agreements.

2. Access: Who will be at the front of the line to receive the vaccine? If the pharmaceutical company that first produces the vaccine has its headquarters in, say, the United States, Germany, the United Kingdom, China, or India (the world’s largest producer of vaccines), that country’s citizens are gaining initial access. But inasmuch as the pathogen is raging in other locales, how long will it take to build the manufacturing capability to produce a supply of the drug for those locales? Equity issues also present themselves within nations and communities. US authorities give priority to health care workers and other vulnerable groups, such as the elderly and people with pre-existing health conditions. Members of those groups are fortunate, but should they be entitled to protection when others such as members of minority communities disproportionately harmed by the contagion are not so privileged?

3. Affordability: Big pharma will weigh heavily in determining the cost of a vaccine. The poor in affluent countries and the masses in impoverished countries will be least able to garner timely, affordable access. It’s likely that uneven distribution of the drug within and among countries will deepen global divides. Not surprisingly, the representatives of marginalized communities have not been invited to the high table where crucial decisions about the three “As” are hammered out.

Fortunately, there is a way out of these conundrums. It should be based on understanding the rub between a planetary health crisis and vaccine nationalism. Infectious diseases don’t respect territorial borders. A global pandemic necessitates a global response. By themselves, fragmented national and subnational policies are inadequate. The remedy for a deadly disease that transgresses borders entails two-track collaboration: multilateralism impelled by civil society organizations.7

The goal must be to summon the political will to achieve global coordination. The drivers would come from above and below: elected policymakers pressured by social movements that spur collective action. The former need to support India and South Africa’s call at the WTO for waivers on the protection of certain intellectual property rights during the COVID-19 pandemic. In parallel, civil society must build public trust and strive for shared ends. Social justice activists could provide the impetus and their messaging needs to be clear: Galvanizing narratives about equitable distribution of the vaccine have the potential to generate widespread support. 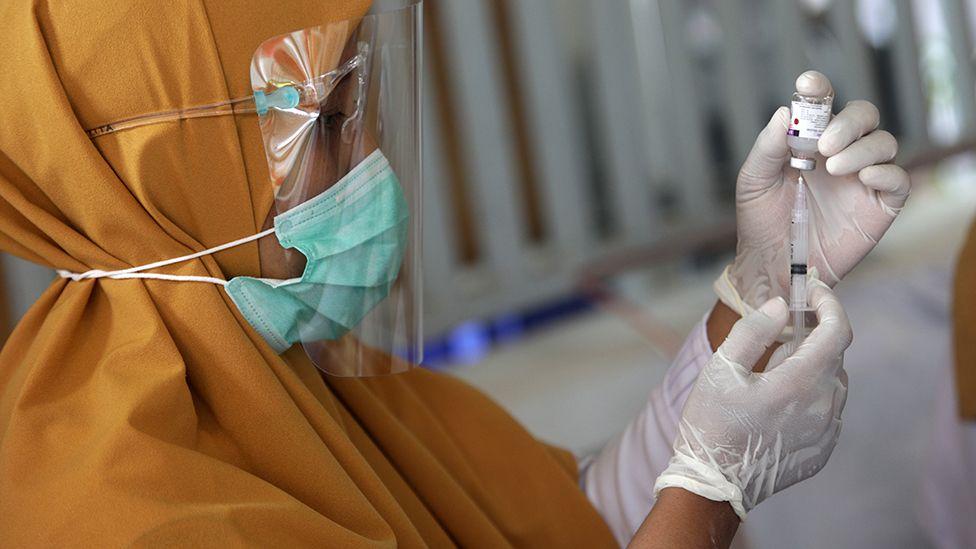 Inclusivity is key to equitable access, distribution, and cost, and a plausible way to achieve this goal is on the table. Access to COVID-19 Tools (ACT) Accelerator is a worthy proposal under consideration by the Group of 20 nations for combating the pandemic. It centers on promoting global cooperation to reduce the spread of the coronavirus disease. Since rich countries hurriedly purchased supplies of the leading vaccine candidates, inventories for poor countries are limited. In this context, ACT is an effort to obtain waivers on proprietary rights, share knowledge, and transfer technology. The hurdle is the provision of sufficient funding, estimated at US$31.3 billion in 2021, to secure 2 billion vaccine doses, treatments, and tests to tame the pandemic.  The imperative is to fill the gap between pledges and actual contributions.

The COVID-19 Vaccines Global Access (COVAX) facility complements ACT. It is supported by the World Health Organization and partners with nongovernmental organizations and drug manufacturers to establish ethically sound distribution of the vaccine at the world level.8  To quell the pandemic, COVAX aims to safeguard against misallocation, foster transparency, and treat vaccines as a global public good. In a globalized era with transnational mobility, distribution of the drug will create a handful of national safe havens. The peril lies in adopting unjust principles and risking reinfection rates that severely hurt the poorest countries.9  To avert paying this high price, more than 190 countries have signed on to the COVAX initiative.10

To sum up, the world is largely pursuing a my-country-first, market-based approach to coping with the pandemic. A course correction is urgently needed. In lieu of vaccine nationalism, the multipronged strategy suggested above constitutes a morally right and politically wise strategy for throttling the global pandemic.

1. The global pharmaceutical Pfizer in partnership with the German company BioNTech,
the multinational firm AstraZeneca based in the United Kingdom, and the biotech corporation Moderna are the leaders so far in developing a vaccine.

4. The literature on philanthropic capitalism is voluminous. Matthew Bishop is often credited with coining the term. See “The Birth of Philanthrocapitalism,” The Economist, February 25, 2006, and Matthew Bishop and Michael Green, How the Rich Can Save the World (New York: Bloomsbury Press, 2008). But it actually appeared earlier in Lucy Bernholz, Creating Philanthropic Capital Markets: The Deliberate Evolution (New York: John Wiley & Sons, 2004). According to Bishop, the philanthropic industry assumes the characteristics of a capitalist marketplace and turns philanthropists into investors.  For Bishop and Green (2008), it involves the application of business methods to philanthropy. More critical perspectives focus on the ways in which the activities of foundations align with neoliberalism. These arguments may be found in Linsey McGoey, No Such Thing as a Free Gift: The Gates Foundation and the Price of Philanthropy (London: Verso, 2015), and Rob Reich, Just Giving: Why Philanthropy Is Failing Democracy and How It Can Be Done Better (Princeton: Princeton University Press, 2018). Picking up on this work, Ryan Burns deems the coupling of philanthropy and capitalism as “a new site for capital accumulation” (“New Forms of Philanthro-Capitalism: Digital Technologies and Humanitarianism,” Antipode 51, No. 4 (April 2019): 1101).