Human beings imagine their own futures, to paraphrase Marx, but they do so in circumstances transmitted from the past. Our political and social institutions were designed for a different era—the era of mass production, cheap oil, automobiles and aircraft, roads and surburbia, radio and television, mass consumption and high military spending. That era, the American dominated model of development, began to falter already in the 1970’s when the United States experienced its first trade deficit and its defeat in Vietnam. The response to decreasing rates of profit was neo-liberalism and privatization—what has become known as market fundamentalism or sometimes globalization. The deregulation of global flows of capital allowed for the spread of new technologies, particularly information and communication, and the rise of new economic centers (most notably China and India), but also grotesque inequalities, the disproportionate growth of finance capital, and the increasing co-optation of states—especially the United States and the United Kingdom—by corporate power.

There is an evident parallel with the 1920’s and 30’s when the British dominated model of development, which relied on heavy industry, railways and ships, newspapers and telegraph, coal, and empire was coming to an end, as well as strong similarities between the crash of 1929 and the crash of 2008. Like now, that crash heralded a rightward, not a leftward shift in politics. Whether we are talking about fascism in the 1930s or the Trump and Brexit phenomena today, we can interpret this rightwards tendency as a failure of the political imagination. It was the inability of the dominant political classes to tell a story that made sense of our present and offered a plausible imagined future, their tendency to repeat a tired rhetoric that contradicted everyday lived experience, that made possible a negative backward looking alternative story. In both the 1930s and today, it was a failure of the left—the belief by the representatives of the left that they needed to compromise with market fundamentalism in order to capture power—that created a gaping hole in the collective imagination. So it was that the new, claiming to be old, scions of the right were able to manipulate nostalgia for a time when our institutions seemed to work and to attribute blame for the breakdown of our institutions on the so-called newcomer, ‘the other’ who has spoiled our golden past. In the 1930s, this kind of thinking led to the rise of fascism and culminated in a war.

So are contemporary developments likely to lead to war? In my view this is highly likely, but, rather than an inter-state war like the wars of the twentieth century, we confront instead what I call a ‘new war’1 on a global basis. A ‘new war’ is a mixture of crime, sectarian conflict, and massive violations of human rights as in the former Yugoslavia or in Libya, Yemen, and Syria today. A new war is a product of backward-looking blame games—the Serbs, for example, who mobilized popular sentiment through an appeal to an imaginary heroic history where pure orthodox Serbs win or lose battles against the evil Turks and genocidal Albanians, or the Salafists who recruit rootless young men with the claim that the corruption of Western capitalism could be solved through a return to literal interpretations of the Koran, or ethnicized Russians who counter the democratic multi-ethnic Ukrainian movement with sectarian narratives. In this type of war, conventional battles are rare and most violence is directed towards civilians—the ‘other’ of this twisted form of political imagination.

The Russians call this type of war ‘non-linear war’. The Russian Chief of Staff, Valeri Gerassimov, explained that frontal assaults are a thing of the past and that nowadays it is possible to destabilize countries through support for domestic opposition, special forces, information warfare, and what the Russians call “political technology” (seen at work in the UK Brexit referendum and the 2016 US presidential election). Indeed, old-fashioned military power has been shown in recent wars to be extraordinarily ineffective, in the classic sense of ‘compellence’. The Iraq and Afghan wars have left both countries with greater instability than before the invasions. Russia razed Grozny to the ground twice yet it is still characterized by criminality and terrorism. The battle against ISIS in Iraq and Syria is producing more casualties than inflicted by ISIS, yet ISIS is already reappearing in liberated areas. Today’s rightwing populism is not primarily directed against other states but against groups (Muslims, immigrants, Mexicans, Jews, blacks…) and against internationalism, especially the United Nations and the European Union. While the Korean crisis is alarming, a different sort of ‘new war’ violence seems more likely. Trump’s behaviour is eerily reminiscent of Milosevic, and it is increasingly pervasive violence of the sort already experienced in the former Yugoslavia, Africa, and the Middle East that could easily come to characterize the US (especially given the availability of guns) and maybe Britain too.

[A]re contemporary developments likely to lead to war? In my view this is highly likely, but, rather than an inter-state war like the wars of the twentieth century, we confront instead what I call a ‘new war’ on a global basis.

The hugely destructive and tragic wars of the twentieth century involved the entire population and profoundly restructured societies; victory was achieved through mobilization around a new narrative based on mass participation that had the potential to shape the new model of development. In contrast, a global new war will be decentralized and fragmented and is likely to increase inequalities, to benefit a few obscenely rich groups, and to entrench backward-looking exclusive ideologies. Casualties are unlikely to be as high as earlier wars but mass forced displacement and widespread environmental degradation has already become normal. Such wars as we have discovered elsewhere tend to spread through extremist ideas, transnational crime, and trauma. They are also very persistent and very difficult to end. 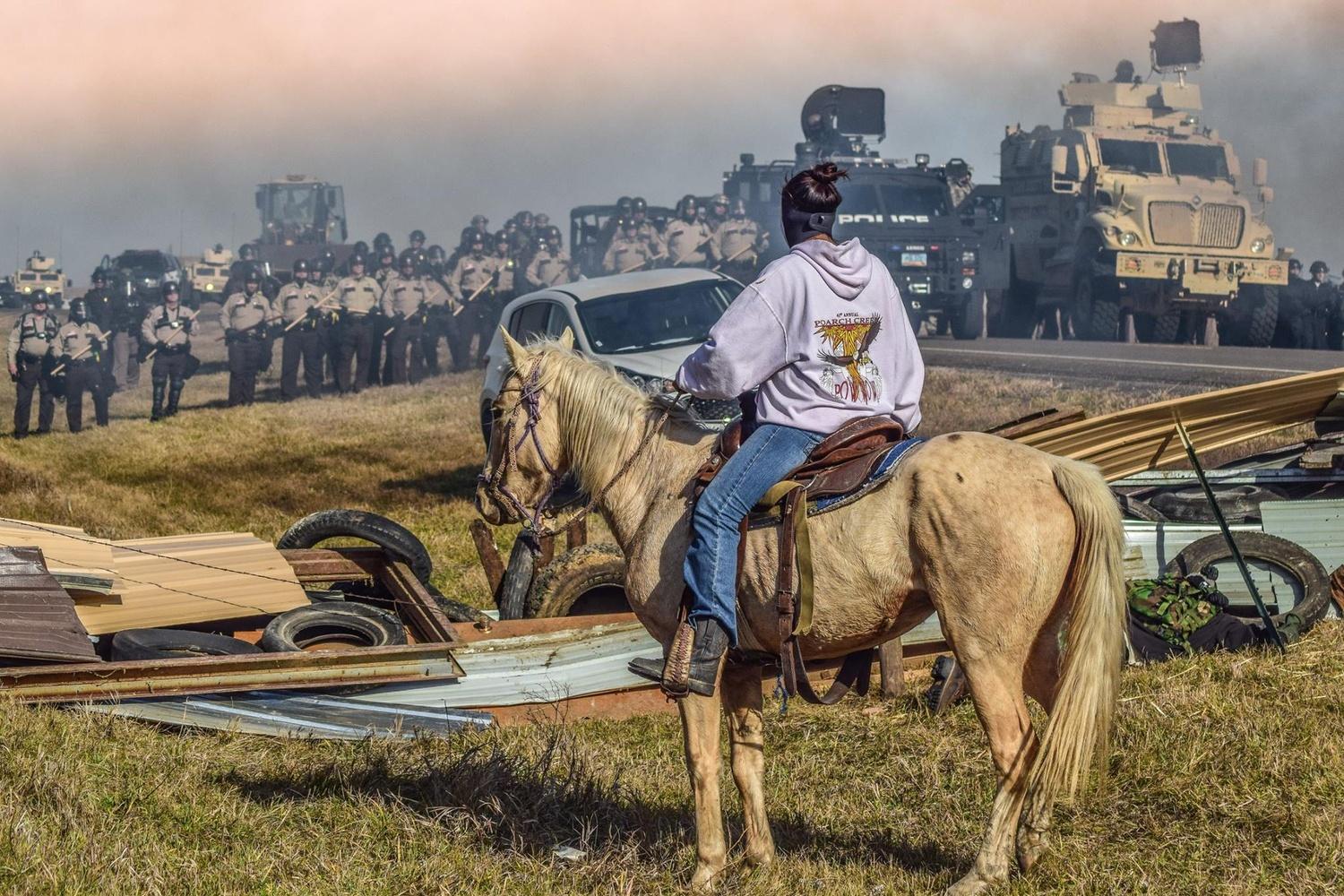 So is there an alternative to a global new war? Can we tell a new story that would enable us to imagine new or reformed institutions that could counter rather than win wars? Such a story would need to be relevant for a global, resource saving, socially just model of development based on information and communications technologies. Writing in 1939, the historian E.H. Carr drew a distinction between utopia and realism in International Relations.2  Utopians propose various international schemes for world peace. Realists analyze the world in terms of states and the military and economic power they possess. Carr argued that the Utopians of the inter-war period had failed to take realism into account even though the realists often found it necessary to clothe their power in utopian language in order to exert power. I think the opposite is the case today. Utopianism, the construction of effective global institutions, is the only realistic option. Putin and Trump clothe their actions in the language of traditional realism (statism and sovereignty) and this can only lead to war and violence. The only way to address the problems that we face today is through a new or reformed set of institutions at international or global and local levels. It is absurd to argue that welfare is no longer affordable when the world has become far richer than ever before. Welfare and income distribution require a reduction in the overall share of finance capital and the regulation of global financial flows so as to protect policy making at local levels. Rich individuals and companies no longer pay taxes. Therefore safe havens have to be closed down and a new family of taxes (on finance, on multinationals, on carbon) need to be raised to redistribute income and pay for global public services like resource-saving infrastructure, peace and human security, and global health initiatives. In new wars, it is at local levels that resistance is most effective, especially among women, allowing some cities and towns to keep out of the violence. At present, cities like London, Seattle, or New York are leading the resistance to right-wing populism; they need to make common cause with each other and with global institutions.

The only way to address the problems that we face today is through a new or reformed set of institutions at international or global and local levels.

Currently, the dominant narratives are polarized between a right-wing nationalist populism and global neo-liberalism. The left is divided between the old nationalist left and those, like Clinton and Blair, who compromised with neo-liberalism. What we need is a new global emancipatory narrative that is global, green, socially just, and realistic, another way of seeing the world not through the national prism but through the prism of lived cosmopolitanism and realistic engagement with the problems we face. It has to resonate with everyday experience and can only be constructed through campaigns and struggles as well as practical implementation. The seeds of this narrative already exist in local initiatives or movements like the global Women’s March on the day of Trump’s inaugural. What is lacking is an imagined institutional framework.

President Barak Obama recently made the point that “this generation is the most sophisticated, the most tech-savvy, the most entrepreneurial, but they do not have much faith in existing institutions.” Is it possible for the political imagination to encompass new sorts of institutions and models of global governance that do not replace the state but restrain its worst aspects—war and fascism—and overcome its limitations in addressing contemporary global issues like climate change or financial speculation? One consequence of Brexit is that a new generation, which had taken the existence of the European Union for granted, is now discovering its European identity, how much it values freedom to work, study, and play across the European Union and how important the existence of the Union is in upholding political, social, and environmental rights. This has produced new movements, debates, proposals, and discussions about how to democratize and reform the European Union. Could something similar happen, for example, in relation to the United Nations as a consequence of the UN vote against Trump’s recognition of Jerusalem as the capital of Israel? In other words, could global governance come to be viewed not as an abstract technical preoccupation of a global elite, but as something that can capture the popular imagination of a new generation—a new realistic utopia?

Mary Kaldor is Professor of Global Governance at the London School of Economics.