On Sex, Mobiles, and Movie Trailers: Contradictions in the Marketing of Feminist Films

A still from Lipstick Under My Burkha. (Source: DNA India)

On Sex, Mobiles, and Movie Trailers: Contradictions in the Marketing of Feminist Films

In recent years we have witnessed an uptick of feminist references in mainstream culture, from female superheroes in movies like Wonder Woman and Black Widow to media celebrities who dare to call themselves feminists like Beyoncé and Emma Watson. With the rise of femvertising, feminism is not only a product and a brand (#womenempowerment, #bosslady), but also an angle to exploit in marketing campaigns, especially when targeted at feminists who now comprise a niche demographic. Nosheen Iqbal summarizes it well in an article for The Guardian, where she writes that “the advertising industry, once bent on selling us sex is now selling us its disgust with sexism” (Iqbal 2015).1  And yet, recent statistics show a pervasive lack of female representation in media industries worldwide, where only 23% of films have a female lead and only 7% of films are directed by a woman.2  The case of Lipstick Under My Burkha illustrates the competing forces in media distribution and promotion that contribute to the under- and misrepresentation of women, not only in media ecosystems in the West but also around the globe.

The Indian film, Lipstick Under My Burkha, a self-identified feminist film that was initially banned for being “lady-oriented,”3 presents an interesting exploration of the ongoing contradictions in the marketing of feminist films. Directed by Alankrita Srivastava, it tells the story of four middle class women, ages 18 to 60, living in contemporary Bhopal, India. Rehana Abidi (Pablitha Borthakur) is a college student struggling to find herself, caught between her family’s conservative background and her youthful liberalism. Leela (Aahana Kumra) is a young beautician who dreams of leaving Bhopal to start her own business with her boyfriend, but she is already engaged to somebody else. Shireen Aslam (Konkona Sen Sharma) is a saleswoman who hides her successful entrepreneurship from her abusive and unfaithful husband. And, Usha (Ratna Pathak) is a widow and owner of the sweetshop Hawai Manzil, who after meeting her nephews’ swimming coach, starts taking lessons from him and engaging in late-night sensual phone calls. Lipstick Under My Burkha is a film about desire: the desire for self-determination, independence, self-reliance, and, of course, sexual pleasure.

The film was initially refused a certificate for exhibition, without which it could not play in movie theaters in India. Under the reasons for refusal, the letter from the Central Bureau of Film Certification (CBFC) noted: “The story is lady oriented, their fantasy above life. There are contanious [sic] sexual scenes, abusive words, audio pornography, and a bit sensitive touch about one particular section of society, hence film refused under guidelines 1(a), 2(vii), 2(ix), 2(x), 2(xii), 3(x).”4  The letter shows that the certificate’s denial did not refer to the display of sex in and of itself, but rather was due to the combination of sex imagery and female fantasies. The CBFC’s censorship of the film caused a media uproar in India and abroad. Finally, upon appeal the film was granted an A certificate after minimal cuts and was released in theaters on July 21, 2017. Amazon bought the digital distribution rights and the film became available on their platform on August 15th.

As a response to the CBFC’s initial decision the film promoters released a second poster showing lipstick held up in a hand so that it appears to be giving the middle finger. But this wasn’t the only provocative promotional material circulated for the film. The marketing of Lipstick Under My Burkha reveals contradictions with the film’s feminist message and its desired universal audience. The film invites viewers to look at sex and sexuality differently from depictions that tie it to marriage, reproduction, violence, or the male gaze. But this message is at least partially thwarted by its own marketing campaign.

In the trailer, the use and arrangement of the images present a problematic representation of the film. It sets up one particular feature of Shireen’s story-line, the “love-triangle” between herself, her husband, and her husband’s mistress, but it disregards a critical aspect of this character: her desire and aptitude to become a saleswoman (and with it all the implications of agency, financial independence, mobility, etc). Also, the images used in the trailer are manipulated to titillate the viewer’s sexual imagination. 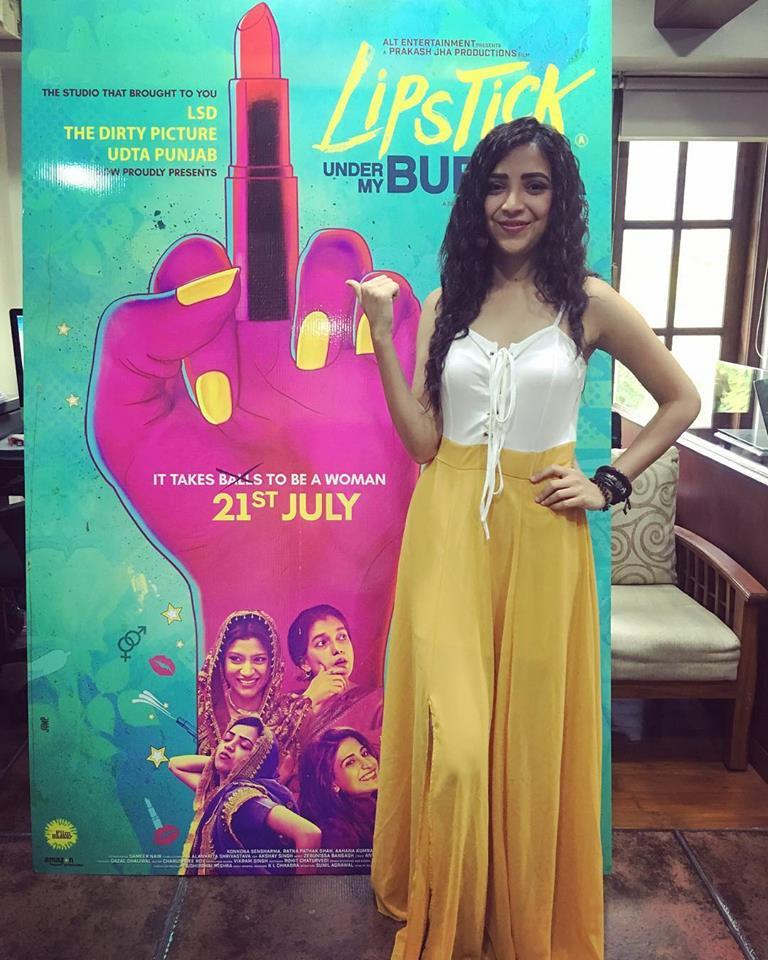 Marketing poster for Lipstick Under My Burkha. (Source: the author)

The trailer paints Shireen as a conservative Muslim woman who is curious about having a satisfying sexual life. This is accomplished by re-arranging images out of context and by sexualizing acts that were not sexual in the film. Juxtaposing the clip of a couple having sex with the subsequent clips of women eating informs these images as also sexual, as signaling an oral fixation. This editing echoes advertising techniques, especially in print media, that concentrate on women’s mouths to make their images sexually suggestive.

Not only are these juxtapositions faulty but so is the de-contextualization of these images. Watching the film, it becomes clear that in the brief sex-scene shown in the clip, Shireen is not looking away out of boredom. Rather, she is being sexually abused by her husband. To dislocate these images outside of their context removes the depth of female characters and their stories. The editing of the trailer reverts to cinematic codes that imply and favor a male gaze: the arrangement of shots, the exploitation of kissing and sex scenes, the moaning, the oral fixation, and the displays of skin.

Working with a limited budget, the marketing team decided to invest in campaigning on digital platforms. Lipstick’s director and cast participated in sketches and interviews with several media outlets that exist exclusively online, including MissMalini, ScoopWhoop, Buzzfeed, and All India Bakchod. Lipstick also created two hashtag campaigns #lipstickrebellion and #menforlipstick in which women and men were encouraged to upload to Instagram or Twitter a picture of themselves holding lipstick in imitation of the poster’s hand gesture.

The editing of the trailer reverts to cinematic codes that imply and favor a male gaze.

The reach and cost efficiency of digital marketing suggests a growing digitally savvy intended audience. However, as more money is spent on digital marketing campaigns the industry runs a risk of over-estimating, or willfully ignoring, those left behind in the digital revolution. Digital penetration in India is indeed growing at a very rapid rate: in 2017, India went from being ranked 150th in worldwide mobile brand data consumption to number one (Ambani, 2017).5  And while it makes economic sense to prepare for a more digitally savvy audience in the near future, doing so may result in neglecting people currently outside of digital reach.

Zara (not her real name), a member of Balaji Entertainment’s marketing team for Lipstick explains: “We knew our audience would be the A/A+ segment of metros… A, A+. That is most cream crowd. Sobo, [South Bombay] Town, Townies.  Or people with a lot of spending power. […] Not even upper middle class, more than that” (interview, 2017). The group that Zara describes is an extremely narrow segment of the potential audience, especially if we consider that within this group they were targeting primarily women. This shows the continued juxtaposition of class, taste, and aesthetic value where middle-class viewers are set against working class audiences.6  This distinction conflates urbanism with education, taste, and liberalism, which in turn fosters a monolithic assumption that the Other is uneducated, conservative, and lacking cultural refinement.7 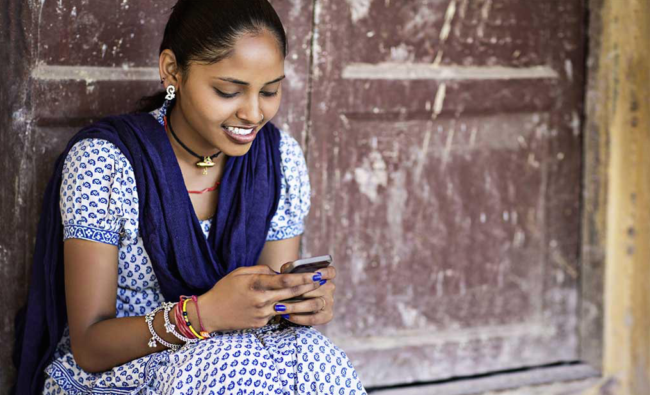 Moreover, audiences outside of the metros are not given a chance to see these films in movie theaters. They are either not distributed or not promoted in their areas. Considering that the success of a film is directly linked with its box-office gains, then if audiences do watch them via pirate copies or on television, their ability to demonstrate their interest via consumption, by paying to see these films, has been denied from the beginning.

In an ironic turn, this branding of a potential audience as Other manifested not only in the assumption about what they would consume but also about what they need. Zara mentioned that the masses “are the people that really need to see this kind of movie,” yet she offered no reflection on the role that she herself was playing in restricting this demographic’s access to the film. Even though many team members believed in the power of films like Lipstick to advance the discourse about gender equality and female empowerment, or in their words, to “challenge the patriarchy,” their responsibility ended at doing their job of promoting the film within profitable demographics.

[While] many team members believed in the power of films like Lipstick to advance the discourse about gender equality and female empowerment... their responsibility ended at doing their job of promoting the film within profitable demographics.

Lastly, the characters in Lipstick do not correspond to the socio-economic class that they tried to attract to the theater.  Instead, the story is about four middle class (not “A/A+”) women living in the relatively small city of Bhopal. By setting the film outside of the viewer’s geographical and socio-economic position it further aggravates the Othering discussed above. While the story can be read as “exposing a reality” within India, it also runs the risk of making the Other a mere object of consumption rather than someone to engage in a meaningful way. It suggests to viewers that this is the reality that happens “over there” in those small towns where the movie ought to be shown but where supposedly no one would watch it.

Lipstick’s marketing campaign exposes the complex media ecosystem of competing forces that can delay the distribution of feminist films, dilute their message, and restrict their reach. By denying movie-goers the opportunity to manifest their interest through the agency of purchase, the fallacious validity of the question “who would watch this?” is perpetuated.

Zeltzyn Rubi Sanchez Lozoya is a PhD candidate in the department of Asian Cultures and Languages at the University of Texas, Austin.