Borges today is a global phenomenon; his stories have been translated into dozens of languages and made into films. The adjective “Borgesian” is almost as familiar as “Kafkaesque” or “Proustian.” The story of Borges’s move from the relative periphery of Argentina to the centrality of literary fame is a textbook example of the pattern described by Pascale Casanova in her celebrated World Republic of Letters. Borges achieved global status through translation, first into French in the 40s, then, decisively, into English beginning in the 60s, after he shared the Formentor prize with Samuel Beckett in 1961. The final three decades of Borges’s life crystallized the iconic image of the peripatetic blind writer, endlessly touring the world and packing auditoriums from Harvard to Tokyo.

But of course, cosmopolitanism had been foundational to Borges’s inspiration from the start. Half English on his father’s side, Borges spent his formative years in Switzerland and Spain; bilingual from birth, he learned to read in both English and Spanish; a polyglot, he learned German, French and Latin as a youth in Geneva, later adding Italian and Old Norse; he devoted his last weeks, as he was dying of cancer in Geneva, to learning Arabic. Although he lived most of his life in Buenos Aires, his literary references were similarly broad. His stories take us from medieval Spain to nineteenth century Uruguay, from China to Ireland, from Nazi Germany to the Roman empire. The same is true of his essays, which range from Flaubert to John Wilkins, from tango to the Kabbalah. An enduring interest was Buddhism, the subject of one of his earliest essays (“The Nothingness of Personality,” 1922) to one of his last lectures (“Buddhism,” in the Seven Nights, 1980) and much in between. Borges’s knowledge of Buddhism was shaped by his father’s library, which contained a wealth of nineteenth century Orientalist scholarship.1  Although he later updated some of his sources,2 his knowledge of Buddhism was deeply rooted in Victorian materials. These were not only scholarly: he first discovered Buddhism as a child in Sir Edwin Arnold’s best-selling poem The Light of Asia, or the Great Renunciation. This work, a retelling of Buddha’s life in a long romantic narrative poem, made a profound impression on him.

If Buddhism was a lifelong engagement for Borges, the essays he wrote in the 1950s appear to be especially significant, as they were written during a decade of deep personal and political crisis. Politically, Argentina was in the grip of Perón’s authoritarian, populist, hypernationalist regime. Borges found himself in the opposition, lost his job, and was publicly humiliated, while his family was harassed or jailed. On a personal level, his blindness became nearly complete, bringing about an inward turn in his writing style (now more dependent on memory), yet also an outward turn in his lifestyle as he became a reluctant international celebrity. Among the essays on Buddhism, two stand out as especially meaningful: “Forms of a Legend” (1952), devoted to the transcultural adaptations of the Buddha legend, and “Dialogues of Ascetic and King” (1953), focused on the archetypal recurrence of this confrontation. Central to Borges’s reading is a focus on the Renunciation story’s global circulation. These two essays in turn intersect meaningfully with the famous polemical essay “The Argentine Writer and Tradition” (1951), which takes issue with the stifling nationalist aesthetics championed by Perón supporters and claims for Argentine writers the right not to limit themselves to Argentine themes, but to borrow freely from any tradition. “We must believe that the universe is our birthright and try out every subject,” Borges defiantly proclaims.

Clearly, in Borges’s mind, the story of the Great Renunciation, as a story, is connected to larger aesthetic, theoretical, and formal questions. Not coincidentally, “Forms of a Legend” discusses a tale that travelled globally, generating large numbers of texts in numerous languages: the story of a king who leaves his palace to become a wandering ascetic. Borges traces the legend’s itinerary from East to West, giving an elegantly streamlined version of the story’s circulation in space (from India to Iceland) and time (from the Jataka tales to the medieval Golden Legend and beyond). From its Indian source, the story passed into Muslim and Christian culture, transforming itself into the story of Bilawar and Budasaf and the story of Saints Barlaam and Josaphat, with multiple variants from Italy to Scandinavia. “Reality may be too complex for oral transmission; legends recreate it in a way that is only accidentally false and which permits it to travel through the world from mouth to mouth.” Sir Richard Burton, translator of the 1001 Nights and one of Borges’s heroes, put it more succinctly: “Tales have wings.” 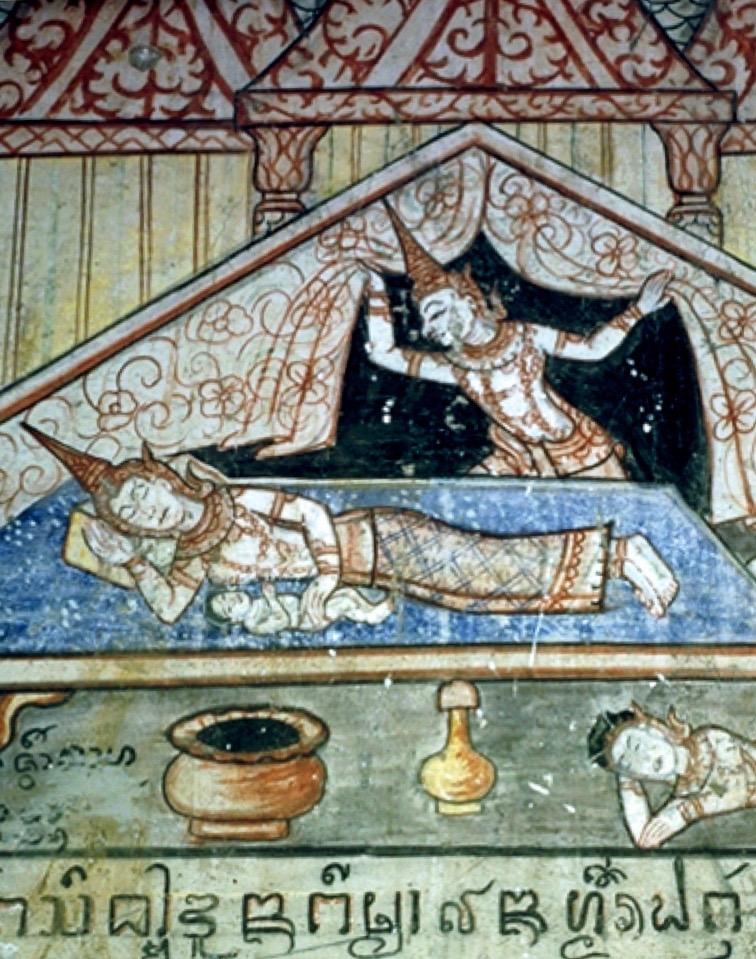 From the notion of a traveling legend Borges moves to the notion of “archetype” in the second essay, “The Dialogues of Ascetic and King.” He writes: “A king is a plenitude, an ascetic is nothing or wants to be nothing, and so people enjoy imagining a dialogue between these two archetypes.” Taking as its starting point Siddharta’s fourth and final encounter with an ascetic, which triggered his epiphany and change of life, Borges underlines both the dialogue’s archetypal recurrence and its East-West circulation, listing numerous famous pairs—Siddharta and the nameless monk, Milinda and Nagasena, Heraclitus and Darius, Diogenes and Alexander, among others—as transcultural variants of the archetype.3  At the same time, Borges also abstracts this global diversity back into a basic pattern, identifiable in each of the variants.

The essay concludes with an allusion to Goethe’s morphological theory: “These texts, scattered in time and space, suggest the possibility of a morphology (to use Goethe’s word) or science of the fundamental forms of literature. I have occasionally speculated in these pages that all metaphors are variants of a small number of archetypes; perhaps this proposition is also applicable to fables.”

Goethe, the inventor of Weltliteratur and the foundation of today’s contemporary debates about World Literature, also left an important body of scientific works. The notion of morphology was central to his botanical writings. Goethe’s Urpflanze theory developed an ideal or archetypal plant from which all plant diversity stemmed.4  Borges knew enough about Goethe’s morphology, whether directly or indirectly, to be aware of its later metaphorical extension to various cultural contexts.5  Borges’s speculations on the story of Buddhism are intertwined with reflections on literature as infinite variations on a finite number of basic modules, whether metaphors or plots.

…in Borges’s mind, the story of the Great Renunciation, as a story, is connected to larger aesthetic, theoretical, and formal questions.

Thus, the Borgesian “speculation”—a favorite word in Borges, who always wears his erudition lightly—on the global circulation and transformation of archetypal forms such as the Renunciation story is richly woven into the intellectual conversations of the time, especially the beginnings of structuralism. Morphology also provided Borges with a serviceable method of composition. Stories branch off into other stories by variation, repetition, recombination of patterns. See, for example, the recurring stories of royal abandonment resulting from the confrontation of a king and a poet (a Borgesian variant of the ascetic): “Parable of the Palace,” “The Two Kings and the Two Labyrinths,” and “The Mirror and the Mask,” written decades apart and set respectively in China, the medieval Islamic world, and ancient Ireland. All of them can be read as variations on the Buddhist Renunciation story. 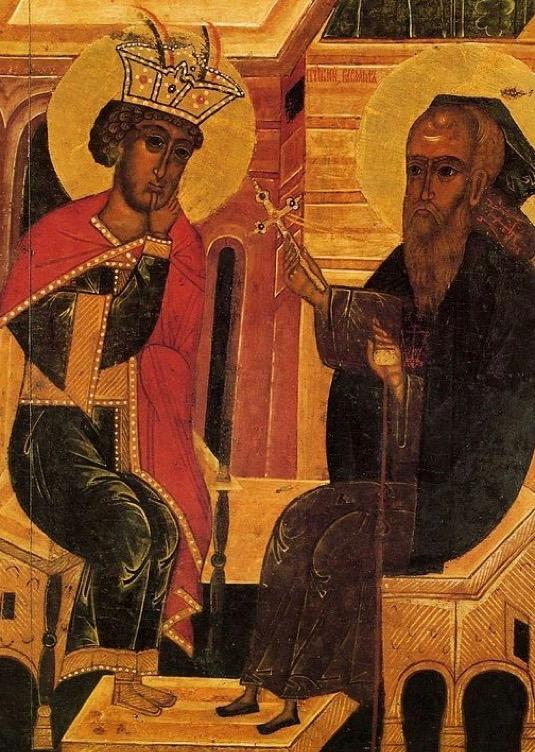 Politically, the confrontation of king and ascetic possesses the appeal of paradox: it culminates in the triumph of the poor over the rich, the powerless over the powerful. The king meets his match in the ascetic who fears nothing because he desires nothing and can speak truth to power. While the autobiographical investment is clear, it also aligns Borges with some of the key contemporary political philosophers, in particular Michel Foucault, whose early Order of Things claimed a seminal debt to Borges, and whose final works turned to ancient Cynics and the Greek notion of parrhesia, or political truth-telling. Beyond Foucault, Borges’s engagement with renouncer figures interfaces more generally with the contemporary revival of philosophical interest in the Cynics, for example, Peter Sloterdijk’s Critique of Cynical Reason, which defines philosophical wisdom as the rejection of the principle of power.

Stories travel along the Silk Road like material goods. That Diogenes’s famously rude dismissal of the powerful Alexander (“Get out of my sunshine!”) owes something to the Buddhist legend of a king who leaves his palace to become an ascetic is a compelling thought, because it speaks to a transcultural impulse—what Geoffrey Galt Harpham called the “ascetic imperative”—that leads us to structure our idea of power in terms of dialectical absolutes. Ultimately the two figures are reversible. Borges reminds us of their “secret kinship” by alluding, repeatedly, to “another king of the Sanskrit era who left his palace to beg alms in the streets, and who said these dizzying words: ‘From now on I have no kingdom, or my kingdom is limitless’.” 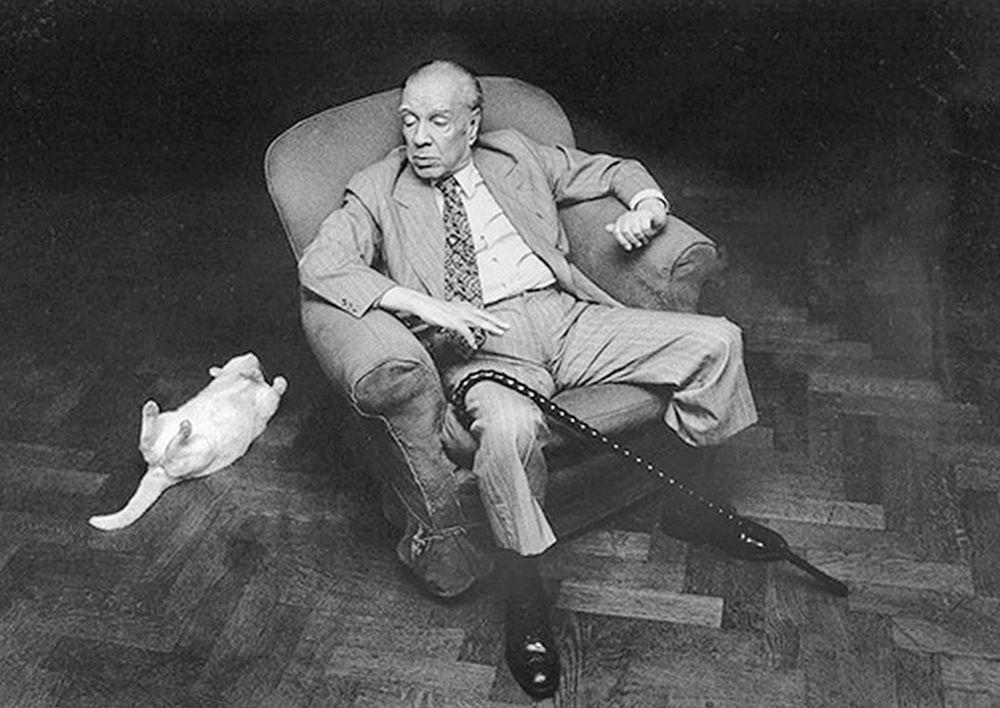 Leaving the palace to wander the world is what Borges’s writings do. The archetypal king-and-ascetic trope applies metatextually to the Borgesian view of world literature: like the king wandering out of his palace to beg from strangers, a writer leaves behind the comfort but also the limitations of national tradition to “beg” from other languages and literary cultures. No longer tied to one tradition, his kingdom becomes the world, his birthright, the universe. The Borgesian model, where stories morph and circulate across time and space, resonates with contemporary strategies of global reading, anticipating David Damrosch’s definition of world literature as not a corpus or a canon, “but rather a mode of circulation and of reading,” or Wai-Chee Dimock’s description of the centrifugal trajectory of canonical texts. It is also rather more radical, proposing an image of literature as impersonal, metamorphic, and globally replayed.

1. The collection included such Victorian luminaries as T.W. Rhys Davids, Max Müller, Hermann Oldenberg, and of course the 1911 Encyclopedia Britannica.

2. The book he co-authored with Alicia Jurado in 1976, Qué es el budismo?, references Edward Conze and Daisetsu Suzuki, and gives pride of place to Zen Buddhism, experienced during a trip to Japan with his future wife, María Kodama, of Japanese descent.

3. Borges does not mention and was perhaps unaware of the rich iconographic tradition depicting king-and-ascetic dialogues, from Indian miniatures to medieval illuminated manuscripts or Baroque portraits of Cynics.

4. “With this model (…) an infinite number of additional plants can be invented,” Goethe wrote to Herder in 1787.

5. These range from historiography (Oswald Spengler’s morphological history is a frequent reference in Borges’s writings), anthropology (Claude Lévi-Strauss’s notion of mythemes or Mircea Eliade’s theory of archetypes come to mind), or literary theory (from Vladimir Propp’s modular conception of folktales to André Jolles’s ‘simple forms’), to name only a few.

Damrosch, David. What is World Literature? Princeton: Princeton UP, 2003.

Foucault, Michel. The Courage of Truth (the Government of Self and Others II): Lectures at the Collège De France, 1983-1984. Houndmills, Basingstoke, Hampshire, UK: Palgrave Macmillan, 2011.

Dominique Jullien is Professor of Comparative Literature and French Studies at the University of California, Santa Barbara.