Mountain Ports in Nepal and Bhutan: Imagining Global Hubs in the Highlands

Mountain Ports in Nepal and Bhutan: Imagining Global Hubs in the Highlands

Globalization in the form of market driven economic systems is all about purchasing power and the ability to trigger effective demand. There is no ‘life’ in Kathmandu, Delhi, Beijing, Hanoi, or Tokyo if one’s pocket is empty. Forty years back, all the time-passing games in mountain areas during students’ winter vacation used to have something to do with nature, where no one really needed to wager cash. From a simple blindfolded game like ‘Am I right?’ to rolling a marble into a small target hole, to setting up small green bush-covered camouflaged camps on the hillocks to sit, gossip, and cook the freely available roots and vegetables, these were largely social occasions which everyone enjoyed thoroughly. The core of these activities, of course, was understanding and harnessing nature, mental alertness, enhancing physical capacity and social intelligence. None of these games could be bought and sold yet they gave immense, long-lasting satisfaction.

Back in Darjeeling, my home town, holidays and festivals like Saraswati puja, Buddha purnima, Bhanu jayanti and Vishwakarma puja, along with Dashain, Tihar, Maghe and Sawane  sankratis, and Christmas, provided the best opportunities for all to gather, enjoy, and reconnect. The concept of ‘samaj’, a local community institution, was very critical to people’s socio-cultural and political mobilization. Every village had a ‘samaj’ which embraced all castes, races, religions and languages. Each ‘samaj’ had a stock of utensils, musical instruments, disaster management knowledge, social service responsibilities, water distribution channels, and more critically, collective knowledge of traditional medicinal systems. Everything seemed to be happening so smoothly as the systems were well set and abided by all. There was very little government around. Most people shared a sense of imagination and enjoyed dreaming. Both of these subjective possessions actually do not cost anything except mental and spiritual engagement.

It was partly this imagination and dream-infused living that brought the British colonial vestiges to Darjeeling and started the famous Darjeeling tea, the world-celebrated cinchona plantation for anti-malarial drugs, and a Himalayan railway, mostly between the 1850s to 1880s. This is when for the first time Campbell, Hooker, Aitchison, Lloyd, Grant, and Eden all came together to start mountain ports far away from riverine and sea ports like Calcutta and Chittagong. They also brought military, educational and religious institutions and practices that began to influence local populations. The ‘Lahures’—Gorkha army recruits in India, Nepal and other parts of the world—soon were dreaming of crisscrossing marine frontiers and mountain topography. Their valor and single-mindedness would become legendary, stretching even to the present era when they were called upon to provide security at the 2018 Trump-Kim summit in Singapore. It was more than their physical abilities that made them legendary; it was also their nature driven mountain habits of incessant imagination and versatile dreams. These syndromes are well covered in mountain literature. The acclaimed Nepali poet Laxmi Prasad Devkota once wrote, “imagination is actually the heart of happiness.”

Two astoundingly beautiful and largely virgin mountain geographies, Bhutan and Nepal, stand to gain most from the concept of mountain ports. Both these countries are bio-diversity hotspots, the vanguard of ‘free’ natural oxygen, and also considered as civilizational centers in the Eastern Himalayas. Bhutan’s young Monarch and Nepal’s present Prime Minister have shown tremendous depth of imagination and breadth of dreaming in their public discourses. It is this creative instinct that sets them apart from humbug socio-political rigmarole. Both tend to abidingly promote the core of mountain cultural ecology and geo-morphology as a strategic element in their nation-building projects. If Bhutan continues to mesmerize the global community with the concept of “gross national happiness” and Nepal protractedly harps on a Trans-Himalayan multi-dimensional connectivity network, both of these leaders could provide a new discourse and orientation to the idea of mountain ports. Although the most widely shared definition of ports—both dry and marine—primarily stresses connectivity, exchange of goods and services, and the movement of people and technology, mountain ports could trigger a new direction for the idea of port by primarily focusing on nature, knowledge, community, and technology.

Today’s global world is insatiably hungry for something natural, much deeper than the din of factories, far away from urban congestion. Americans in New York and Germans in Hamburg imagine and dream of moving away from the pestering atmosphere of urban centers to Machu Picchu in Peru and Karakoram in Pakistan. The Japanese do exactly this when they dive into the ‘onsen’ hot springs of Hakone in Kanagawa. When Mamta Banerji came across Lamahatta in Darjeeling, her imagination knew no bounds. For at least a few moments she was enlightened, just floating, borne up in wild imagination and thoughtful dreams. Narendra Modi realized this very beauty of joy and height of tranquility in the Himalayan caves of Kedarnath shrine.

mountain ports could trigger a new direction for the idea of port by primarily focusing on nature, knowledge, community, and technology.

Consequently, mountain ports could be focused on local or national history, on their unparalleled advantages and uniqueness. Nepal and Bhutan could lay out a range of mountain ports across the country. It is worth investing in these ports, as has been proved by prolific sea ports across the world. Such mountain ports could trigger huge global attention, and investors and philanthropists might throng to them. These ports could also induct transforming connectivity to crucial geographies. Can Bhutan and Nepal have Centers of Excellence on climate change situated in their alpine topography? No country would have the wherewithal and natural advantage that these countries do for this kind of undertaking. Moreover, they could focus on a wide range of issues and concern, from agricultural heritage to glaciology, wildlife protection to animal husbandry, new strains of diseases and disasters to transhumance, rural livelihood to genetic degeneration and tea to quinine, like that of Darjeeling. For instance, might not these two countries put together a mountain veterinary school that emphasizes the welfare of livestock and vanishing wildlife amidst the far-reaching impact of climate change?

When the then Prime Minister of Nepal convened a meeting of his cabinet on global warming and climate change at Kalapatthar, the base camp of Mount Everest, in 2009, it was refreshing news. For the first time Nepal tried to demonstrate and assert its core competence. The Chinese, Dutch, Kyrgyz and Australians are all looking for such expertise and facilities. This could actually be a starting point of the much-ignored globalization of local knowledge, community adaptation and monetization of invaluable mountain wisdom. And it would reverse the existing and overwhelming trend of localization of globals (like Hyundai, Airtel, Pepsi, and Louis Vuitton). Encouraging this globalization of locals could generate a huge wave of entrepreneurship and commercial ventures. Only then would a Sikkimese farmer’s knowledge for treating the Chirke-Phurke virus with cardamom plant radiate out to communities in Latin America and Africa.

Can Nepal develop a history museum as a mountain port by waxing eloquent on the valor of the Gorkhas in war? Can Bhutan develop a mountain port based on the history of Monarchy at Punakha? There is ample scope to develop these mountain ports in the entire Himalayan frontiers of India too. They could include archaeology, architecture, hydro power, trade and pilgrimage routes, textiles-fashion and ornaments, musical instruments, information technology, mountain sports, bio-technology, traditional medicinal practices, bio-diversity, and ethnicity. Any of these activities could lend themselves to a specialized, well-designed mountain port in the seven provinces of Nepal and twenty dzongkhags of Bhutan. They could build skills and capacity among the younger generation, proliferate related institutions, facilitate access to global markets, refurbish indigenous research and development, and, more critically, harness the unexplored potentials of these mountain nations. 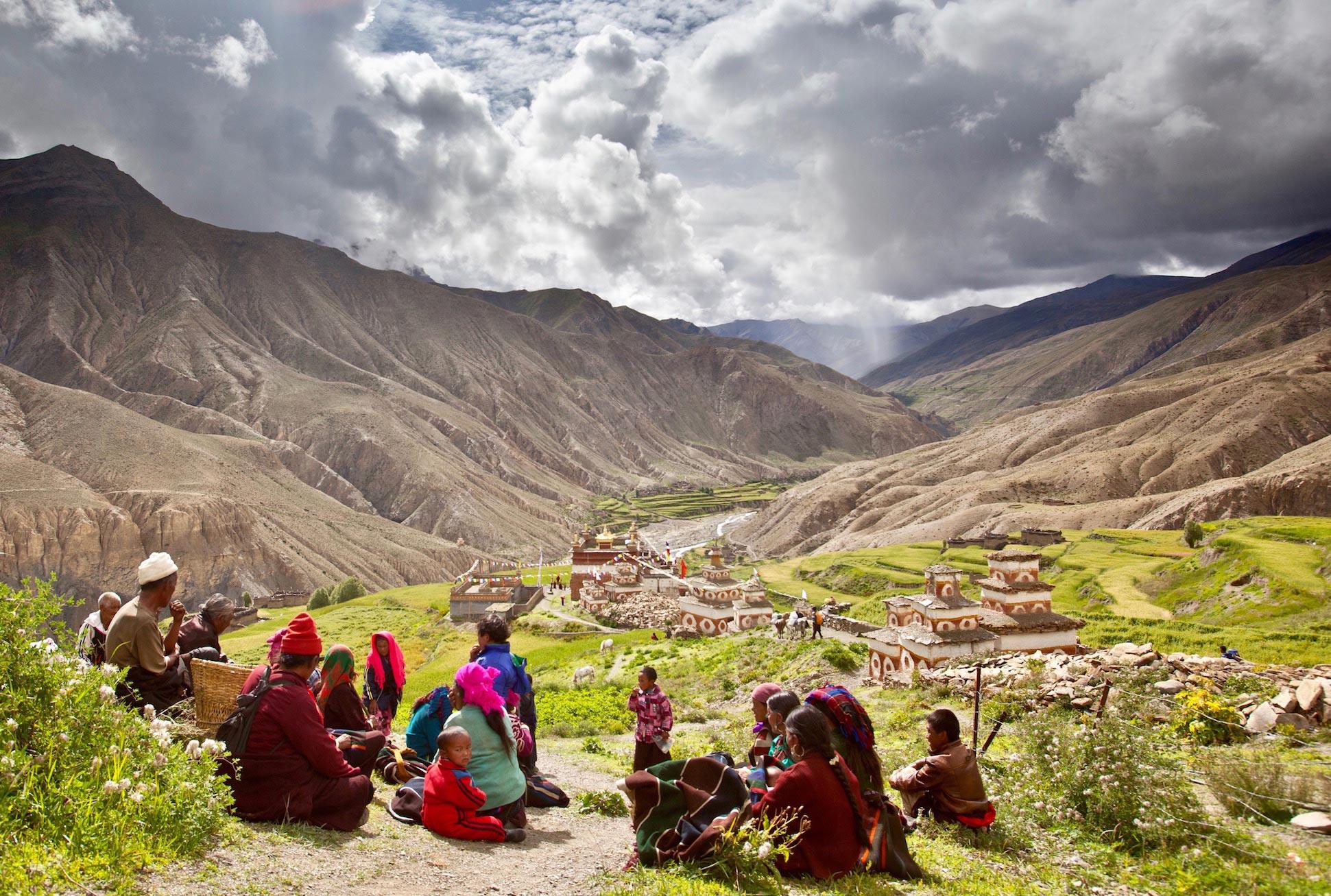 Students, teachers, civil society members and professionals from across the world would come to Nepal and Bhutan for various courses, programs, and training workshops, which would also help to reverse the brain drain process and bring global leadership to these mountainous countries. Unlike the past, the so-called Least Developed countries could lead the global discourse on mountain regions. This is where the Bhutanese Monarch and the Nepalese Prime Minister could start the process of transforming their countries into global players. The Indian mountain leaders have a pivotal role in interconnecting these initiatives. Here too, imagination and dreaming are the key.

The author drafted the First Plan of the Darjeeling Gorkha Hill Council in 1989 as well as plan and budget documents for the Government of Sikkim during 2000-2007. He has served as a member of the Indian Prime Minister’s Task Force on Hill and Mountain Development under the aegis of the National Planning Commission.