In early 2020, when COVID-19 was tearing through China, it was hard to imagine that it would develop into a global pandemic so rapidly and reach New Zealand, a country geographically isolated from most of the world. After the first confirmed case on February 28, 2020, the spread of COVID-19 escalated rapidly with confirmed cases surpassing 1,000 in five weeks, most of them related to international travel. Nevertheless, with a progressive government response, the country took less than one-and-half months to halt COVID-19’s spread. On May 11, a seven-week nationwide lockdown was lifted following two consecutive days of zero new cases. To date, most domestic economic activities have resumed.

As of May 25, 2020, statistics suggest that New Zealand’s response to the pandemic is largely successful, as shown by the low confirmed and probable case numbers (1,504) and deaths (21), and the high rate of recovery (1,456) and testing (261,315).1  However, this positive result did not come easily. At the outset, the government’s response to this emerging public health crisis was relaxed and reluctant. This situation started to change during March as evidenced by the enforcement of much tougher border control measures and domestic orders. The specific turning point was 14 March, when the compulsory self-isolation policy for all international arrivals began to be enforced. Since then, New Zealand has been leading the COVID-19 response in Oceania. “Unite against COVID-19” was adopted as a widely used official slogan to combat the pandemic. The slogan implies the determination to unite people across the nation, including ethnic minorities, to eliminate the virus (Cousins, 2020). This essay discusses the driving force behind the changing discourse of the government’s response to the pandemic and the factors that led to its success.

At the onset of the pandemic outbreak, New Zealand’s COVID-19 response was lackluster. It had few if any signature policy measures but merely kept pace with its closest ally, Australia (Castalia, 2020). For instance, three days after Australia implemented a travel ban on foreign nationals travelling directly from Mainland China on January 31 2020, New Zealand imposed a similar travel ban. The pattern was maintained when both countries enacted travel bans on foreign nationals travelling from Iran and Italy (RNZ, 2020). This situation is not surprising, firstly, due to the historical and geopolitical connections between New Zealand and Australia, who often adopt similar approaches to dealing with international and domestic affairs; secondly, the government might have had limited information for setting up a pandemic response at the onset. Nonetheless, the details of rolling out these travel bans signal far more profound problems.

First of all, when New Zealand implemented a travel ban on China on February 3, there was no single confirmed case from China or via China (RNZ, 2020). The travel ban on Iranian travelers was started promptly on the same day that health officials first announced a confirmed case from Iran, on February 28. However, after the first New Zealand case from Italy was confirmed on March 4, the government did not adopt a single border measure monitoring travel between the two countries until March 11, the day after a nationwide lockdown was implemented in Italy. Similar border responses were enacted vis-a-vis many other Western countries during New Zealand’s early COVID-19 outbreak, such as the USA and Australia, which are actually major COVID-19 case sources for the virus’ development in New Zealand. Although some pandemic experts and ethnic communities, especially as the Chinese community,2 requested that the government enact more restrictive border measures (Cardwell, 2020; Zeng, 2020), it was not until March 20 that a full-scale border closure to all non-citizens and non-residents was enforced (RNZ, 2020).

Therefore, it is fair to say that there was a clear disparity in the implementation of New Zealand’s border measures. Its underpinning is largely political and ideological, which contributed overwhelmingly to border decisions during the early stage of the pandemic response. But viruses do not care about politics or ideologies, and as a result, the early reluctance to implement border restrictions on many Western countries is the major reason for the arrival and spread of COVID-19 in New Zealand. Ideological positions stopped the country from eradicating COVID-19 earlier. Cases showing a very similar politically-driven pandemic response pattern can be found in many other places during the early stage of COVID-19 outbreaks, such New York State in the USA.

Media reports described New Zealand’s measures to combat the pandemic as some of the toughest in the world.3  The uptake of restrictive measures to contain COVID-19 was driven by the disastrous effects of the pandemic in Europe and the pressing concern that without proactive measures, the country’s medical system would be quickly exhausted (Daalder, 2020). From the middle of March, the government abandoned its previous approach to handling the pandemic and initiated tough measures. The threshold date is March 14, when a compulsory self-isolation policy was enforced. As already indicated, the full-scale border closure to all non-citizens and non-residents was enforced starting March 20. The next day the country introduced a domestic alert-level system to specify public health and social measures. Subsequently, a nationwide level-4 (the highest) lockdown was in place starting on March 25. The decision-making on these border controls and domestic orders was prompt, powerful, and comprehensive.

[T]he early reluctance to implement border restrictions on many Western countries is the major reason for the arrival and spread of COVID-19 in New Zealand.

New Zealand’s success in combatting the pandemic is also related to the government having largely followed COVID-19 response guidelines from the World Health Organization (WHO). This is contrary to the USA, which has aggressively criticized the WHO and accused it of mismanaging and covering up the spread of the disease. Evidently, the WHO’s guidelines for combating COVID-19 do work, and New Zealand is one of the successful examples. For instance, following the WHO’s suggestion that testing every suspected case is essential for successful pandemic control, New Zealand has put forward extensive testing nationwide screening for COVID-19 cases, and boasts by far one of the highest testing rates in the world per capita.

Moreover, instead of engaging in controversial political disputes, New Zealand chose to pay more attention to effectiveness and efficiency to combat COVID-19. When several countries planned to request an inquiry into China’s role in the origin of COVID-19 and the corresponding political conspiracies (Bisley, 2020; The Strait Time, 2020), the government chose to act apolitically and independently. The focus of the government has consistently been on “getting the COVID-19 plague out of our lives.”4  The country’s relatively neutral attitude towards the controversial political dispute around the pandemic is partially because of its coordinated diplomatic relationship with China. As a small island country located in the middle of the South Pacific sea, New Zealand has no direct geopolitical conflict with China. In the economic sphere, China is New Zealand’s second largest trading partner and is crucial for its economy, which largely relies on exports to its Asian neighbor countries. In addition, New Zealand had taken a critical view of the US policies towards China and sought to distance itself from the US, factors that have influenced its relations with China since around the new millennium (Brady, 2008). This relatively neutral attitude not only benefited the containment of the pandemic, but also paved the way for the small country to sustain a positive and constructive relationship with China in the future, particularly for its post-COVID-19 economic recovery.

Another key reason for New Zealand’s success in containing the pandemic is the country’s recognition of the importance of ethnic and racial solidarity in their response to it. While the deep-rooted racial discrimination and stigmatization towards certain ethnic groups, especially the Chinese, were catalyzed in some countries by their governments’ COVID-19 rhetoric5 and mainstream media’s racist sentiment,6 New Zealand’s handling of ethnic and racial relations during the pandemic was much better. Following the WHO’s suggestion that the naming of a human infectious disease should not indicate disease-related geographic locations, people’s names, or cultural, population, industry, or occupational references, the New Zealand mainstream media engaged in very little anti-Chinese stigmatization narratives in its reporting. The government’s slogan “Unite Against COVID-19” underlined the importance of solidarity across races and ethnicities from the very beginning of its pandemic response. Also, anti-racist government leadership was advocated (New Zealand Herald, 2020), and a joint force comprising several governmental and civil organizations (including New Zealand Police, Crime Stoppers, NZ Human Rights Commission, and Netsafe.org.nz) has been organized specifically to deal with reports of racial hostility and discrimination during the pandemic. 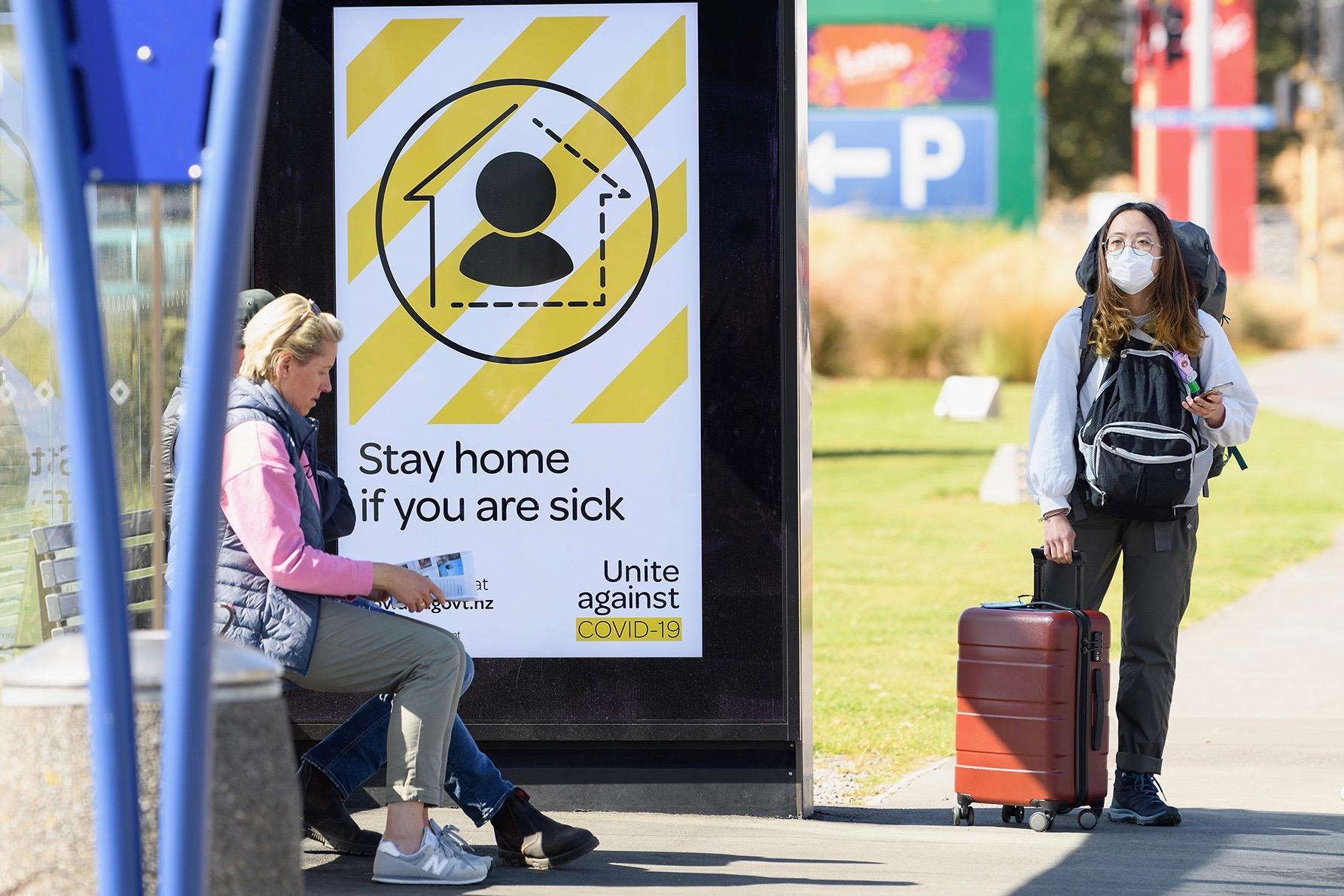 The New Zealand general public has responded well to the government’s measures. Despite the inconveniences to people’s life and work caused by the seven-week nationwide lockdown, the general public was particularly cooperative and followed government instructions to stay at home and take personal precautions. Overall, the country’s Asian community took the pandemic more seriously compared with others, and set a role model for how to behave during the outbreak of a deadly virus.

New Zealand’s successful campaign against the virus are related to the country’s external geopolitical relations and internal rationalization of public health priorities and resources. In general, success in combatting the pandemic in the country largely comes from the government’s apolitical response, transparency, and belief in science. The collective effort made by public health institutions, opposition politicians, and general public also contributed to the success.

In many countries outside of New Zealand, however, this pandemic has fueled blaming and stigmatization of many Asian ethnic communities, especially the Chinese. Stigmatizing discourse capitalizes on blame as a strategy for political gain. New Zealand’s success story demonstrates how important it is to deal with a pandemic with less political intervention, as well as strengthened cross-cultural understanding and racial coordination. In all, is shows how important social solidarity is during a public health crisis without judgement of race, ethnicity, and culture.

1. Out of a total population of 5 million.

2. Besides petitioning the government for comprehensive border closures, the Chinese community appealed tirelessly to the wider public on social media platforms about the importance of wearing masks, and established a shopping and delivery service to provide daily essentials to people who were isolated in their homes.

4. The Minister of Foreign Affairs eventually commented that the China inquiry is “not the priority now” (Small, 2020).

5. For example, US President Donald Trump opened fire at China and put all the blames on a political competitor has blatantly aimed to sidestep his own responsibility.

Bisley, N. (2020). US-China relations were already heated. Then coronavirus threw fuel on the flames. The Conversation. 12 May 2020: https://theconversation.com/us-china-relations-were-already-heated-then-coronavirus-threw-fuel-on-the-flames-137886.

Friedman, U. (2020). New Zealand’s Prime Minister maybe the most effective leader on the planet. 19 April 2020, The Atlantic: https://www.theatlantic.com/politics/archive/2020/04/jacinda-ardern-new-zealand-leadership-coronavirus/610237/