International Education at the Coronavirus Crossroads

International Education at the Coronavirus Crossroads

Heartened by the response to the symposium, we co-edited an anthology on international education at the crossroads,1 that brought together symposium participants as well as other leaders in the field.

Not long after we submitted the manuscript to the press, the COVID-19 pandemic began, shuttering schools and universities in the brick and mortar sense across the globe. In the ensuing weeks, travel restrictions imploded international mobility, research came to a screeching halt, and K-20 school closures affected over 90% of all enrolled learners—more than 1.5 billion students—across the globe.2  Some international students returned home, but not all had the means or desire to do so. Students studying abroad and faculty doing research were called home. Scholar exchange came to a standstill. Embassies and consulates around the world shuttered their doors and cancelled all basic operations. Mobility was and still is in suspended animation.

The scale of displacement and disruption is staggering, the financial ramifications are unfathomable, and the discrimination this has stirred is alarming. Stoked by racist attempts of defining COVID-19 as an Asian virus, xenophobic sentiments are on the rise. Online platforms that intend to bring together faculty, students, and communities across time zones and national boundaries are revealing the digital divides that separate those who have access to technology from those who do not. Girls worldwide have been disproportionately impacted, and concerns about wearing face masks have different implications across racial, cultural, and religious lines.  As a result, tending to the human needs and anxieties of our students, colleagues, and, indeed, ourselves, has become every bit as crucial as our efforts to honor our educational mission.

To say that the pandemic is a blow to international education is a severe understatement. We have been forced to dismantle, piece-by-piece, all the various structures we have carefully developed to sustain our work. We’ve had to re-orient ourselves, our staffs, and all those we serve and with whom we collaborate, to a completely new ethos where we are now implementing policies and practices that go against everything that we believe in. As one should when attempting to produce new knowledge in the face of a global challenge, we reached out to our co-authors and others around the world to make sense of the sustained chaos.3  What follows is an account of some of the insights and reflections they shared, as well as our own reflections.

To begin, Patrick O’Meara warns that the new restrictions on physical mobility, which not only limit our ability to explore the world but prevent us from even leaving our homes, also threaten to usher in a new era of cultural and political isolationism. Safwan Masri reads this tendency as mirroring the crisis of globalization, where the pandemic has revealed fissures in global cooperation and governance and where national isolationism is presiding over global solidarity.

But even though international travel may have ground to a halt, at least for now, international education remains as crucial as ever, and we must not let support for it erode in the current climate. We neglect language study and cultural understanding at our peril. We can look back to the eve of Sputnik, when Russian was taught in less than a dozen of the nation’s 27,000 public and private high schools, and in under 200 colleges and universities across the U.S.4  This was the legacy of interwar political isolationism, which decimated language education across the nation, and which was only temporarily reversed during WWII. Linguistic isolationism left the U.S. vulnerable, for it was oblivious to the rapid scientific and technological developments taking place in the Soviet Union. While Sputnik prompted federal funding for language study alongside that of science and math, the U.S. is still lagging behind in its capacity to prepare its citizens for international engagement.

Yet, it is a testament to just how resilient, and fundamental, international education is that the catastrophic events that have seemed to pose the greatest threat have instead brought about a renewed engagement with the field. In the wake of 9/11, as Kathleen Sideli reminds us, many thought that international education was going to be irreparably damaged. Rather than leading to more isolationism, though, 9/11 demonstrated how global we are, how strong we are as an international community, and how much we can come together when world politics, economics, and now pandemics threaten to pull us apart. Allan Goodman, the president of the Institute of International Education (IIE), observes that the organization has weathered twelve previous pandemics, from the Spanish Flu to SARS and MERS, but that IIE is also hearing that families are intending to send their children to study overseas as soon as travel restrictions are lifted. 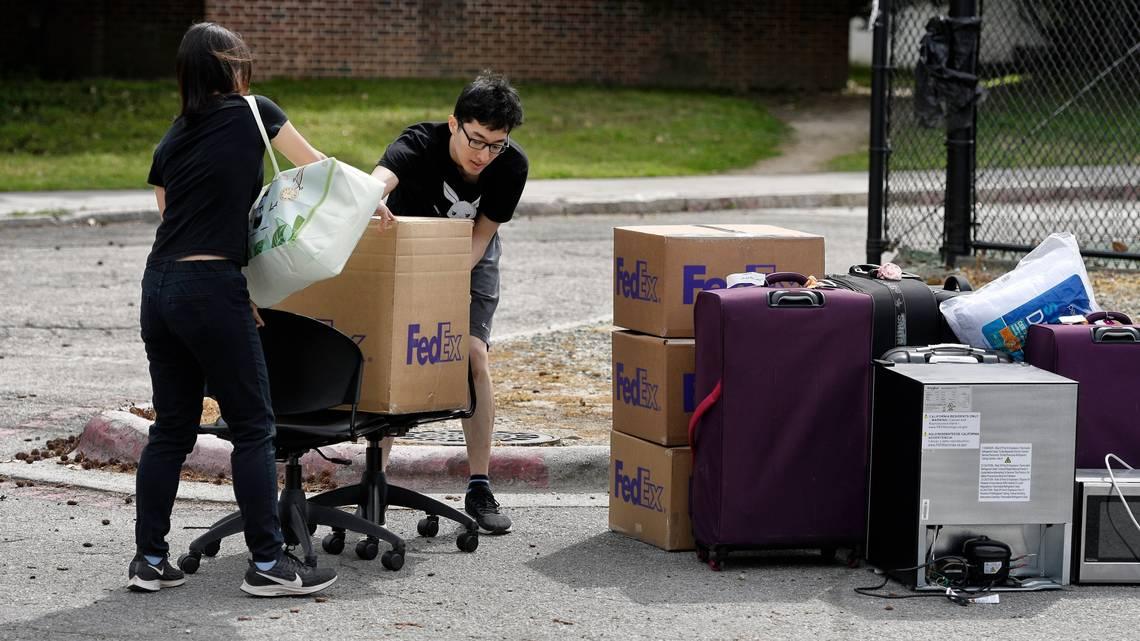 International freshmen students move out of their dorm at Duke University. March 15, 2020.

We must not let this global pandemic alter our resolution to understand the world, break down boundaries, learn languages, create partnerships with institutions and communities, and encourage mobility of people, knowledge, and ideas. Indeed, collaboration and the mobility of ideas and knowledge (if not, for the obvious reason, people) have been crucial to helping us to understand the virus and its path.  As Goodman notes, “In every pandemic, science has saved us.” And, he adds, “Many doing the science today are our international students and scholars.” They are links in the global research networks that have played an integral role in addressing the challenges that we face today.

Moving into the future, international relationships and coalitions will be all the more important. Jonathan Fanton notes that the young people who rise to positions of power will form part of a global network that will have been forged by different factors, including educational exchanges. Their attitudes will have been shaped by their observations of how different nations treat one another during and outside of crises, and this will have long-term implications for international relations.

Educators are also stepping forward to address the multifaceted challenges that the pandemic presents. Eva Egron-Polok observes that “Our education and research institutions are responding around the world—many in collaborative ways—joint, global research effort is underway to find medical treatment and vaccines; universities are providing equipment to hospitals and first and foremost, they are maintaining online provision of learning for the millions of students who cannot leave their homes.” Not all universities, however, have this capacity, which leads Caroline Levander to suggest that institutions that do have the infrastructure should open their doors to those outside of their current student populations. While she recognizes that this “cannot replace the experience of being ‘in the field’ for Fulbrighters,” or cultural immersion through education abroad, “it does open up learning to those from dramatically different backgrounds. Further, it creates the opportunity to diversify our classrooms with the perspectives of those from different parts of the world.” Indeed, Brian Edwards was one of several administrators at Tulane University who rapidly developed a scholarship program to support graduate study for Fulbright student grantees and Peace Corps volunteers who had been recalled from the field—an initiative that other universities have since followed.

We must not let this global pandemic alter our resolution to understand the world, break down boundaries, learn languages, create partnerships with institutions and communities, and encourage mobility of people, knowledge, and ideas.

While COVID-19 has monumentally changed the field of international education, it has also demonstrated very clearly, and in new ways, just how globalized our world is today, how connected we all are, and how knowledge of other places, cultures, and languages is fundamental not just to national defense, but to protecting the health and livelihoods of people in all nations across the globe. As Robin Helms reminds us, “Coronavirus, ironically enough, illustrates exactly why we need internationalization—we need students who understand global phenomena, can see xenophobic and culture-bound reactions for what they are, and are prepared to work with colleagues around the world to address global crises in the short term, and contribute to long-term solutions through research and the advancement of knowledge.”5

Much still remains to be done, of course. We must consider how to better internationalize at home, how to engage faculty, how to more meaningfully and equitably utilize technology, and how to do international education in ways that are more sustainable for the future of the earth.6  We must develop mechanisms that make us less vulnerable to the winds of change. We must devise means of more equitably sharing educational resources. And we must continue to come together to solve global problems, even when world politics, economics, and pandemics threaten to pull us apart.

The landscape of international education has changed even more quickly than any of us in the field could have envisioned, yet here we are at another turning point. We are untethered from the certainty of the future, though it is clear that the global is an imperative now more than ever. We must make sure we understand, question, and adapt to the links that bridge—and divide—communities and the world. And we must embrace our responsibility to produce knowledge collectively, transnationally, and equitably, for future generations and crossroads to come.

6. Kris Olds compiled the following document, which includes useful resources for shifting courses online, as well as information on accessibility, equity, and numerous other topics:  https://docs.google.com/document/d/1DmIts_98MRIdSPiUeMHLlRA6TSjvtRKPpfmj3jR0hIo/edit#

Deborah N. Cohn is Provost Professor, Department of Spanish and Portuguese, and Interim Director of the College Arts and Humanities Institute at Indiana University, Bloomington.