Revise Globalization from a Postgrowth Perspective

Revise Globalization from a Postgrowth Perspective

Over the past three decades, globalization—understood as a mainly neo-liberal project of liberalization and integration of countries into a global trading network—has been viewed as a great opportunity for nations to develop and grow in order to reduce poverty and increase social prosperity.1  The underlying assumption is that economic growth presents the best available solution to overcoming both social and material inequality. Ever since, international organizations such as the World Trade Organization, the World Bank, and the United Nations have been at the forefront in promoting this idea. Even the UN Sustainability Development Goals (SDG’s) are promoting economic growth in ways that are unrealistic and even harmful, according to critics such as Ernst Ulrich von Weizsäcker.2

While the world community still holds to the dogma of infinite and linear economic growth, more and more scholars and activists argue that it is time to give up this credo. Unlimited population expansion and unlimited GDP growth is untenable due to planetary resource constraints, negative environmental impacts, adverse outcomes for social groups, and additional stress on lifestyles and mental health.3  Following Benedikter and Kofler (2019), I would like to propose a revision of the neoliberal concept of globalization from a postgrowth perspective.4

Postgrowth is Real – Or is it?

According to the International Monetary Fund (IMF), global economic output, measured by gross domestic product, rose continuously from 1980 to 2007. While global real GDP grew by 5.6 percent in 2007, the financial and economic crisis of 2008 put an end to this trend. In particular the advanced economies recorded an average economic growth rate of only 0.2 percent, and even still in 2018 the average economic growth rate of these countries was at half of 2007, i.e. 2.2 percent, and down again to 1.7 percent in 2019.5  According to these data, the probability that the advanced industrial nations will again achieve stable pre-crisis growth rates (of around 3-5 percent) is unlikely—even less so after the coronavirus crisis struck in 2020, which according to most predictions is going to shrink global GDP for the year by around three percent.6

Today, postgrowth seems to be no longer just an ideological or normative concept. It has become in many ways our reality, although forced by a catastrophe. After the corona outbreak at the end of 2019, the IMF forecasted that in 2020 advanced economies would expect a negative growth rate of 6.1 percent, and the emerging markets a rate of negative one percent.7  These numbers indicate the urgency for countries characterized by negative or low growth rates to develop new strategies for dealing with this postgrowth reality. Whether this should also be the case for the poorest countries is a question requiring a different response.

The postgrowth perspective argues for abandoning the decade-long credo of growth in terms of a rising GDP, and instead focuses on alternative objectives, where the human ecological footprint must remain below a certain threshold and capital is used without harming the principle of social justice.8  Postgrowth is neither the opposite of growth, nor does it indicate the absence of growth at all: Certain things would still grow, such as the deployment of green technologies and the availability of health care. Furthermore, even whole economies of poorer countries of the Global South might still be growing in order to guarantee a worthy life for their citizens. At the same time, however, some countries, mostly located in the Global North, need to overcome the growth imperative and start seriously thinking about alternative economic systems that limit the human ecological footprint. Furthermore, humanity should continue to develop, but “rather than boosting material consumption, it can grow artistically, culturally, intellectually, and technologically.”9

The postgrowth movement stimulates a discussion about possible alternatives of how to organize economies and how to build a sustainable society.10  Yet in the long run, stimulating the discussion is not enough and some critics contend that the postgrowth movement has raised more questions than answers. They say the concept seems abstract, vague, and to some extent ideological.

In Europe, growth criticism emerged in the 1970s, driven by the publication of “The Limits to Growth” by the Club of Rome.11  After a period of considerable falling off, a second wave of growth criticism evolved as the ‘degrowth’ movement in France during the early 2000s. This was followed by the postgrowth movement which mainly spread in German speaking regions, led most prominently by Niko Paech.12  Meanwhile, the British researcher Kate Raworth designed a new economic model that provides a concrete alternative to the current growth-based model, the so called ‘Doughnut Economics’. Raworth had asked herself: “What if we started economics not with its long-established theories, but with humanity’s long term goals, and then sought out the economic thinking that would enable us to achieve them?”13  She started to draw a picture of the goals and in the end her draft looked like a doughnut. “Below the inner ring – the social foundation – lie critical human deprivations such as hunger and illiteracy. Beyond the outer ring – the ecological ceiling – lies critical planetary degradation such as climate change and biodiversity loss. Between those two rings is the Doughnut itself, the space in which we can meet the needs of all within the means of the planet.”14  The first draft of the doughnut turned out to be a thoughtful economic model, based on new approaches and which enables policy-makers, entrepreneurs, researchers and activists to think and design alternatives, doesn’t matter if it is about business models or an urban development concept. 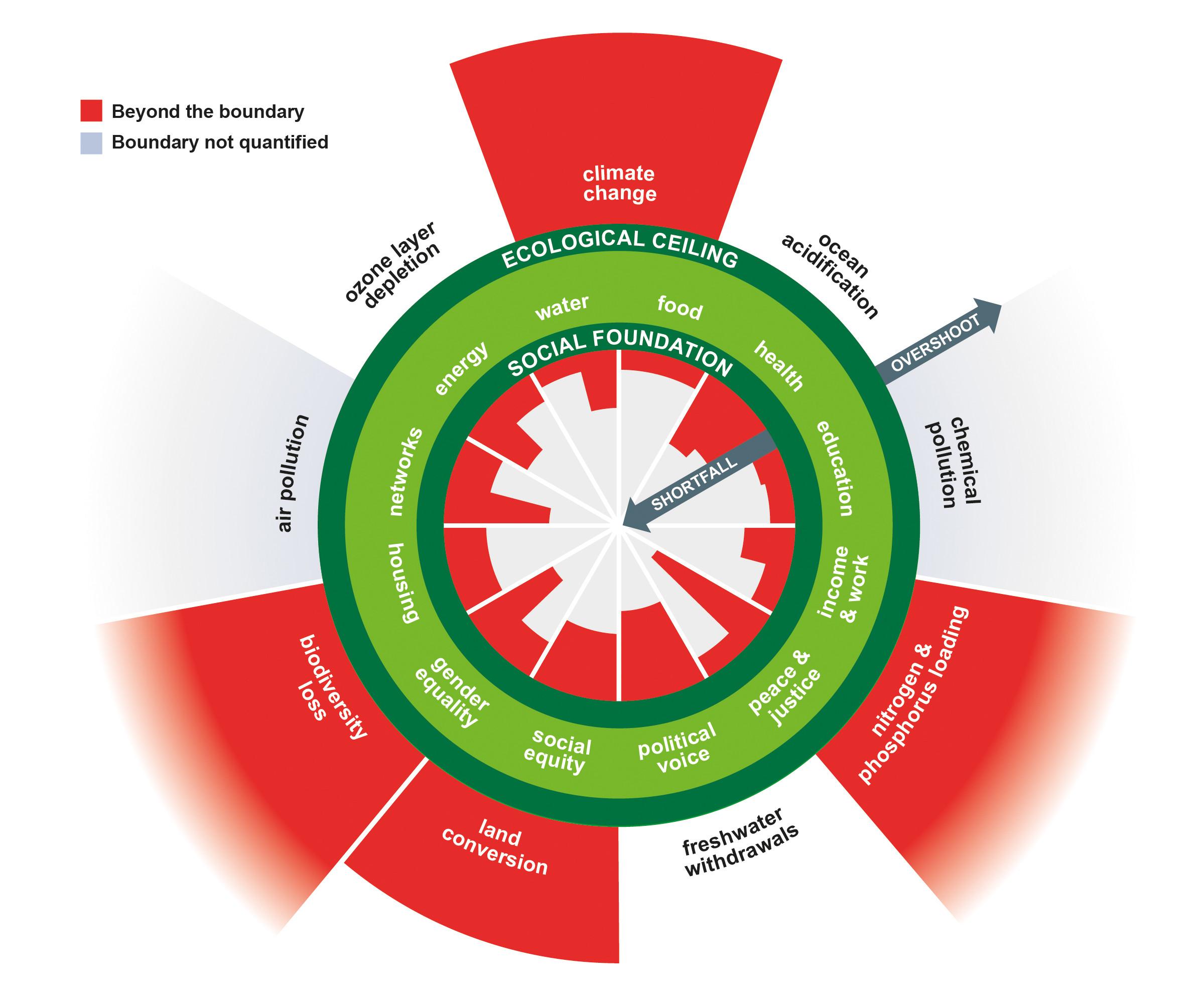 Until now, there are few practical examples of postgrowth. One reason might be that the movement is still quite young. Another reason is the subject matter itself: postgrowth’s demands range from a profound transformation of existing economic and political models, to the creation of totally new systems beyond neoliberal capitalist dogma. Despite all ambiguities, a few practical examples do exist. One is taking shape in Amsterdam. The Dutch capital is about to become the first city in the world to introduce Raworths’ Doughnut Economics model as a means to help overcome the effects of the corona crisis and to officially prioritize the development of a sustainable city concept. This project calls, among other things, for satisfying residents’ housing needs, reducing CO2 emissions by working on the building and food sector, and reducing fishing activities.15 The decision to implement it was made in early April 2020.

Postgrowth is neither the opposite of growth, nor does it indicate the absence of growth at all: Certain things would still grow, such as the deployment of green technologies and the availability of health care.

The challenges of a transformation towards greater environmental sustainability and the ongoing struggle for social justice can also be observed at the international level. For example, the US as well as Europe are discussing a Green New Deal (GND). The GND for Europe is calling for guarantees of decent jobs, rising living standards, climate justice around the world, and an end to the dogma of endless growth.16  Moreover, issues such as “Globalization 4.0” and “a better kind of capitalism” were intensively discussed at the World Economic Forum of 2020.17

Why should globalization be revised?

As mentioned earlier, one possible way to think about re-globalization is to approach it by way of the “five R’s” (Benedikter & Kofler, 2019). The postgrowth movement responds to some of the related challenges in an interesting, although open manner, aiming to reframe current social and economic systems on a local as well as global level, making step by step revisions to globalization from the ground up. It provides powerful tools to facilitate the emergence of new social imaginaries and stimulates a new way of thinking about globalization in the Anthropocene.18  In the end, the big challenge regarding globalization will be to get millions of people thinking “outside the box.” But in order to do so, humanity first needs to become critically conscious of basic thought and action patterns around such concepts as prosperity, democracy, freedom, equality, leisure, happiness, and the human-nature relationship.19

______
*The author thanks Graeme Maxton, full member and past secretary general of the Club of Rome, for his support and critical contribution to this essay.

Daria Habicher is a Researcher at the Center for Advanced Studies, EURAC Research, Bozen-Bolzano, Italy.