As elsewhere, several aspects of globalization helped drive the authoritarian response in the Philippines, a middle-income country with rampant inequality, stagnant development, and social conflict. Over 20% of the population lives in extreme poverty; Manila hosts massive slums and social conditions are even worse in some rural areas. The Philippines’ score on the GINI index shows that it is has one of the most unequal income distributions in the world,1 and as a response to chronic unemployment and declining wages the country exhibits massive overseas labor migration—the Philippines is one of the most remittance dependent countries in the world. Another response to the protracted social crisis has been chronic violence, including high levels of crime and armed rebellions by separatist groups in Mindanao as well as the Communist New Peoples’ Army.

Authoritarianism arose to suppress the violence. Rodrigo Duterte’s administration has militarized law enforcement and mobilized paramilitary gangs in a self-styled “war on drugs,” and pursued abusive counter-insurgency.2  Human rights groups estimate that Duterte’s strategy of extrajudicial assassination of criminal suspects in the slums has claimed tens of thousands of victims—the police acknowledge that thousands have been killed “resisting arrest.”3 More broadly, Duterte has targeted democratic institutions and civil society organizations, and declared war on women, adding new levels of patriarchy to chronic disempowerment.

In a contradictory pattern typical of conflicted semi-liberal countries, the Philippines ranks high in gender equity due to women’s high levels of education, labor force participation, and history of political participation, but women’s status and conditions are undermined by poverty, gender-based violence, often-exploitive overseas migration for domestic service, and lack of reproductive rights.4  Gender-based violence is pervasive, affecting at least one of four Philippine women, while one of every five children has experienced sexual violence.5  Officially a Catholic country, the Philippines bans divorce and abortion, resulting in the region’s highest rate of unplanned and teen pregnancy, and limiting the options of victims of violence and sexual assault.

At the same time, women have played a strong role in liberation and resistance throughout the history of the Philippines. From the periods of Spanish colonialism and Japanese occupation to the more recent era of democratization women have played a prominent role in the political sphere with Corazon Aquino as the first female president and one of the founders of modern Filipino democracy. The most influential and well-known organization, Gabriela, is a coalition of women’s groups that came together to organize against the Marcos dictatorship and to promote women’s rights. Gabriela consists of a registered political party (Gabriela Women’s Party, founded 2000), a non-profit movement umbrella (Gabriela: a National Alliance of Women, founded 1984), and Gabriela Youth (founded 2004), and there are notable organizations within the Gabriela coalition for women workers, migrants, and indigenous women.  As a result of waves of mobilization by this multi-faceted women’s movement, over the past generation the Philippines has responded with a series of laws against sexual harassment, rape, trafficking, and domestic violence.6  The last and most contentious, the Reproductive Health and Responsible Parenthood Bill guaranteeing access to modern contraception, sex education, and obstetric care was first filed in 1998—but was not passed for 13 years due to Catholic Church opposition. Even after the 2012 success of tireless women’s movement advocacy, the Philippines’ Supreme Court was able to halt implementation for five more years, highly influenced and lobbied by the Catholic Bishops Conference (in a harbinger of authoritarianism). Ironically, it was Duterte who signed an Executive Order mandating the implementation of the Reproductive Health Bill upon his election—even as he was turning against women’s rights—due to concerns about the Philippines’ population crisis and rivalry with the Church on other issues including their defense of human rights. (Dañguilan 2018). Moreover, there is still a refusal to comply with the law at an individual level, at schools, and in local administrations.

Overall, Duterte has fostered a new wave of misogyny, persecution of women’s groups, and violations of women’s rights. From the beginning of his campaign, he made misogynist jokes about sexually assaulting women. Since his election, he has moved from passing comments to encouraging rape and excusing war crimes. In a speech to former communist soldiers in Malacañang about counter-insurgency tactics against female guerrillas, Duterte said "There’s a new order coming from the mayor, ‘We will not kill you. We will just shoot you in the vagina.”7  In another address to the military, Duterte said he would take responsibility for soldiers raping three women during the siege of Marawi City: “If you had raped three, I will admit it, that’s on me.”8

Gender-based violence is pervasive, affecting at least one of four Philippine women, while one of every five children has experienced sexual violence.

Along with general persecution of journalists and political opponents, Duterte has shown a special propensity to persecute female political leaders accompanied by violent sexual imagery. He has imprisoned prominent critic Senator Leila de Lima on trumped up charges (that have been internationally condemned). The Duterte Administration has also pursued crusading online journalist and Rappler founder Maria Ressa with “cyber-libel” arrest and death threats.9

Duterte’s administration has attacked traditional allies of the women’s movement—like indigenous groups and leftist groups—with arrest, assassination, and “red-tagging,” which labels opponents officially designated as “subversive” for attacks by murky paramilitary forces with ties to authorities.10  Indigenous women have been specifically targeted for sexual violence in conflict zones, and little has been done by the authorities to respond to complaints. Members of the Lumad (a tribal group from Mindanao) have been driven from their ancestral homes and rape has been used as a weapon to scare away returning families.11

In a more direct assault on women’s organizations, Duterte has labeled women’s groups as “gaga” (meaning, stupid women), and takes every opportunity to belittle the efforts of political women. Women’s organizations as a whole continue to face long-term problems of funding and cooperation at the Barangay (local government) level and implementation lags for funds and programs designated by the model legislation that was secured by a generation of struggle.12  Both the political and civil society organizations of Gabriela are under heavy surveillance. Volunteers and staff have been followed, received text threats including rape and murder, and if they go on radio programs, bomb threats will be called in. The chapters outside of Manila are experiencing even more persecution and violence than the headquarters. Gabriela cannot gather or hold formal meetings in Mindanao due to martial law. There are Gabriela members in jail on trumped up charges, including illegal possession of firearms and arson, and many have been arrested under warrants with false or blank names.  Members have even been kidnapped by the armed forces. The current general secretary, Ms. Joms Salvador, is facing perjury charges while the vice chair is also facing charges. The government discriminates against Gabriela for access to resources and funds, and the organization is under investigation by the securities and exchange commission.13 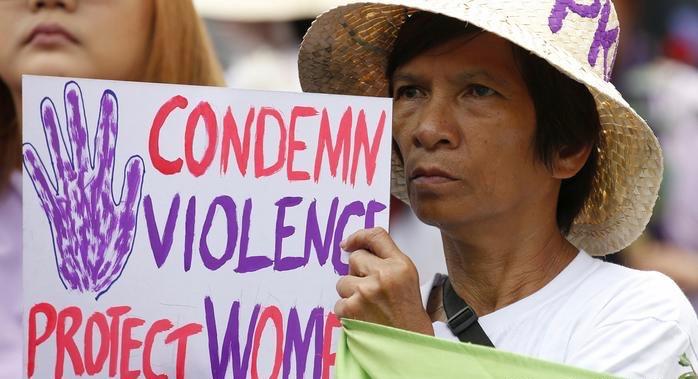 The Philippines fits the common pattern among our project’s cases of negative international modeling with respect to repression carried out under its militarization of the War on Drugs and long-standing military collaboration with the United States. However, the Philippines has also rejected international efforts at aid conditionality and human rights criticism in the United Nations, with Duterte rejecting aid from the countries who signed a U.N. Resolution—against the advice of his own generals.14  Another difference from authoritarianisms elsewhere is the contradictory role of religion: Since Catholicism is not mobilized by the nationalist leader, it operates to defend some rights even as it opposes others.

The experience of the Philippines shows that authoritarian regimes can undermine even decades of progress supported by strong women’s movements, because in a negative as well as positive sense, “women’s rights are human rights.” The toxic combination of nationalism, patriarchy, and securitization leads to a direct war on women and rights defenders—and it also disables social progress, the rule of law, and the state’s capacity to provide a foundation for all rights. As the people of Brazil, Russia, and Turkey (among others) have learned, nationalist strongmen ultimately cannot protect their societies from the crises of globalization, because they fail to address the fundamental structural problems that lead to inequality, crime, and chronic violence against half the population.

4. Brysk, Alison. The Struggle for Freedom From Fear: Contesting Gender Violence at the Frontiers of Globalization. Oxford University Press, 2018.

5. Among them were the Anti-Sexual Harassment Act of 1995, 1995 Migrant Workers and Overseas Filipinos Act, the Anti-Rape Act of 1997, the Rape Victims Assistance Act, An Act Declaring Unlawful the Matching of Filipino Mail Order Brides to Foreigners, the Anti-Trafficking in Persons Act of 2003, the Anti-Violence Against Women and Their Children Act of 2004, and a 2010 Magna Carta of Overseas Migrant Workers.

Alison Brysk is Mellichamp Professor of Global Governance and Human Rights in the Department of Global Studies at UC Santa Barbara.

Jesilyn Faust is a PhD candidate in the Department of Global Studies at UC Santa Barbara.