In light of the current pandemic, it is important to reflect on the significance of this historical conjuncture and on its relationship to the past and future of globalization. In order to do so, Benedikter and Kofler advance the concept of “re-globalization,” which invariably raises the issue of periodization as well as the criteria used to measure the “before” and the “after.” This unprecedented global crisis, which in the eyes of many observers has “changed everything,” therefore invites us to look at the situation both socially and epistemologically.

Capitalism is essentially universal because it is based on the abstract exchange of commodities and implies a commodification of all social and human relations. At least since the 1990s, globalization has become part of our everyday life as a result of the neoliberal revolution. Most people have accepted it because, in their opinion, there was/is no alternative (TINA). Globalization has imposed itself on them. They are the objects of globalization. Accordingly, individuals have had very real experiences of the abstract phenomenon of globalization, giving them a sense of it and meanings to attach to it.

It is well known that the globalized world is not the same for everyone. There are not only the “winners” and “losers” of globalization, but also differences between the global and the local levels of individuals’ lifeworlds. A complex network of global governance institutions, which operate far away from the daily lives of common people, tries to regulate and steer globalization. These governance institutions have no democratic legitimation but rather a functional one.1  Nevertheless, the decisions taken at this higher level have a direct impact on people’s everyday lives, as individuals are the objects of the governance procedures regulating neoliberal globalization.

On the local and the individual level, globalization not only means a certain degree of freedom from traditional and local constrains, but also implies the (self-)mobilization of globalized capital. This newly gained freedom creates fears and “escapes from freedom”2 that tend to lead to the functional and individual integration of individuals in society: i.e., to serial individualism.3  This is the predominant way to “find one’s place” (Simmel) in globalized society. While not everyone can find their place—these are the losers of globalization—even the winners have not chosen this existence freely. They agreed to it because, in their imagination, there was “no alternative” (Thatcher) to this life imposed on them. People feel powerless and for this reason they follow (often charismatic) leaders and, above all, social institutions. They want to do whatever is necessary in order to comply with the norms of society. Yet, in a crisis situation individuals cannot do what they feel they should be doing or what they want to do.

Crisis is the usual term to describe experiences in people’s lifeworld: experiences of the decline of an old world combined with the fear of the present and of the future. They are foremost individualized experiences: people are individual objects of a crisis, which is outside of them but, at the same time, imposes on them a new situation, new rules and standards. For example, if the car industry has problems, this becomes my problem should I lose my job. I must deal with it the best way I can. Crisis experiences show that we cannot overcome a problem because we are too weak. Although the crisis exists outside of us, it dominates our lives.

Crises have been a real everyday experience for many years now. These experiences are part of a larger “erosion crisis”: the erosion of the established world sliding into the unknown. Nothing is certain, reliable, or predictable anymore, as if we were standing on a sand dune that is slipping away under our feet. Certainly, our feet are on the ground, but the sand is moving; no one knows the reason, the direction, the extent or the duration of the shift. In such a situation of uncertainty and helplessness, resignation and fatalism tend to prevent us from taking responsibility for ourselves, and efforts to merely adapt to the new circumstances are widespread.

Crises have been a real everyday experience for many years now. These experiences are part of a larger “erosion crisis”: the erosion of the established world sliding into the unknown.

However, the erosion crisis is a way to reproduce globalized capitalism because it demands the (self-)mobilization of the subject to deal individually with this situation in order to find their place in society. Furthermore, it also contributes to the fear of globalization and experiences of powerlessness that can lead to populism: an “escape from freedom” into submission to a leader, a nation, a set of traditions. Since the underlying causes of the crisis are never resolved and so-called “crisis solutions” are only a patchwork of symptom treatments, the sense of threats, fears and dangers persists.

Although there are many public critics, strikes, and movements all over the world that mobilize and take action for the vision of a better world, at present there is no real alternative social project. For this reason, the erosion crisis goes on.4

This leads us to the present. In the recent past various crises (ecological, economic, political) have been experienced, but it is a pandemic that has now pushed the globalized world into an enormous crisis of which we do not know when and how it will end. On the one hand, the corona pandemic is linked to ecological, economic, and political aspects of globalization which have generated a lot of very often well-founded fears. On the other hand, it seems to be a sort of “natural” punishment for the offences of our globalized life against nature. Fear is everywhere, but it is not a new “big fear” (la grande peur) like in 1789, which was caused by more or less unfounded rumors that drove people to overthrow the Ancien Régime. The opposite is the case today: there is a lot of death, civil rights are suspended, we experience a human and political disaster, but there is little real opposition. There are hardly any fundamental critiques of the causes of the pandemic or of those responsible for this disaster. The public critique is very limited and the old criticism of the growth model and of economic and political globalization seem to be anachronistic. Once again, there is “no alternative” in the sense of a sketch of another globalization, as was the case in the last (neoliberal) globalization phase.

Reframing: Towards an Authoritarian Deglobalization?

In the context of the corona crisis, we do not yet have reliable empirical data concerning people’s opinions, world views, the future they want. Nonetheless, polls and opinion research show a worrying situation in Europe. Most of the French population feels mistrust, gloom, weariness and fear (Le Monde, 19-20.04.2020).5  At the same time, the French no longer trust politicians (65%), who are expected to wage "the war against the virus" (Macron) as representatives of the people. In Germany and Great Britain, the opposite is the case. Brice Teinturier, the director of a large polling institute, says that the "nothing more to screw up attitude... carries deeper anger and suffering. It is no longer a slow and almost underground process of detachment but a disgust which generates a desire for rupture, which can materialize through revolt or multiple forms of withdrawal, among the most radical.”6 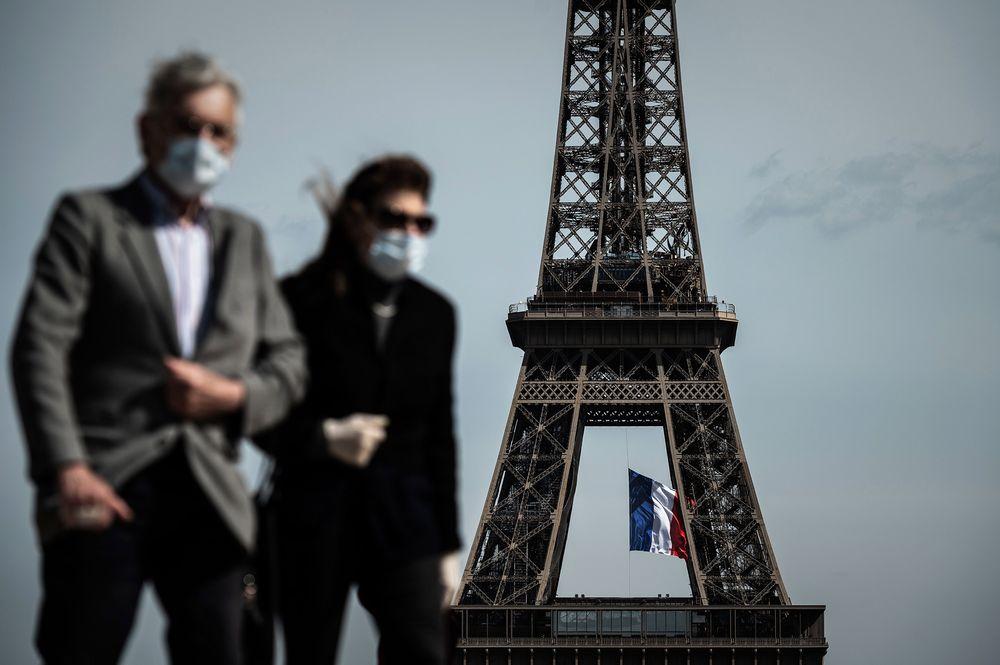 Pedestrians walk past the Eiffel Tower in Paris on May 11. (Photo credit: AFP via Getty Images)

Social conflicts have become more radical in recent years. Violence is pervasive and has become "normalized." The potential for revolt is great but ambiguous, as there is no massive break with the established order. A CSA investigation (2014)7 clearly shows in France an attachment to social gains and, at the same time, the desire for profound change: 84% think that "France must be radically transformed or reformed in depth," and change (87%), reform (75%), and revolution (57%) are words with mostly positive associations. A quarter (26%) say they would leave the country if they had a choice, but their attachment to "the country as it is" seems too deep.

The verdict on globalization? Sixty-five percent of French respondents think that the country should protect itself more from the outside world in the future. A large majority (67%) thinks there are "too many foreigners" in the country. Following the coronavirus crisis, almost two-thirds of French people (like the Germans and the British) think that immigration and borders must be better controlled.

The potential for revolt is great but ambiguous, as there is no massive break with the established order.

Is the future of democracy its transformation into an authoritarian regime? The coronavirus crisis reinforces this call for authority not only in France, where 88% want "a real boss" and 18% would prefer an authoritarian system with a leader who decides without being embarrassed by parliament, opponents, unions, or other opponents. In the context of the coronavirus crisis, the fragility of democracy is clearly shown by the fact that 44% of French people prefer "effective policy" to democracy, which is considered as ineffective. This position is less widespread in Germany and Great Britain.

Globalization as it exists was born out of crises and has been reproduced by erosion crises. A desire for change is nourished by suffering and the experience that the globalized world is not what it claims to be. But what should change look like? Feelings of powerlessness in the face of globalization often provoke nationalistic, identity-based, and anti-democratic impulses which are still much more prevalent among populations than in official politics. Voices calling for another globalization are rare and not very audible. Like other crises before it, the COVID-19 crisis also shows the limits of globalized societies. This does not mean its collapse, but there is still no alternative project to existing globalization. This is why Jean-Yves Le Diran, the French Minister for Foreign Affairs concludes, “my fear is that the world after looks like the world before, but worse.”8

Jan Spurk is Professor of Sociology at Paris Descartes University.