The New Authoritarianism in Turkey: Prospects Beyond the Democracy Façade

The New Authoritarianism in Turkey: Prospects Beyond the Democracy Façade

Democracy is a streetcar that we take to reach
our destination, then we hop off.
R.T. Erdogan, Milliyet, July 14, 1996

During the first decade of the new millennium, there was a widespread belief that Turkey was on its way to become a democratic, human rights-respecting country. Increasing public awareness and vigilance about human rights and successive governments’ willingness to accommodate them, at least in order to meet the European Union’s membership criteria, signaled a promising future. Although some doubts about the level of commitment and the effective implementation of reforms remained,1 high hopes about the direction of change were shared by a majority of Turkey’s citizens, as well as by international observers.

Today, the country is frequently referred to as a personal dictatorship, a 21st century-sultanate, or a hybrid regime at best.2  Academics and journalists have been under siege, and their dismissal and prosecution, as well as those of many state employees, became a routine practice under the state of emergency declared after the aborted coup of July 2016. Travel restrictions, the government takeover of the media and business outlets, seizure of elected local governments, and other forms of repression against all “suspected” opposition reached an all-time high. Referring to the treatment of journalists as a “witch hunt waged by President Recep Tayyip Erdogan’s government against its media critics,” Reporters Without Borders assigned Turkey the rank of 157 out of 180 countries on its 2018 World Freedom of Press Index.3  Meanwhile violence against women is on the rise, and the government is engaged in a process of reversing egalitarian policies adopted during the previous reform periods.4  The equality in dignity demands of LGBT+ groups have been not only ignored but also repressed through various mechanisms.5  International human rights organizations have documented a range of human rights violations, as well as frequent arrests and imprisonment of many, including human rights advocates, on yet to be documented charges of terrorism and treason.6  According to the President of Turkey’s Court of Cassation as of November 2017, eight percent of the country’s population was under investigation.7  The independence of the judiciary is severely compromised and the law has become a government weapon against its political opponents and other critics.

How did the rule of law, democratic institutions and mechanisms, and human rights conditions in Turkey deteriorate so rapidly? Briefly, the erosion started much earlier, in 2007, with the prosecution of the military—using fabricated evidence—although the overtly repressive policies targeting all opposition groups emerged after the 2011 elections, escalated following the 2013 Gezi Park demonstrations, and grew deeper after the Gülenist coup attempt in July 2016. Moreover, Erdogan did not achieve unprecedented executive authority and control over the entire state apparatus single-handedly. While he might have been successful in hiding his authoritarian plans, even from his own comrades, the rise and consolidation of his party’s rule were enabled by many: e.g., Turkish liberals and leftists, Kurdish leaders, the United States, the European Union, and the Western press. Moreover, the conduct of his Justice and Development Party (AKP) does not constitute a major deviation from the practice of politics in Turkey, where democratic aspiration has been strong but commitment weak—both among the political elite and the public—as democratic principles and institutions were frequently sacrificed to other goals.

The Uses of Democracy Façade

A major political tactic of the AKP has been playing the innocent victim of the secularist policies pursued since the early 1920s. Despite being in power for nearly two decades, Erdogan continues to use this “victim card” to deflate criticisms and accountability and to mobilize public support. Now, in addition to the internal threats that are all labeled “terrorists”—the secularists, Gülenists, Kurds, and leftists—he also claims that some foreign entities are behind all opposition aiming to weaken Turkey and topple the AKP government. Any criticism directed at him is treated as a part of this conspiracy and interpreted as a threat to the state and the country. “L’état, c’est moi” might have been coined by Louis XIV but is effectively personified by Erdogan.

A major political tactic of the AKP has been playing the innocent victim of the secularist policies pursued since the early 1920s.

Nevertheless, public support is important to Erdogan. His successive landslide electoral victories in the past led him to promote “majoritarianism” and claim “public mandate” to justify his policies. His mastery of the voting process and ability to manipulate elections have encouraged him to call for elections and referendums, providing a convenient façade of democracy. Thus, opposition groups and parties are allowed to exist, but he uses the judiciary as a weapon to suppress them. While he closed down most of the opposition media on charges of terrorism and is capable of doing so for the rest, he allows the operation of a few opposition outlets in order to maintain this façade of democracy. Yet, they are not left completely free, and their editors and journalists are intermittently subjected to attacks and prosecution.

His desire to legitimize his de facto one-man rule—clearly manifested since he became the President of the country in 2014—by holding a constitutional referendum in 2017, was another attempt to maintain this democracy façade. He can claim that he is not an autocratic Sultan but an elected leader of a democratic state who is exercising his constitutional power. This façade also helps the EU, the U.S., and other allies save face in their dealings with Turkey.

Prospects for Dismantling the Façade

This appeal to democracy through pretense, however, provides the opposition with some space to mobilize the public and challenge Erdogan’s authority. But, in order to be effective, the opposition—both the public and political parties—has to establish a united front that focuses on a common goal, instead of pointing out each other’s weaknesses. The challenge is to acknowledge one’s own past mistakes and work with others who might have committed errors and wrongs in the past, without condemning them. It is not the best time for the already small opposition media and left-wing intellectuals to hold the current Republican People’s Party (CHP) accountable for the anti-religious and anti-Kurdish repressions carried out during the CHP’s one-party rule in the 1920s and 1930s, since such criticisms only help Erdogan, who takes every opportunity to validate his claims of victimhood (as a Muslim repressed under staunch secularism) and to stir conflict among potential opposition allies (Kurdish politicians and the CHP). 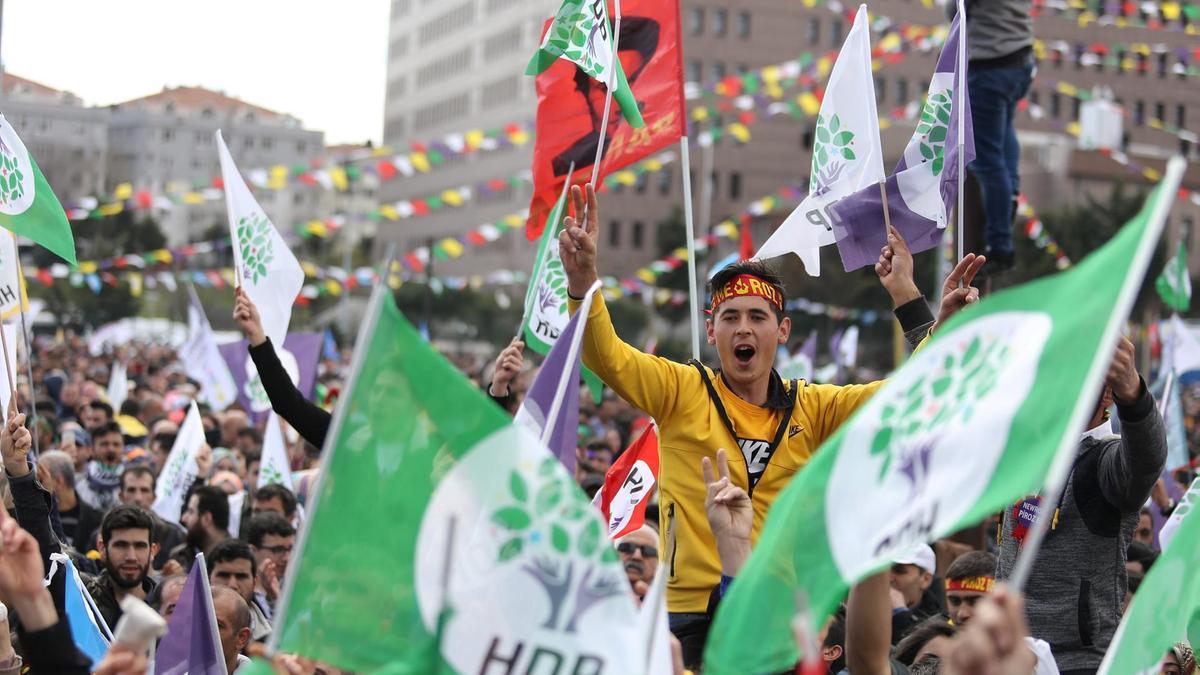 As the Nationalist Movement Party (MHP) appears to be blended into the AKP in a Turkish nationalist alliance (though it may be using the alliance to revive its base), the CHP and the HDP (People’s Democratic Party)—as well as the MHP-splinter Iyi Parti—can reevaluate their strategies and focus on the goal of restoring democratic mechanisms and the rule of law, which they all need. This requires the CHP to overcome its nationalist impulse and speak to the needs of impoverished and silenced masses. As the main opposition party, it should use its power and voice to publicize and denounce the rise of authoritarianism and repression in the country, instead of sticking to some nationalist pride and deflating foreign observers’ criticism of the current regime.8  Most important, it should refrain from supporting the AKP’s militarism, as it did last year by endorsing the government bill that allowed Turkey’s invasion of Syrian provinces to curb the activities of Kurdish nationalists.

Similarly, the pro-Kurdish HDP, which is viewed by many liberals and leftists as more than an ethnic party and as the best hope for democracy in Turkey, should recognize that the votes who made it the third largest party come from a broader constituency and learn to speak to broader interests. In fact, regardless of rhetoric at the leadership level, the constituencies of these two parties have been cognizant of the importance of strengthening each other. Many CHP followers voted for the HDP in the 2015 and 2018 parliamentary elections to ensure that the HDP passed the ten percent threshold and entered the parliament. Similarly, some HDP voters supported the CHP’s candidate at the latest presidential elections, despite the fact that the HDP had its own candidate. In 2019, the HDP leadership threw its support behind CHP mayoral candidates in major cities in order to increase their chances against the AKP-MHP alliance.

Opposition groups and parties are allowed to exist, but [Erdogan] uses the judiciary as a weapon to suppress them.

The HDP should also refrain from directly or indirectly supporting Erdogan’s agenda. This requires taking a clear position against violence and focusing on relevant issues in seeking alliances, since Erdogan has been adept at pursuing a divide and rule strategy, in addition to provoking polarization.

Perhaps the bigger onus on this matter falls on the CHP. If it is serious about restoring democracy and being a contender for power, it cannot continue to allow the AKP to be the only party that offers a solution to the Kurdish question; it has to present itself as the hope for a non-military solution. The party leadership has to put the grievances of Kurds on its agenda, emphatically acknowledge the legitimacy of the HDP, and seek an open dialogue with it, as it did in 2015, instead of trying to appeal to the Turkish nationalist and religious constituencies that make up the AKP and MHP base. That base is likely to be captured by the new right-wing parties, established or envisioned by some former AKP big-shots who had been discarded or estranged by Erdogan.

The exigent task for the current opposition parties is therefore to overcome identity politics, which was inflamed by the military rulers in the 1980s to repress class-politics and was then grabbed by the AKP to revive the Turkish-Nationalist-Islamist identity as a mobilizing force. Turkey needs committed democrats who respect and protect the rights of all without discrimination, and democrats need to work together for democracy, which cannot be reduced to elections and majoritarianism.

_______
[*] This essay is a condensed version of a full-length article that will we forthcoming in Zeitschrift für Menschenrechte in 2020.

5. Since 2010, the AKP officials and affiliates have been referring to homosexuality an illness to be eradicated to save the children and families, and the pride parades have been banned since 2014. See Meltem Ince Yenilmez. 2017. “Socio-political Attitude Towards Lesbians in Turkey.” Sexuality & Culture 21:1 (March), 287–299; Zehra F. K. Arat and Caryl Nuñez. 2017. “The Limits of Tolerance and LGBT Rights and in Turkey” Human Rights Review 18:1 (March), 1-19; and https://www.dw.com/en/istanbul-police-use-tear-gas-to-disperse-gay-pride... 49421078

7. https://t24.com.tr/haber/yargitay-baskani-cirit-80-milyonluk-ulkemizde-6.... He shares this data to reinforce the notion that the country is facing major threats.

8. For example, in January 2019, the CHP representatives at the Parliamentary Assembly of the Council of Europe voted against a resolution that called for removing a range of serious restrictions on the opposition in Turkey, simply because the resolution also included an item calling for the implementation of the recommendations of the European Committee for the Prevention of Torture and Inhuman or Degrading Treatment or Punishment with regard to the Kurdish leader Abdullah Ocalan. See, the PACE news and resolution at http://assembly.coe.int/nw/xml/News/News-View-EN.asp?newsid=7352&lang=2&..., and the CHP’s defense of its vote at https://odatv.com/uyeleri-hapiste-olan-chp-hayir-oyu-verdi-25011914.html.

Zehra F. Kabasakal Arat is Professor of Political Science at the University of Connecticut.