Back in the 1950s, as a child growing up in the middle of New York City, I attended Saturday afternoon movies about interplanetary war. Typically, in those easily forgotten films, Soviet and American soldiers would end up fighting on the same side against a common enemy, even during the furiously adversarial Cold War.1  Though hardly an ideological premise of either superpower,2 Washington and Moscow recognized the primacy of undertaking cooperation against an overriding global menace.

We ought never rely upon wholly contrived or fictive scenarios of alien invasion to buttress human survival. Nonetheless, potentially at least, a plausible catalyst has now presented itself. This unwanted and unwitting benefactor is worldwide pandemic, a fearsome pathogen-based threat that confronts humankind in toto, without any regard for national, racial, ethnic, religious, or ideological differences. This point was made very recently by UN Secretary General Antonio Guterres, who called on March 24 2020 for “an immediate global ceasefire in all corners of the world.” In a video speech, Guterres continued: “The virus does not care about ethnicity or nationality, faction or faith. It attacks all, relentlessly.” With these cogent thoughts in mind, the coronavirus pandemic could effectively become a real-world alternative to cinematic alien invasion—that is, a genuinely purposeful and pragmatic source of long sought human unity.

Credo quia absurdum, said the ancient philosophers. “I believe because it is absurd.” However counterintuitive, the incontestable commonality of the corona disease threat could underscore and animate the creation of a genuinely cooperative world politics. Significantly, it’s not as silly or fanciful as it may first sound. Disease pandemics are prospectively universal, and can provide impetus not only for mitigating a particular pathology, but also for institutionalizing wider patterns of global cooperation.

Ultimately, if we humans are going to survive as a species, truth must win out decisively over political wizardry and wishful thinking. It is profoundly and unforgivably foolish to suppose that any nation on earth should expect meaningful progress at the deliberately sacrificial expense of other nations. As a determined response to serious challenges, from pandemic control to nuclear war avoidance, competitive nationalism is sorely misconceived. If left unchallenged, this atavistic mantra will only further harden the hearts of states’ enemies, thereby exacerbating the essential search for viable human community. What a pandemic implies is the need to broaden support for more enduring impulses of global solidarity and human interconnectedness.

From the seventeenth-century Peace of Westphalia (1648), international relations have been shaped by a protean “balance of power” and by certain evident corollaries of war, terror, and genocide.3  To be sure, hope for a deepened commitment to global cooperation still exists, but for now it must sing softly, with circumspection. Although seemingly counter-intuitive, the time for visceral celebrations of nationalism, military technology, even social media, is at least partially over. Now, in order to survive on an imperiled planet, all of us, together, must seek to rediscover the value of each individual life, to think in terms of lives that are consciously detached from nationally pre-patterned kinds of conformance and from all disingenuously contrived visages of imagined tribal happiness. On this basis, it becomes possible to recognize that shared human tears may reveal much deeper existential meanings and opportunities than any purported “balance of power.”4  This is most markedly true today with regard to those tangible tears associated with the coronavirus spread and a global future in which pandemics are expected to become far more commonplace.

What a pandemic implies is the need to broaden support for more enduring impulses of global solidarity and human interconnectedness.

In his landmark work, The Decline of the West, first published during World War I, Oswald Spengler inquired: “Can a desperate faith in knowledge free us from the nightmare of the grand questions?” It remains a noteworthy query, one that will likely never be seriously raised in our universities, let alone on Wall Street or in the Trump White House. We may, however, still learn something about these “grand questions” by studying American responsibility for the expanding chaos in world politics. At that time, moreover, we might finally learn that the most suffocating insecurities of life on earth can never be undone by militarizing global economics, by building larger missiles, by abrogating international treaties, or by replacing one abundantly sordid regime with another in presumptively “realistic” interests of “national security.”5

In the end, truth is exculpatory. It is a uniquely promising paradox that narrowly nationalist policies express a continuous lie that can help us see the truth. This particular truth, cosmopolitan in outlook, is that every nation must become abundantly conscious of unity and relatedness: between all human beings, between all nation-states, and also, between humans and all non-human forms of life. The common enemy of a worldwide disease pandemic could become an appropriate beginning for such a new global consciousness.

Although still generally unrecognized, such lucidity must become integral to plausible prospects for national security and human well-being. Now, before it is too late, is prospectively the last best time to replace the “passionate intensity” of belligerent tribal competitions with a greatly improved sort of “conviction,” a crisis-informed understanding that would denounce “everyone for himself” strategizing in world politics and allow this human-endangering philosophy to recede into a well-deserved oblivion.

The common enemy of a worldwide disease pandemic could become an appropriate beginning for a new global consciousness.

Could the desperately needed transition from “realist” world politics to more genuinely collaborative international interactions actually take place?6  The odds seem low, of course, but they are also not meaningfully calculable.7  The current situation of worldwide pandemic as opportunity is sui generis and difficult to accept. Yet, it rightfully brings to mind the wise and reinforcing observation of Italian filmmaker Federico Fellini: “The visionary is the only realist.”

Ironic observations need not in any way be disqualifying. Though it would seem inconceivable that any serious human benefits could be extracted from a virulent and unpredictable pandemic, there remain certain latent opportunities to discover planetary gain in a common disease adversary. 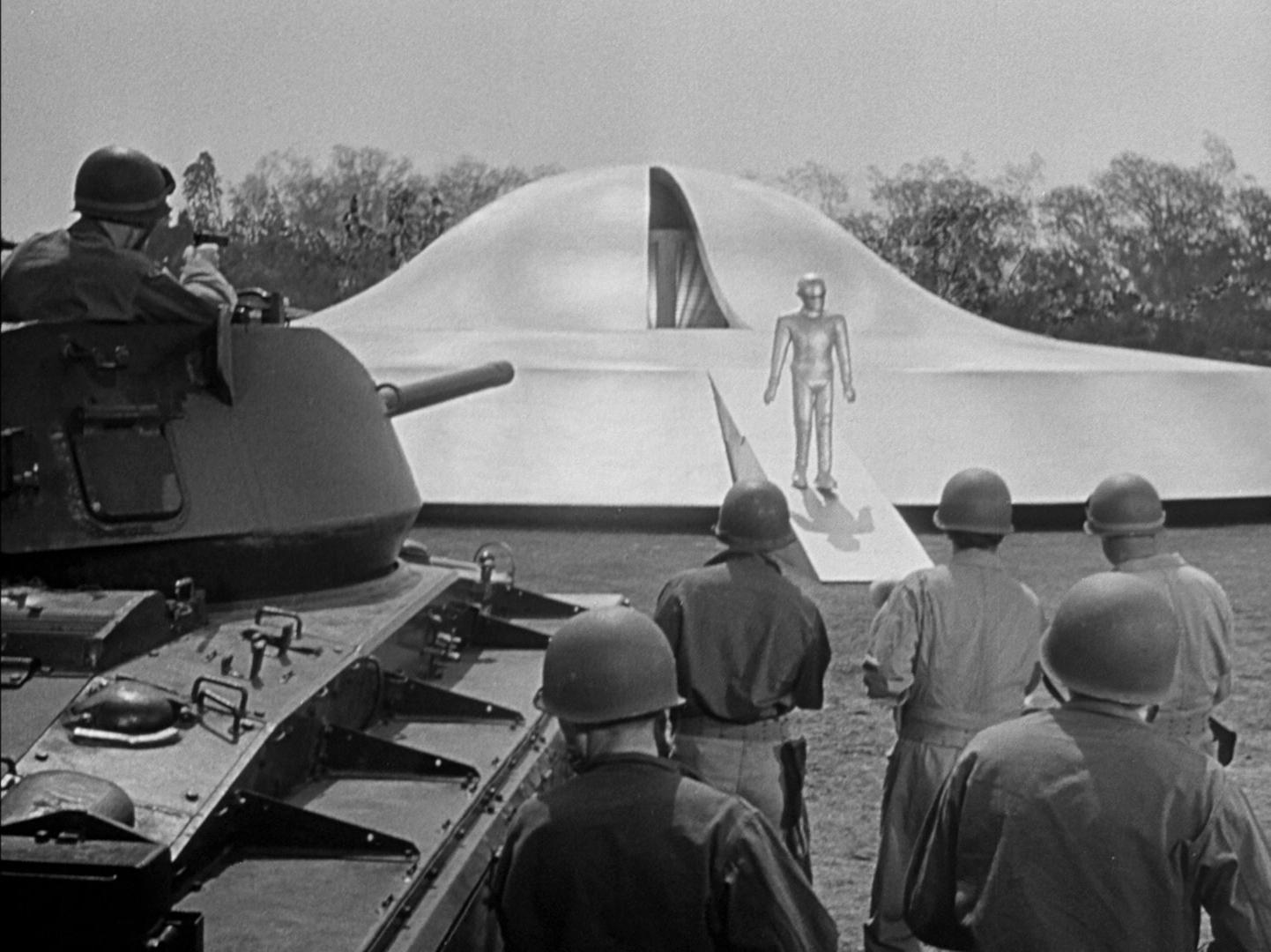 from the 1951 film 'The Day the Earth Stood Still', directed by Robert Wise.

In essence, because we could hardly seek to discover such a convenient foe in extra-planetary aggressions—a Martian invasion will not save us—national governments throughout the world should identify channels of extended cooperation against coronavirus as a propitious first-step toward wider forms of global collaboration. Here, in what political scientists and other scholars used to call “functionalism,” there could take place a dignifying “spillover” of cooperative world politics from one very specific medical problem toward much wider affirmations of biological and social “oneness.”8

Nothing could possibly be more sensible, or urgently important. To be sure, there is nothing conceivably positive about any virulent disease pandemic, but the current coronavirus spread could still harbor certain latent benefits for “world order” reform.9  In this setting, we may usefully recall filmmaker Federico Fellini: “The visionary is the only realist.”

5. In this connection, an always attendant or corollary risk has to do with irrational decision-making in world politics. This may range from computational errors in calculation to, random or haphazard influences in the making or transmittal of particular decisions, to and the internal dissonances generated within structures of collective decision-making.

6. The sixteenth-century Florentine philosopher, Niccolo Machiavelli, joined Aristotle's foundations for a scientific study of politics with assumptions of realpolitik to reach certain pragmatic conclusions about politics.  His most important conclusion underscores the dilemma of practicing goodness in an essentially evil world:  "A man who wishes to make a profession of goodness in everything must necessarily come to grief among so many who are not good." (See The Prince, Chapter XV).

7. In science and mathematics, true probabilities must always be based upon the discernible frequency of pertinent past events.

9. The term world order reform has its contemporary origins in a scholarly movement begun at the Yale Law School in the mid- and late 1960s, and “adopted” at the Politics Department at Princeton University in 1967-68. The present author was an early member of the Princeton-based World Order Models Project, and wrote several early books in this once-promising scholarly genre.