Globally, students are considered the moral center for social transformation. We can see this in the student movements in the 1960s and in the Black Lives Matter protests today. What is significant about the recent student movements in India? In trying to answer this question, we should recount that for the first time in India’s history, the police recently entered a university library and attacked students. In a poignant comment on the incident, the public intellectual Ramchandra Guha underlines that this did not happen even during colonial rule! Why is the government so perturbed that it is resorting to the use of the draconian Unlawful Activities (Prevention) Act (UAPA) on young adults, a law enacted to charge hardened terrorists? Why does the government see students as the enemy? And why is it co-opting politicians of all hues with a plethora of incentives—and charging politicians who resist “merely” with corruption and money-laundering?

The current Indian government propagates its ideology without entering into a dialogue with anyone, even its coalition partners. Parliamentary protocols like all-party meetings to resolve contentious or national interest issues are anathema to this government. Citizenship is mobilized solely for electoral consolidation. Instead of debate and reason, troll armies are unleashed on those who disagree with the Bhartiya Janata Party’s (BJP) cultural agendas. Those with a different point of view are condemned as anti-national; and institutions that protect democracy buckle under the government’s muscle-flexing.

At such a time, students’ voices have emerged as a strong force that can provide a legitimate rallying point against the government. Historically too, students have often stood up as a moral force against untrammeled power. In the 1920s Bhagat Singh coined the slogan Inqilab Zindabad—long live the revolution—against the colonial state. When the 23-year-old was hanged in 1931, people rose up as one in mourning and in determination to continue the fight. Lajpat Rai, whose death at the hands of the state Bhagat Singh wished to avenge, had set up the All India College Students Congress in December 1920.

In independent India, student involvement in politics can be categorized along three strands: working with political parties; mobilizing workers and peasants; and supporting non-party political processes and new social movements. In all these engagements, students have been involved in discourses and debates, in the best tradition of knowledge as praxis.

Every decade since independence, student movements have worked with political parties and other groups to broaden the ambit of democracy and defend democratic institutions. From the start of building a modern nation in the 1950s, students were at the forefront of the language movement that led to the reorganization of Indian states in the 1960s. The following decade, they spearheaded the Jayaprakash Narayan-led movement against the repressive “Emergency” that had abrogated citizens’ rights and liberties. Students also led identity-based movements like the one for the assertion of Assamese identity in the 1980s; that of the adivasis (indigenous peoples) in Jharkhand and Chhattisgarh; and even of the pahari (hill) people in Uttarakhand in the 1990s. Students also allied themselves with backward castes and dalit groups, pushing to gain access to state and parliamentary power for these groups. Students have furthermore worked to protect workers and peasants’ rights, experimented with alternative political structures and new social movements—questioning developmentalism, patriarchy, the destruction of the environment, the erosion of adivasi rights, caste-based discrimination, and creating rights-based welfare. It is the recent shift in the polarity of the nation’s moral compass, amplified by the Citizenship Amendment Act (CAA), that has riled up the students again.

What is specific to the student protests of recent years? At a time when opposition political parties are in a disarray and NGOs-led social movements are on the wane due to strict compliance laws, the 2020 student movement in Delhi captured the national imagination. Similar protests subsequently erupted in Mumbai, Parbhani, Pune, Ranchi, Gaya, Kolkatta, Malerkotla, Chennai, Bangalore, Deoband, Prayagraj, Aligarh, and Lucknow. The movement arose in the context of protesting the CAA, seen as sundering the secular fabric of the Indian constitution.

This movement has coalesced around three pillars: (i) citizens’ liberty & freedoms as enshrined in the constitution, (ii) taking oath on the Preamble of the constitution and reaffirming its secular character, and (iii) celebrating an inclusive nationalism (epitomized by the national flag). The students, in effect, have thrown a challenge at the sectarian Hindutva of the ruling party. 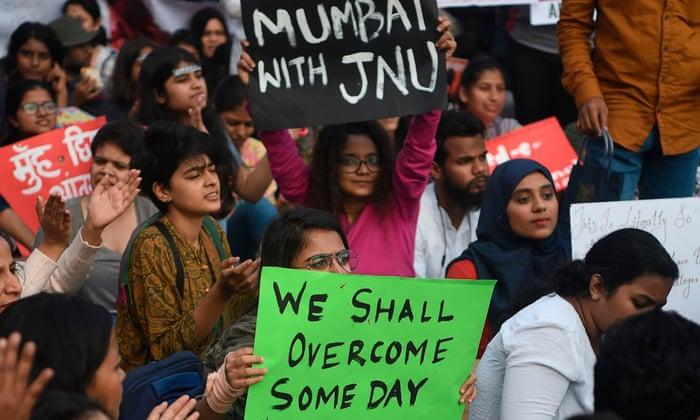 Students in Mumbai, India, protest in solidarity with fellow students at Jawaharlal Nehru University in Delhi after the January 5, 2020 attacks at that campus.

This was the first time in independent India that Article 14 (equality of citizens) & 16 (non-discrimination among citizens) were debated in public places. Scriptures from all faiths were read aloud in Shaheen Bagh after Muslim women joined the protests. Protestors paid respect to Babasaheb Ambedkar, the eminent jurist and dalit icon, under whose guidance the constitution was drafted. These inspirational acts rendered the constitution as a living document, protected not by the state, or by lawyers, jurists, constitutional experts and journalists but by students, women, and ordinary citizens, holding the national flag as patriots. This was a reminder that the BJP’s parent organization, the Rashtriya Swayamsewak Sangh (RSS), had opposed the constitution that did not adhere to the Brahmanical laws of Manusmriti and had opposed the tricolor national flag in favor of the bhagwa dhwaj or the saffron flag, symbolizing the dominant status of Hinduism.

For some weeks, Shaheen Bagh became a cultural mecca that inspired revolutionary fervor. It witnessed reciting of the poetry of Ramdhari Singh Dinkar, including Singhasan Khaali Karo Ke Janata Aaati Hai (Vacate the throne, for the people are coming) and the song of Faiz Ahmad Faiz, Hum Dekhenge (we will see – a call for people’s revolution). It also became the site where the renowned classical artiste Shubha Mudgal sang Gorakh Pandey’s Hamari Khwaishon ka Naam Inquilab Hain (My dream is my revolution) and recited Habib Jalib’s poem, Main nahin janta, main nahin manta (I refuse to acknowledge, I refuse to accept). This was the moment when the intellectual, cultural, and political opposition came together. Even as the national government ignored these protests, eleven state governments—more than 56% of India—publicly proclaimed that they would not implement the contentious National Register of Citizens. This was a symbolic victory, even if a short-lived one.

Are Students a Threat?

Let’s circle back to why students as well as liberal and left voices are considered a threat by the ruling party. The BJP has hegemonic aspirations—it advocates a Congress-mukt (Congress-free) India—a country without a national-level political alternative! Furthermore, its ruling National Democratic Alliance eschews coalition-dharma and dominates its regional partners, even working towards making them redundant. On the eve of the 2019 elections, the ruling party lost state elections in Chattisgarh, Madhya Pradesh, and Rajasthan, demonstrating a loss of steam. And despite thumping electoral wins in 2014 and 2019, its victories have not been complimented by ideological dominance. Only a third of those who voted for the BJP in 2019 supported its Hindutva agenda; 55% voted against it.

Every decade since independence, student movements have worked with political parties and other groups to broaden the ambit of democracy and defend democratic institutions.

Right from the protests following the death of Rohit Vemula (a dalit research student) in the University of Hyderabad (2015), unrest at Jawaharlal Nehru University (JNU), Jamia Millia Islamia, and Aligarh Muslim University have been joined by campus protests in other parts of the country. Students have been at the fore-front of protecting the idea of India as imagined during partition and enshrined in the Constitution. To the contrary, the BJP’s quest for an ideological dominance and a one-party hegemony operates via a sustained attack on those who oppose their Hindutva agenda. It uses an array of repressive tactics to suppress the very foundation of democracy.

In February 2020, Delhi witnessed its worst riot since 1984. Fifty-three people were killed, two-thirds of them Muslims. Most of the homes and shops that were torched belonged to Muslims. Instead of investigating the rioters who caused death and destruction, the police turned against students. The case of Devangana Kalita is instructive. A feminist activist of the Pinjra Tod (Break the Cage) organization, she studied in Delhi University and the Institute of Development Studies, Sussex—my own alma maters. She was targeted and accused during the Delhi riots and subsequently arrested. After she was granted bail—because the Magistrate questioned the criminal charges against her—the Special Investigation Team rearrested her on charges of murder, rioting, and criminal conspiracy. When granted bail again, Kalita was booked yet again under UAPA for committing a terrorist act. All this for sitting in solidarity with women defending India’s constitution. Much like the teenager Greta Thunberg’s famous moral invocation for change at the UN Climate Summit in 2019, these student protests are challenging those in thrall of their own power: "The eyes of all future generations are upon you. And if you choose to fail us, I say: we will never forgive you."

Satyajit Singh is Professor in the Departments of Political Science and Global Studies at the University of California, Santa Barbara.