Central Moscow during the 2018 FIFA World Cup, hosted by the Russian Federation.

This article can be aligned most closely with one of the five R’s outlined in the recent global-e essay by Roland Benedikter and Ingrid Kofler—namely Reframing, through which the specifics of the Russian discourse on globalization may be explored. Russia offers an alternative to the Western globalization project, with emphasis on the national sovereignty of countries and integration based on consent.

It seems that Russia and the US again stand in opposing positions at the international level. In general, relations are cooling down, but does this mean that Russia is really falling into isolation? To what extent is Russia included in global processes? Why does Russia not accept exclusively the western globalization model?

Globalization as a process

Globalization is a complex process entailing the re-shaping of social structures. It leads to a juxtaposition of the global and the local, in which the local culture is hybridized by global influences (Pokrovsky, 2003). This directly influences civil society, which represent the moral force of globalization and is at the center of social order of the global community. In a globalized world, where the tendency is to pick up some global cultural characteristics and translate them into the local culture (and vice-versa), there are some basic values and norms whose broad acceptance is considered by some as mandatory. Whether these norms are accepted or not implies the acceptance of a universal community or exclusion from it, which the dominant discourse frames in “us” versus “them” terms. In fact, the dominant globalization paradigm’s most important feature lies in the capacity to endow its ideology with the status of “conventional wisdom,” such that anything in contrast with it can’t be accepted (Taleb, 2017).

Furthermore, globalization was recognized as having two different dimensions, one internal and one external. Globalization from within refers to the transformation of the political culture of society, as well as its values, family structures, patterns of everyday life, and personal orientations in conformity with some universal standards, most often understood today as normatively rational, liberal values (Beck, 1999).

On the other hand, globalization from outside means the conversion of states’ behavior in world politics and the global economy in correspondence with dominant macro trends (Giddens, 1990). Globalization manifests through these double dynamics as a special dialectic of the universal and the local: it is mediated by local culture, and therefore provokes differentiation and even the disintegration of the whole system.

For its part, Russia has often looked to Western Europe as the ideal socio-cultural model throughout its history, especially in the 18th and 19th centuries, but the influence of this vision was always subject to the prevailing cultural discourse, whether pro- or anti-European. The dispute between Slavophiles and Westerners among the Russian intellectual community in the middle of the 19th century is an example of this tension. Today, Russian politicians often appeal to opposing sentiments of the population in regard to Europe for purely political reasons.

Western and Russian people do not share the same vision about civilization. In the Western perspective, scientific and legal rationality are conceived as the only possible platform for the coexistence of mankind and these are advocated as the most successful civilization project, to be spread all over the world. The final stage of globalization is intended as universal integration; universalism is the inevitable result. Russians, on the other hand, support the view that each country, each people is civilized in its own way. Moreover, Russians do not consider that Europe has completely solved a fundamental dilemma of society: the relative value of personal freedom versus social security. To strengthen one is to weaken the other. While Western Europe’s solution was to try to maximize both as equally important, it is not true that Russians conceive of personal freedom as less important than Europeans do, it is just conceived in spiritual rather than in rational terms—spiritual understood as creative freedom, often denoted in Russian by the word “will” (Mezhuyev, 2010). This is the reason why many Russian intellectuals believe that Russia is not just an integral part of European culture, but actually surpasses it. Recently, in both Russia and Europe, intellectuals and common people often confuse political liberalism with economic liberalization. The latter took place in Russia starting in the 1990s, yet during that period liberalism led to the disruption of traditional Russian values.

...the dominant globalization paradigm’s most important feature lies in the capacity to endow its ideology with the status of “conventional wisdom”

Assuming the globalization from within perspective, we can recognize two different types of “Russians” today: the ‘advanced consumer’, who lives from one pleasure to another, a life marked by materialism and travel, a comfortable and safe life; and the “thief of Europe,” who admires Europe for its liberal thought, for its economic, social and political freedoms, but sees Europe as a sort of museum which is worth appreciating and visiting, but not living in it.

Russian globalization from outside, that is, the approaches Russia takes in foreign policy, can be summarized in relation to three different types: liberals, who would like to turn Russia into an integral part of Europe; realists (statists) in the influential center of the polycentric world; and nationalists, ideologues of right-wing anti-globalism, who want an alliance with the traditional right-wing in Europe. These three types, which emerged at different times in the history of modern Russia, are now configured in understandable trends. The realists—state officials—determine the parameters of Russian foreign policy, a result of the very recent history of the country’s relations with the West, and largely due to the latter’s policy of containment. In the 1990s, this course was understood as a process of the "westernization" of Russia and the imposition on it of a subordinate geopolitical role, a policy that went unchecked until 2000 when Putin came to power. The issue was raised by Putin in 2007 during a well-known speech at a conference on international security in Munich. 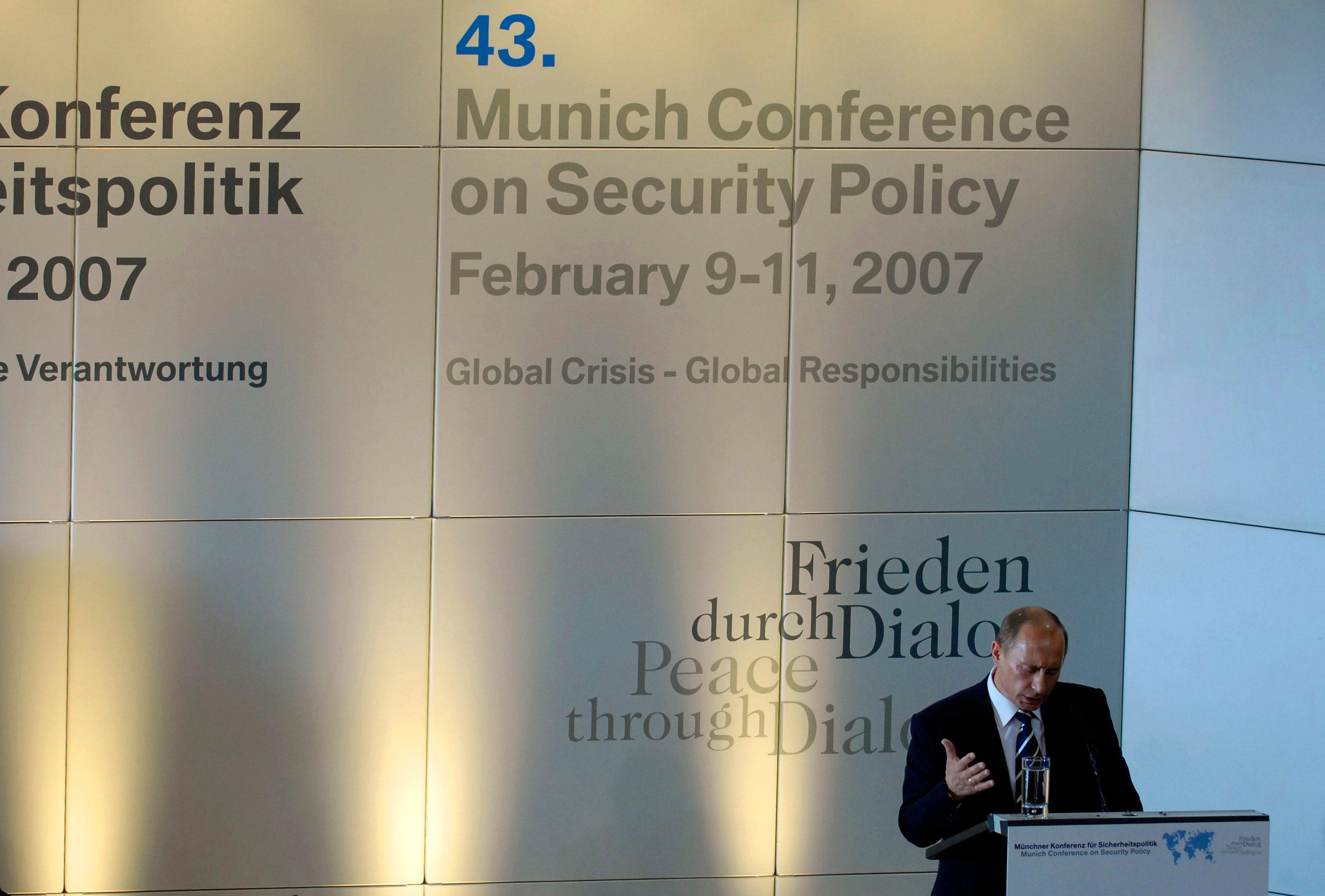 Russian leader Vladimir Putin speaks at the Munich Security Conference in Germany on 10 February 2007. (Source: US Department of Defense)

The Georgia-Ossetia conflict of 2008 continued to worsen relations between the EU and Russia. But even at that moment there was still hope for rapproachment. During a June 2008 visit to Berlin, President Medvedev talked about Russia as a branch of European Christian culture, winking at the West even though it was from the beginning of the 2000s that the US tried its best to take local geopolitical advantage of a weak Russia, which at the time was undertaking deep reforms especially of its economy. Therefore, also in 2008, the Foreign Minister Lavrov stressed the difference between Europeans and Russians and pointed out that the competition was becoming global—not just economically but mostly in terms of culture, values, and models of development. A second reason for realists to take charge of Russia’s foreign policy approach is the decline of liberal global hegemony, and the third reason, the unity of the Western community, is no longer axiomatic. All these factors steered Russia toward seeking its own model of development and culture, different from the dominant one and in contrast with it. Western values are now conceived as inappropriate and as threats to traditional Russian values. Furthermore, western-shaped globalization is very rapid, posing high uncertainties about future development with an associated high level of risk. Its weakening opened the way for Russia to develop its own model, one not including the imperialistic global aims of the Americans.

Russia, in the mosaic outlined above, is a country that had been weak internationally for some years, particularly in the late 1990s and early 2000s when it was subject to American-led globalization. In 2007 Russia re-emerged with new power, offering its own model of development and culture. This was facilitated by the weakening of America’s global hegemony which left more space for realist views among the Russian statists. Russia today is one of the key players in world politics and the world economy. Russia thinks and acts globally. It is a globalized country in the fight against the dark side of globalization, but is at a certain distance from managing global security in the military sphere due to the actual lack of cooperation with NATO and Washington.

Mezhuyev, Vadim. 2010. “In search of the universal civilization.” In Dialogue of Cultures and Partnership of Civilizations: the Making of a Global Culture. Proceedings of the 10th International Likhachov Scientific Conference, May 13–14, 2010, 126–128. St. Petersburg: SPbUHSS Publishers.

Marina Glaser (Kukartseva) is Professor in the Department of International Relations at the Higher School of Economics National Research University in Moscow, Russia.