Graduates at the University of Sydney.

COVID-19 is a human crisis that has hit international education particularly hard.1  International students have been directly affected by air travel cancellations and quarantine measures which have made border-crossing almost impossible. Like many, they are victims of this crisis—particularly those from China, who constitute the largest market within the global international education sector. Chinese international students have faced a double stigmatization since the outbreak of COVID-19. First, they have been discriminated against by the “Chinese virus” stigma while they were overseas in the early stage of the pandemic. Second, they have been targeted in multiple ways by the anti-China politics triggered by the coronavirus.

Contemporary Chinese international student mobility officially commenced after 1978 in line with the promotion of Chinese economic reform. Such mobility is closely related to the concept of ‘ti-yong’ (体用)—the distinction between the ‘essence’ (体 ti) of Chinese culture and ‘practical-use’ (用 yong) (Gao, 2009). To satisfy China’s economic needs (用yong), in the period 1979-1986, about 3,800 international students from China were funded by the Chinese Government each year (Chen, 2007, p. 31). Self-funded international education began over the same period with approximately 7,000 in total. However, since the value of English is high in all disciplines, education systems, and job markets, self-funded international education became a trend between 1985 and 1988, with over 16,000 students of all kinds approved to study overseas during this period. In 2018 alone,2 around 662,100 students left China to pursue overseas studies making China the largest country of origin for international students in the world. Chinese students mostly study in English-speaking countries such as the USA, UK, Canada, Australia, and New Zealand, with a smaller number in Japan, South Korea, and other Asian and European destinations. It was estimated that a total of nearly six million Chinese students had studied abroad between 1968 and 2018 (Li, 2018; Xin Xue Shuo 新学说, 2019). But it seems that the catastrophic coronavirus pandemic may change their study plans, due to the double discrimination they face in traditional destination countries.

In the early stage of the pandemic, from early February to late March when the virus started to sweep outside of China, Chinese students studying overseas suffered from a general anti-Asian or anti-Chinese pattern of discrimination. This was mainly caused by the mysterious origin of the virus, reportedly associated with one of the wet markets in Wuhan.3  Some of our students reported that they were criticized by their foreign peers who claimed that all Chinese regularly eat bats or “weird” wild animals. In addition, racially motivated actions proliferated, such as threatening graffiti scrawled on the garage door of a Chinese-ethnic family in Melbourne that read: “COVID-19 China Dies.” Divisive public comments included the “Time to go home” statement directed at foreign students by the Australian Prime Minister at an April 3 press conference. This only contributed to dividing an already fragile multicultural Australian society and undermined the social and psychological welfare of Chinese students in this unprecedented year. One student stuck in Australia told us that “it is not the right time to politicize the crisis… I like Australia, but they [people in Australia] shouldn’t treat us in such way. I am devastated.”

Later, attacks escalated due to persistent demands from the USA and Australia that China take the blame for the COVID-19 crisis. This has furthermore triggered bilateral political and economic tensions as well as a deterioration of diplomatic relations. Since April 2, over 410 reports of COVID-19-related racism have been documented in Australia. In the Australian COVID-19 Racism Incident Report Survey,4 15% of 410 respondents identified themselves as international students, of whom 80% were from China. Considering that more than 165,000 Chinese students currently study in Australia (a quarter of all international students5), this report indicates strong anti-China and anti-Chinese sentiments there. With the deepening of the tension between the Five-eye Alliance and China, and different queries about China’s way of handling the pandemic in the early stage, Chinese students seemed to bear the brunt of such conflicts.

Policymakers need to think carefully about the new dynamics of international education in terms of the huge market share of Chinese international students...

On Facebook, Instagram, and Twitter, hashtags such as #chinesevirus and #kungflu, popularized by the American President Donald Trump, have further fuelled a rise in anti-Chinese online bullying. Trying to play the game of ‘blame (China) for gain (for votes)’, Trump implemented a number of unprecedented anti-Chinese international education policies, such as banning some postgraduate-level Chinese students and researchers in advanced sciences and technology from entering the US. He accused them of stealing intellectual property from America and having links with the PRC military. This policy was endorsed by some U.S. Senators as ‘a targeted approach’ to handle security threats from China and was put into effect on June 1. At least 3,000 Chinese students would be affected by it according to estimates of the American Society for Biochemistry and Molecular Biology (ASBMB).6

Connecting to the concept of ‘ti-yong’ and the status of English in Chinese education system and society, millions of Chinese students have aspired to study overseas, with most preferring to study at world-leading universities where English is the primary medium of instruction, but this could change if discrimination persists. Many Chinese students may have to reconsider their study options in order to address specific concerns over safety, health, and the quality of education. The latter has always remained the top criterion in the selection of preferred study abroad destinations, as evidenced in the 2020 Report on Chinese Student Overseas Study published on June 28.7 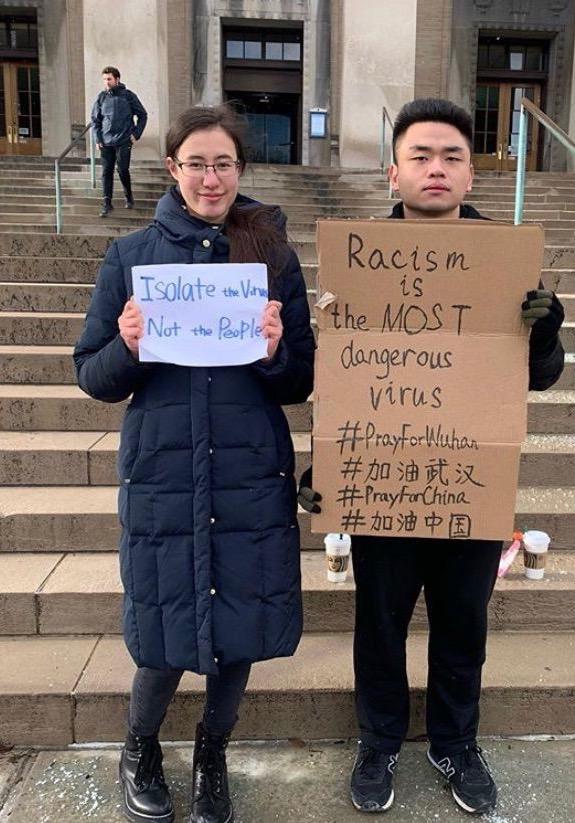 Students in front of the Pattee-Paterno Library at Pennsylvania State University in early 2020. (Photo: Wenqin Gan via The Daily Collegian)

Besides Australia and the USA, similar trends are emerging elsewhere. A recent study by the British Council8 in April revealed that 39% of Chinese students studying in the UK were unsure about their continuation of current study plans (n=10,808). Around late April, Lingnan University9 distributed a questionnaire seeking responses of non-local students in Hong Kong and students in mainland China (n=2,739) about study plans in light of the crisis. 84.4% of respondents indicated that they would not study overseas, with the rest staying positive about their study plans once the crisis is over. But this cohort preferred destinations such as Japan and Taiwan (equally 10.8%) rather than traditionally popular English-speaking countries.

Although Hong Kong has usually been an outlet for them, for complex political reasons the survey results were relatively negative concerning Hong Kong’s safety and friendliness to mainland Chinese. Among students we consulted, a majority held a “wait and see” view as the situation has been evolving, especially given how online learning has become a ‘new normal’ that they have adapted to regardless of their physical locations.

Chinese students may have to reconsider their study options in order to address specific concerns over safety, health, and the quality of education.

According to a QS report, prospective Asian students may increasingly pursue study in intra-regional universities.10  Malaysia, Singapore, and the Philippines are the leading Asian study destinations, where English is likely to be used as a lingua franca (ELF). Recently, schools in these countries have attracted more transnational student applications, shifting the scope of international education. Students headed to these destinations do not have to force themselves to be ‘perfect’ in English, using it instead for more meaningful and intellectual exchange. The concept of ELF emphasizes functional proficiency of English, which is the primary tool for cross-cultural (mainly spoken) communication (Kirkpatrick, 2018). Such a change in the status and perceived purpose of English encourages a belief in taking ownership of the language, a shift away from Western dominance toward a greater variety and diversity in international education. Against the current situation of increasing anti-Chinese sentiment in the West, whether Asia destinations will replace those in the West as preferable education choices for Chinese students wishing to study abroad is, for now, an open question.

International students from China are facing a most difficult, confusing, and sensitive time, and they require support from global communities. The ramping up of anti-China / anti-Chinese sentiment seems to be part of a rise in xenophobia and hatred worldwide caused in part by the pandemic. Chinese students deserve to be treated fairly in their pursuit of quality education overseas and should not be treated as “cash cows.” Despite the pressures they currently face, they will continue to engage in global connectivity and scholarly endeavour. As history shows, their involvement in and contributions to international research and collaboration have been enormous. Whether they continue to pursue them Western countries is for now uncertain, but given the predicted five years to recover global mobility,11 the COVID-19 pandemic urges us to rethink educational equity on the shifting horizon of transnational student choices.

1. Christopher Ziguras and Ly Tran (2020, Feb 6). “The coronavirus outbreak is the biggest crisis ever to hit international education.” The Conversation. https://theconversation.com/the-coronavirus-outbreak-is-the-biggest-cris...

3. Wet markets: There was a massive misconception of the term and concern of its lost in translation, which specifically connecting the ‘wet markets’ with illegal wildlife trading and eating habits that caused the virus and its spread as noted in the influential White Paper (Human Society International, 2020). The vast majority of ‘wet markets’ in China and other Asian countries are indeed farmers’ markets or weekend markets. People rely on them for their everyday living and fresh foods consumption (73% reliance on living in China), despite a very minimal number illegally trading wild animals. As Lin (2020) commented, the misinterpretation of ‘wet markets’ became “racially and politically motivated moral judgments of the Chinese” and most Chinese people are disgusted about illegal trading of wild animals or eating them.
·      How many do Huanan seafood markets exist in China? Are farmers’ markets necessary to remain? [全国还有多少华南海鲜市场？农贸市场还有必要存在吗?] (2020, 01 March): https://finance.ifeng.com/c/7uTkRG8cpfs
·      Coronavirus: Wuhan wet market wasn’t a source of virus – Chinese scientists, Newshub on 22 July 2020: https://www.newshub.co.nz/home/world/2020/05/coronavirus-wuhan-wet-marke...
·      Lin, D. (2020, April 30). “Lost in translation: COVID-19 and China’s ‘wet markets’.” Melbourne Asia Review, 2. doi: 10.37839/MAR2652-550X2.3. https://melbourneasiareview.edu.au/lost-in-translation-covid-19-and-chin...
·      Humane Society International. (2020). Wildlife Markets and COVID-19. Washington, D.C. https://hsi.org.au/uploads/publication_documents/Wildlife_Markets_and_CO...

Dr. Grace Yue Qi is a Lecturer and Researcher at Massey University, New Zealand, and an Adjunct Lecturer at Griffith University, Australia.

Dr. Shaolei Wang is a Lecturer in the School of Journalism and Communication at Nanjing Normal University, China.

Chujie Dai is a PhD candidate in the School of Humanities at Massey University, New Zealand.