The universal subordinate position of women cuts across class, caste, race, and ethnicity, and has multiple manifestations. The idea of providing credit to women and enabling them to organize themselves in small groups to use these funds for improving their economic opportunities and socio-political status drove some visionaries and policy makers in South Asia to launch the first microcredit initiatives between the 1970s and 80s. Their underlying philosophy was that once women had both access to and control over money, they would have a greater say in family affairs and enjoy a higher status in their social environment, thereby making a significant contribution to the process of women’s empowerment.

Upon implementation the idea caught fire and spread rapidly, particularly in South Asia, with the total number of microcredit clients represented largely by women from relatively poorer classes. Large numbers of poor women in Asia-Pacific countries also became members of microcredit groups. Yet patriarchal resistance proved to be both strong and widespread, and success—measured by gains in women’s economic and social standing—did not come easily. Neo-liberal policy makers had other priorities such as economic growth, profit, and financial sustainability rather than working towards women’s empowerment. Microcredit’s peak was achieved in 2010, after which client numbers declined due to a crisis in this sector. In a new book,1 we tried to capture how the struggle for making microfinance an instrument of women’s uplift has evolved in South Asia as well as a few countries from other parts of the world. For this essay we first discuss some of the history and institutional context before explaining the basic dynamics of the microcredit experience and discussing successes and shortfalls.

The pioneer microfinance initiative was the Grameen Bank model developed by Muhammad Yunus, launched in Bangladesh in 1983. Through a set of practical ethical guidelines known as “the 16 Decisions” that local “self-help groups” (SHGs) were obliged to adopt, the phenomenon of microcredit and microfinance gained currency by facilitating the provision of very small loans to poor women who, lacking financial collateral, were considered “unbankable.” Among other examples, the Self Employed Women’s Association (SEWA), an Indian trade union of women in the informal economy, had already started the SEWA Cooperative Bank in 1974 to provide loans to low-income, self-employed women. Similarly, in Vietnam the Bank for the Poor has served the same purpose. But even in developed countries, microfinance initiatives have gained purchase. For example, in the US an NGO called Women’s Economic Ventures has been active since 1991 providing credit to help single and disadvantaged women to develop microenterprises.2

Troubled by the trend of growing social inequalities, the unevenness of regional development, and the persistence of various forms of discrimination against women, the United Nations declared the year 2005 as “the year of microcredit” in consideration of its perceived potential to alleviate poverty and help women’s development. Here the words microcredit and microfinance have been used interchangeably although, strictly speaking, microfinance is a broader term that includes microcredit and other small financial services for purposes such as health and education. Some of these forms of support are also called ‘micro-services’ whose scope has continued to grow. Women participating in all these activities of the microfinance system are encouraged to save small amounts of money for emergencies and for other purposes. After these institutions appeared as the dominant agencies on the local scene in many areas, microfinance began to acquire a wide variety of meanings aiming at providing many kinds of services to women and poor people.

In regions far beyond its birthplace in Bangladesh and India, microcredit clients have demonstrated their enthusiasm in procuring loans for productive purposes. Yet despite gaining popularity at both grassroots and UN levels, experts have been divided on the relevance of microfinance and on the question of whether it actually played any positive role in eradicating poverty. A related and fiercely debated question is whether or not women have been empowered in transforming the patriarchal structure of their societies, particularly in the South Asian context. Thus, a research exercise to assess its impact was deemed important because four decades had passed since microcredit became part of public policy, as well as a major focus for international donors, with some $25 billion in capital in circulation under this scheme by 2007.3 As of 2009, microcredit had reached 190 million people globally, of which the absolute poor constituted 63 per cent. Among these, 81 percent were women.4

...microfinance began to acquire a wide variety of meanings aiming at providing many kinds of services to women and poor people.

Drawing on research from Peru, Iran, Vietnam, the US, Haiti, Philippines, Egypt, Bangladesh, Pakistan, and India for our analysis, it is clear that the discussion on microcredit involves sharp debates on its objectives, principles, and practices, and that diverse lessons from the many forms and contexts of microfinance may be derived. Almost all studies testify that the poorest of the poor do not benefit. This must be taken as an obiter dicta and strong reminder for remedial reform, since this reality defeats the social philosophy and idea of justice that motivates the formation of self-help groups. In the case of India, research demonstrates that Micro Finance Institutions (MFIs) are not a harbinger of structural transformation, yet it can be acknowledged that the microcredit experience “produces a kind of social bonding among women to work in a united fashion to champion the cause of women.”5  Together with the constitutionally guaranteed 50 per cent reservation of elected seats for women in local governments, which has gradually become common in most Indian states, it is important to underscore the potential of microcredit to be used as a political tool for changing social structures.

On the other hand, for market fundamentalists, MFIs simply open up a new market segment—a reductionist mindset that goes against the very grain of all the avowed goals of microfinance. For neoliberals who want to avoid any structural change in society, MFIs are welcome tools that can mitigate the potential threats and embarrassments of a poverty-ridden world. They are easy antidotes to whatever market failures may happen—and in this way, initiatives in pursuit of social goals are bracketed out as redundant pursuits. This is even the case in Bangladesh, according to one of our studies.6 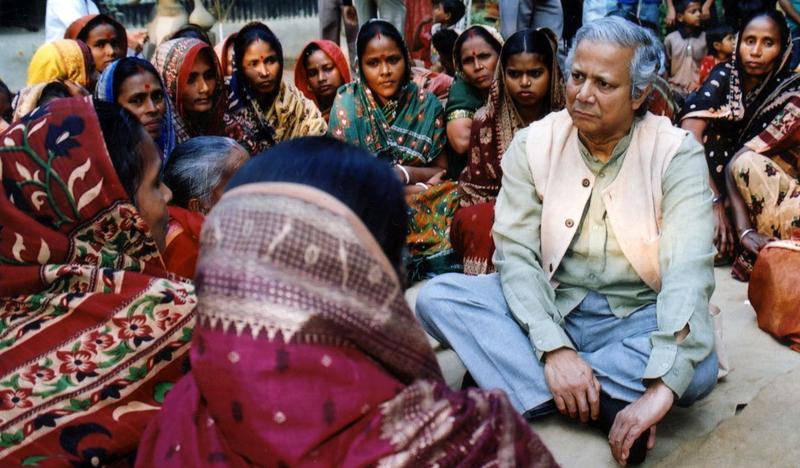 Besides these broader political and structural concerns, interpersonal issues and ego clashes among participants can also be a detriment to successful and even long-standing projects, as for example when the more educated and better off women in an Iranian bee-keeping collective fought against older and less educated women, an internal struggle that ultimately proved fatal to the project. This case study and several others in our volume unequivocally point to the need for building capabilities (in education, skills, health etc.) as a precondition for poverty eradication.

What are the messages?

Poverty is a multi-dimensional deprivation, and microcredit—however important—cannot penetrate beyond a limited social space. Unless and until actors achieve greater political empowerment, MFIs will find it difficult to make headway in bettering the quality of human life.

A second major message of our research is that there is no standard model that fits all times and regimes. Success is contextual and considerably influenced by culture, tradition, mutual trust, and collective power. Furthermore, microcredit per se cannot alter social relations and norms that govern gender relations. Microcredit can be a potent force of change only when economic and social paradigms of development themselves also change. Still, in cases where MFIs do succeed, they can keep social issues alive, and this is no small achievement. For example, the problems of women’s relative financial autonomy, decision making power, health, education, and political empowerment have risen in public awareness and are burning issues. Closely related to them is the fact that in the age group of 0-6, the child sex ratio—defined as number of female children per 100 male children—is continuously declining. According to the Indian census of 2011, the ratio declined to 91from 93 in 2001.7  On the other hand, endemic cases of failure can send negative signals in a present day world in which patriarchal values continue to dominate, often violently. A fourth finding is that, inter-alia, the success of a microcredit project depends (a) on the nature of the organization (bank, NGO, government, etc.) from which a women’s group borrows money, and (b) on the nature of group dynamics among the beneficiaries. Passive beneficiaries can seldom become active agents of change.

Microcredit can be a potent force of change only when economic and social paradigms of development themselves also change.

Finally, poverty and gender inequity continue to yawn wide and deep. For example, the 2018 UNDP Multidimensional Poverty Index reports that 48 percent of people in India live in extreme poverty, and it is not even the poorest country in the world.8  And a very alarming trend related to gender inequity is increasing violence against women. While part of the rise could be due to increased reporting, objectively speaking women are still perceived as commodity and are subjected to violence both in public and private space in spite of political and economic measures. In India, for instance, the rate of all forms of violence continues to be very high, ranging from 56.6 percent in 2014 to 54.2 in 2016 according to a government source.9

It is clear from our and others’ findings that the UN, lending agencies, policymakers, media executives, and development thinkers around the world have to see these continued trends in poverty and inequality of women as a colossal social failure. Many have enlisted the myth of neoclassical economics to logjam human progress. Will the MFIs acquire strength to combat and overcome this recourse to a socially and humanly exhausted myth? It is hoped that research like ours can be a telling pointer in support of the mission of social transformation.

2. Marsha Bailey, 2018. “Microenterprise Development and Women in US: Perspective of a Microfinance Organization,” in Mohanty and Faessel (eds.) Our Money Our Lives, pp. 255-274

5. Bidyut Mohanty, 2018. “Decentralization and Community Governance in India: A Gender Perspective,” in Mohanty and Faessel (eds.) Our Money Our Lives, p. 191

6. Lamia Karim, 2018. “Making of ‘Entrepreneurs’: Women and Microfinance Practices in Bangladesh,” in Mohanty and Faessel (eds.) Our Money Our Lives, pp. 131f.

Bidyut Mohanty is Head of Women’s Studies at the Institute of Social Science, Delhi.