Three preoccupations of states are intricately intertwined within the realm of international relations as pertaining to the relative positions, interactions, and capabilities of state actors (and, to an extent, non-state actors as well). Security, as most scholars would agree, is perhaps the most critical goal for states, and energy acquisition plays a particularly crucial role here because it enables the other two preoccupations: physical survival and economic development. Geographical location dictates resource availability and the costs (economic and political) of energy procurement. This essay examines some recent globally tendencies in the geopolitics of energy security, particularly in relation to the Russia-E.U. Nord Stream 2 project.

The Case of Nord Stream 2

Nord Stream is a natural gas pipeline that serves as a gas transportation facility from the Russian Federation (Vyborg) to Germany (Greifswald). It is owned and operated by Nord Stream AG. The preparatory work for the project started in 1997 with the official inauguration in November 2011, and throughout these fourteen years the stakeholder structure evolved significantly. Testing work on the Nord Stream 2 (NS2) gas pipeline was set to start in the second week of June 2021 according to Alexander Drozdenko, the governor of the Leningrad region (oblast).1  Debate over this extension of the project in light of environmental, security/military, political, and even ethical concerns is ongoing.2

According to official information provided by the Nord Stream 2 AG, the company behind the current project, “The Nord Stream 2 Pipeline will transport natural gas into the European Union to enhance security of supply, support climate goals and strengthen the internal energy market.”3  Yet, Central and Eastern European countries such as Poland regard the project with great suspicion, citing many concerns including intelligence and military threats,4 energy security of the region and the whole E.U.,5 and challenges to the unity and solidarity of the E.U. especially with respect to its future foreign policy vis-à-vis Russia.6  Beyond the E.U., Nord Stream 2 has also been met with ambivalence.

Under the Trump administration, the USA was vehemently opposed to the completion of NS 2. Indeed, it was believed that if anyone could have stopped the project it was the U.S., especially considering that sanctions were introduced in 2019. These sanctions targeted any company that would help Russia’s state-owned gas company, Gasprom, to complete the project,7 reflecting the Trump administration’s positoin that both Russia and China were to be treated as strategic adversaries. As stated in the 2018 National Defence Strategy: “The central challenge to U.S. prosperity and security is the reemergence of long-term, strategic competition by what the National Security Strategy classifies as revisionist powers. It is increasingly clear that China and Russia want to shape a world consistent with their authoritarian model—gaining veto authority over other nations’ economic, diplomatic, and security decisions.”8

However, the Biden administration recently waived the Trump sanctions, clearing the way for the completion of the pipeline—which, in any case, had already been substantially realized before the introduction of the sanction regime. The Biden White House is seeking to rebuild ties with Germany after their deterioration under the previous administration.9  But as part of its attempt to reset American foreign relations after the unprecedented reversals of the Trump years, the current administration also rather quickly acted to re-extend the START nuclear treaty with Russia for another five years. According to US Secretary of State Antony Blinken, “Especially during times of tension, verifiable limits on Russia’s intercontinental-range nuclear weapons are vitally important.”10  Still, the move seems remarkable in light of America’s strong opposition to Russian annexation of Crimea in 2014 and the still simmering Russo–Ukrainian war centered in the Donbas region, with a considerable concentration of Russian forces along the Ukrainian border even today. More recently there have been serious tensions over cyber-warfare attacks on U.S. institutions and infrastructure that America blames on Russia. Why the seeming “appeasement”?

The USA vs. China Connection

The relationship between the U.S. and China is complex. Increasingly, the technological competition has been recognized by U.S. lawmakers, who only recently passed the U.S. Innovation and Competition Act which mentions China a staggering 97 times throughout its 85 pages. Moreover, one of its sections (Division E) is devoted entirely to the country (Meeting the China Challenge Act of 2021), mentioning Chinese manipulations in the U.S. market, money laundering, malign influence in the private sector, and human rights abuses to name just a few, referencing as well the use of sanctions against PRC within numerous contexts.11  On top of all that, there is an ongoing competition in space between the two countries. 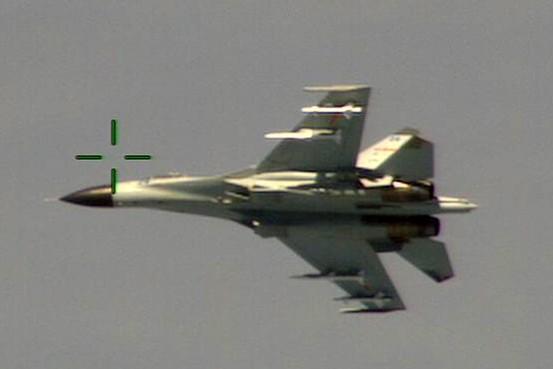 Chinese jet fighter intercepts at close range a US surveillance plane off coast of China, 2014.

I propose that our understanding of the international conundrum involving the USA and PRC should be enriched through the lens of an analysis produced by Andrew Krepinevich, recently published by the Center for a New American Security. He states: “Now, however, with the rise of revisionist China and Russia, the United States is confronted with a strategic choice: conducting contingency planning for a protracted great-power conflict and how to wage it successfully (or, better still, prevent it from occurring), or ignoring the possibility and hoping for the best.”12  History teaches that no country can successfully wage a systemic war on two fronts by itself. If both China and Russia are seen as strategic challengers to American hegemony in the global international system, it follows logically that the U.S. needs to render one of them at least neutral (i.e., to appease them) when in conflict with the other. Given the technological, economic, military, or population challenges from China, the most optimal choice would be to make Russia indifferent to American ‘elbowing’ in Central Asia or the Middle East vis-à-vis China. The price for such indifference also seems logical: the dominance of the Russo-German tandem in Central and Eastern Europe and German dominance in the EU. This would explain the latest developments in Europe regarding energy security, and in particular, the Biden's administration position on Nord Stream 2 and the currently observed diplomatic offensive with both Germany and Russia.

If both China and Russia are seen as strategic challengers to American hegemony in the global international system, it follows logically that the U.S. needs to render one of them at least neutral.

It is worth also bearing in mind that gas as a source of energy is, in fact, quickly moving into the past. The future speaks instead, voluminously, of hydrogen. It is therefore unsurprising that Russian Deputy Prime Minister Alexander Novak recently admitted that Russia will set up a working group on hydrogen production with partners from Germany, France, and Australia.13

Geopolitics in the 21st Century

Unlike in the 19th Century, contemporary strategists have to embrace the non-territorial and non-material elements of influence in their calculations. The new geopolitics focuses less on territory as a physical phenomenon and more on various tools that can be utilized to control it, as well as the political processes that occur in relation to it. Information, social media, societal relationships, and—not least—energy distribution are some of the most obvious choices for policymakers and their national security advisors. This is not to say that sheer military might is no longer relevant.14  It is still used in peacetime as a political tool and reserved for “emergency” situations. But as it has been demonstrated over and over again, and as now demonstrated in the case of Nord Stream 2, energy is of utmost importance for states in their national and global security strategies. A strategic geopolitical approach in this regard proves timeless, both in state planning and in global policy analysis.

8. Summary of the 2018 National Defence Strategy of the United States of America. Sharpening the American Military’s Competitive Edge, Department of Defence, available at: https://dod.defense.gov/Portals/1/Documents/pubs/2018-National-Defense-Strategy-Summary.pdf accessed 14 June 2021.

13. “Russia to set up working group on hydrogen with Germany, France and Australia,” Reuters, 5 June 2021, available at: https://www.reuters.com/business/energy/russia-set-up-working-group-hydrogen-with-germany-france-australia-2021-06-04/ accessed 17 June 2021.

Krzysztof Sliwinski is Associate Professor and Program Director of the Master of Arts in Global Society at Hong Kong Baptist University.