For decades, Thailand has been hailed as a poster child of public health, praised for its success in HIV prevention, health literacy, and expanding universal coverage, setting an example for many countries in the Global South. During the recent coronavirus outbreak, Thailand has seemed to fare reasonably well. Compared to other countries regionally and globally, Thailand has had a relatively low number of cases and deaths. However, the virus is not simply about numbers. Upon closer inspection, the disease has forced Thailand to confront its fragmented self. Taking border as a productive metaphor, this essay offers two conceptualizations of border—material and symbolic—to expose Thailand’s multiple fault lines during the coronavirus outbreak.

The first conception of border is the external border, the literal boundary that demarcates the nation’s sovereignty. As much as many would love to believe the world has become borderless, the coronavirus has come to harden these borders, with nation-states scrambling to shut their national boundaries in fear of importing new infections. Thailand was the first country outside China that found a positive case, in late January 2020. The patient, a taxi driver with no travel history to China, believed he might have contracted the disease from one of his Chinese passengers. This caused much public alarm given that Thailand is one of the most popular destinations among outbound Chinese tourists. The first days of the pandemic saw mayhem in the government’s response, exacerbated by the Public Health Minister’s xenophobic rants against farang foreigners.

Despite being a country challenged by a high risk of widespread local transmission, Thailand was one of the last countries in Southeast Asia to seal its border, as the country weighed the dilemma of protecting the public health and propping up a deteriorating economy. For tourism-reliant Thailand, the decision to shut its borders entirely was a difficult one. Eventually, after much pressure from experts and citizens alike, the Thai government bit the bullet and issued a border control order on April 3, 2020, banning incoming international flights to all its airports. However, the initial order was in effect for only three days, suggesting their underestimation at best, and desperation at worst. The order was later extended again and again, and, at the time of writing, the borders remain closed, except for repatriation flights. Such a wait-and-see attitude would characterize much of the Thai government’s approach. Ironically, while the decision to close borders is often thought of as a choice, an independent exercise of national sovereignty, the Thai experience suggests a more elusive decision as the country clumsily weighs the relationship between public health and economic well-being.

With its border sealed, the country now had to confront the borders from within. Thailand is long known as a centrist state, in which the capital of Bangkok controls and commands power, resources, and decision-making, thereby mocking the national-regional-local tripartite government enshrined in the Constitution. In many ways, the country’s political conflicts of the past decades, color-coded in red and yellow, reflect regional discontent with the central ruling elite. Local elections were banned quickly after the junta came to power in 2014, and the order still remains in effect today, despite a national election in 2019. The COVID pandemic helpfully dismantled such centrism, even for fleeting moments, allowing provinces and cities to experiment with governance innovation.

In a bid to prevent transmission in their own jurisdictions, the provincial administrations hurried to find measures to protect their residents. The Province of Buriram was one of the first to take the initiative. Backed by Newin Chitchob, an influential politician-turned-businessman, Buriram did the unthinkable by issuing a preventive provincial lockdown, despite there being no reported cases. Once an economic backwater, Buriram set a precedent for other provinces to follow suit and take actions appropriate to their localities. During the month of April 2020, many Thai provinces found themselves experimenting with a wide range of ordinances and by-laws they had at their disposal, from interprovincial travel bans to mall closures, testing the boundaries of what is possible. Similarly, while the cash-strapped central government struggled to fork out aid money to those affected, the executives of Prachuap Khirikhan, a seaside province, donated half of their salaries to the cause. The incident stood in stark contrast to the national Senate, whose members refused to give up their salaries despite the pressure by Thai taxpayers who long viewed the upper assembly as an impotent, partisan body appointed by the junta to simply protect the latter’s interest.

The COVID pandemic helpfully dismantled such centrism, even for fleeting moments, allowing provinces and cities to experiment with governance innovation.

Much to the delight of proponents of decentralization, the governance innovations testify to the possible horizons of a more decentralized, fairer Thailand. However, aiming to regularize provincial regulations, the Prime Minister urged on several occasions that all regulations go “in the same direction” in the name of uniformity, reflecting his deep-rooted centrist attitude that views variance as deviance. Nonetheless, the critical situations in many Thai provinces allow their governors to devise locale-specific decrees. At the time of writing, northeastern Korat, for example, still imposes a 14-day isolation rule on incoming travelers. In a markedly different core-periphery relationship, several state governments in neighboring Malaysia, a federal state, defied Kuala Lumpur’s proposition to ease the lockdown in early May, after appraising the situation in their respective jurisdictions as yet unsafe. [1] As the Thai government urges the citizens to embrace a post-COVID-19 ‘new normal’, it too would do well to question the normativities in its own territorial governance.

While such governance innovations are to be celebrated for their pragmatism, the concept of the ‘province’ as a field of operation reflects a misconstrued, yet dominant geographic assumption. Insights from geography remind us that people are mobile and that borders are fluid. Like many countries, a hierarchical framework informs Thailand’s administrative apparatus, which is organized by changwat (province), amphoe (district), and tambon (sub-district), which are, after all, artificial boundaries. Contrived as they are, they serve as a frame of reference, reflecting the persistent topographic bias in policy and planning practices in Thailand. However, as revealed by the lockdown, such topographic biases can significantly inconvenience daily life. Those living in one province but working in another run the risk of ‘breaking the law’ by crossing the provincial border in their daily commute. At one point, physical barriers were placed at the border between the two southern provinces of Chumphon and Surat Thani to prevent interprovincial travel, much to the residents’ annoyance. Jokes were aimed at Bangkokians who made booze runs to nearby Samut Prakan because alcohol sales are banned in Bangkok. While the debate has thus far been framed as an economy-vs-public health dilemma, more attention needs to be paid to the administrative boundaries that constitute the dilemma in the first place.

While the physical borders may cause inconveniences at most, symbolic borders are much more troubling—in fact, devastatingly so. The lockdown measures have had a disastrous impact on a wide range of Thai citizens, particularly the underprivileged. News that the virus has not spared world-renowned celebrities, athletes, and politicians may lead us to believe in an indiscriminate disease, one that affects the rich and the poor alike. But to say the virus is ‘class-blind’ cannot be further from the truth, for that would obscure the diverse experiences of our different social strata, flattening the social geography of uneven vulnerabilities. In a country driven in large part by informal, unregulated economies, the lockdown means sudden job loss and lack of unemployment benefits for street vendors, petty traders, and manual workers whose social safety net is thin in the first place. Desperation is an understatement, as many resorted to taking their own lives. Ironically, during an epidemiological drive to contain the transmission of coronavirus in Thailand, the number of lockdown-induced suicides easily rivals that of COVID-related deaths. 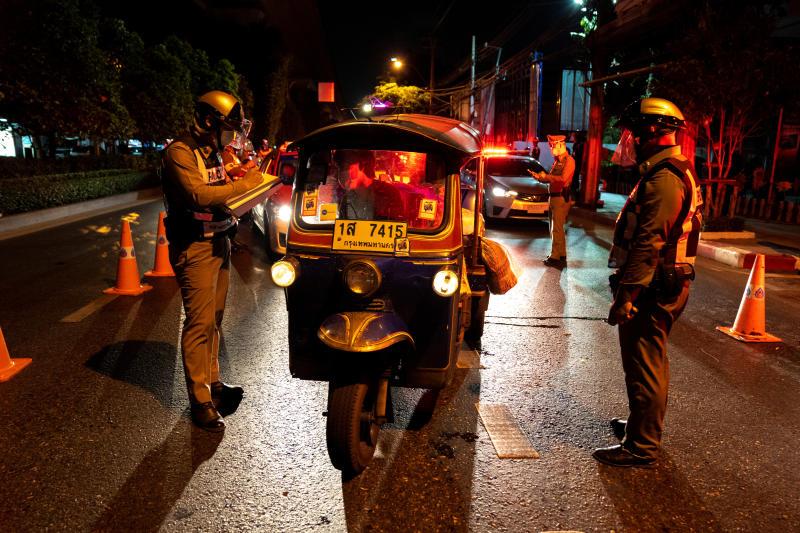 Police question people at a checkpoint in Bangkok in early April, 2020, after a curfew was imposed to prevent the spread of the coronavirus disease. (Photo credit: Reuters)

This mismanagement, I argue, is due to the core’s oblivion to its many peripheries. Despite the success of ‘flattening the curve’ towards the end, initial struggles resulted from the ruling elite’s poor understanding of capital-region relationships. After the Lumpini Boxing Stadium case (Thailand’s superspreader case) broke out in March, the Thai government issued a 14-day lockdown in Bangkok hoping to contain the spread in the capital. However, Bangkok is a textbook example of a primate city that has for decades lured people from the countryside with the prospects of a better life. Upon the announcement of temporary closures, people naturally went home to their provinces—much to the alarm of surprised public-health officials who rather naively believed that people would ‘stay home’, forgetting that their homes are elsewhere. When bus tickets were purchased, passenger seats filled, and borders crossed, the policy faux pas later led to local transmissions in numerous provinces throughout the country.

...more attention needs to be paid to the administrative boundaries that constitute the dilemma in the first place.

As the virus spread, the WHO-endorsed term of ‘social distancing’ quickly entered the Thai vocabulary, once again with distinctly class-based implications. As documented elsewhere in the world, social distancing is a luxury available only to a few, whether it be in grade-school online learning or public transportation. Masks are a good example. A daily necessity in short supply, masks came to be symbolic of social class, as some poor people are forced to reuse theirs since wearing a mask is now a ‘new normal’. What is meant to be mandatory quickly becomes perfunctory, reducing public health to an aesthetic gesture. Worse yet, some Thai institutions proceed to regulate the colors of face masks, once again in the name of aesthetic uniformity.

One thing we have learned from the coronavirus pandemic is that the globalization of diseases requires transborder responses. Yet the first and most prevalent strategy in many societies is to contain and control the border in order to conquer them, the unruly other. But the border itself is a complex, multiscale, multifaceted notion that goes beyond the topographic boundary of sovereignty. Although Thailand’s curve now looks encouraging, heralded as one of the world’s success stories, the ‘big picture’ belies a host of grievances unrecorded in the official registry. Rather than simply sealing the contours, physical as well as symbolic, their contents merit equal attention.

Tao Rugkhapan is a lecturer at the School of Global Studies, Thammasat University in Thailand.