The Anthropolitics of Disaster and Risk

The Anthropolitics of Disaster and Risk

After the Chernobyl disaster that occurred in Ukraine in 1986, the concept of “risk society” coined by German sociologist Ulrich Beck first appeared in the literature. According to Beck, the social production of wealth in “mature modern” societies is systematically correlated with the social production of risks. Today, risks are no longer related solely to external forces (such as natural disasters), but have been largely supplanted by fabricated risks such as deforestation and environmental pollution, which are generated by the key feature of globalized industrial societies, namely overproduction. In Beck’s view, risk society is thus necessarily global, as hazards that we must deal with are not limited by time and space. The notion of “catastrophe” as a sudden and unexpected event that causes great trouble or destruction can therefore be seen as a failure of prevention measures based on risk calculation.

In our time, disasters largely occur as direct result of the human manipulation of nature, and numerous examples illustrate how such manipulation generates global catastrophes: the Chernobyl cloud (1986) that crossed Europe, the impact of which still threatens the health of populations; the Fukushima Daiichi nuclear accident in Japan (2011); deforestation in Brazil exacerbating climate change; and more recently, the global spread of COVID-19.

Local incidents can cause repercussions far beyond the borders of the nation in which they take place, so it therefore becomes unthinkable in the era of re-globalization to consider disasters as strictly “local”: whenever these events have cross-border effects, they also carry a universal resonance as they are experienced globally. In this regard, the COVID-19 crisis has been a prime example of the impact of disasters on the “world society”: the epidemic has spread rapidly across the whole world, plunging more or less all countries into significant chaos. The globalization we knew, described as a time-space compression by Harvey1 and others, has undoubtedly contributed to the wide and rapid circulation of the virus all around the world, such that the porosity of borders has precipitated sanitary porosity.

Moreover, even institutions involved in global governance failed to anticipate (and subsequent to the propagation and spread of the virus, to manage and regulate) the global chaos provoked by the COVID-19 catastrophe. In the context of worldwide uncertainties triggered by the spreading contagion, populations have found themselves widely disoriented.

The Necessity of “Reforming”

The spread of COVID-19 has contributed to revealing the limits of globalization. The pandemic has reinforced the idea that catastrophes and rifts should be integrated into conceptions of the global project. The multidimensional process based on commodification, abstraction of values, and political and economic attitudes that favor the short-term perspective, is not compatible with sudden occurrences that cause long-term damage such as climate change, epidemics, or shrinking resources threatening the environment, plunging societies into long-lasting recovery phases. Moreover, the global economy—designated as one “with the capacity to work as a unit in real time on a planetary scale”2—is incompatible with disasters that should be contemplated in advance. Indeed, a catastrophe is paradoxically both a sudden, unpredictable event, and an occurrence that could be anticipated due to its inevitability.3  A long-term global project including plans to avert and even face disasters should thus be envisaged. Reforming globalization, as called for by Benedikter and Kofler, is therefore inevitable for tackling these problems that will almost inevitably worsen, particularly if the four-wheeled engine “Science-technology-industry-profit”4 remains paramount as it has been over the past several decades. This reform agenda is becoming ever more urgent because time is running out: Dupuy claims that the notion of “risk society” is obsolete since the risk is no longer to come but has already happened and that what we consider possible is today certain. It is therefore vital to include the theme of catastrophes in the overall project of rethinking and reforming globalization for the better.

The utter helplessness felt by individuals at the micro level when faced with catastrophes is another aspect that should be taken into consideration. Most of the time, disasters are reduced to their physicality (number of deaths, material damage). Details about disasters generally include the economic impacts they have had on growth. There is no room for sentiment, distress, or emotions when it comes to balance sheets. It is the economic impact of a disaster (namely damage and losses for capital) that is taken as the benchmark which reflects the severity of a catastrophe. The same has been observed during the COVID-19 crisis: with some exceptions, in such attempts to individualize coronavirus losses,5 the deceased usually have no name and no face; they are just a “number.”

This situation leads to the dehumanization of death. Accompanying the deceased for burial, paying respects to those lost, mourning over the grave, organizing funerals: the nature of recent global catastrophes makes these cultural rituals hard to carry out. In other words, if the disaster is perceived by individuals via temporal frames of “before” and “after,” then rituals should observe and memorialize the boundaries between “those who remain” and those “who are no more.” Yet in times of crisis these rituals cannot be performed, rendering acceptance of the fatal truth difficult.

It is... vital to include the theme of catastrophes in the overall project of rethinking and reforming globalization for the better.

This is another reason why globalization as it is perceived today responds neither to the urgency of contemporary catastrophes that threaten humanity, nor to the distress that these can cause individuals: under these circumstances, the reconstruction of a world after the crisis is difficult to conceive. To address issues at the global level, Morin suggests the establishment of a “policy of humanity on a planetary scale,” or “anthropolitics,” and a “policy of civilization” aimed at improving human conditions affected by the negative impact of market-oriented development that would be overseen by world governance bodies such as the United Nations. This could indeed be a decisive aspect of reforming globalization to become more realistic and more human.

The Necessity of “Reframing”

The second aspect we have experienced during the COVID-19 pandemic is the ineffectiveness of international institutions in dealing with global disasters. Certainly, the fact that this sanitary crisis was unprecedented can explain, in a way, the failure of authorities to address it. However, the outbreak has to some extent been reinforced by the international bodies themselves: their contradictory messages (concerning, for instance, the necessity to wear or not to wear a mask) and announcements (e.g., the World Health Organization’s declaration that the effects of the epidemic “will be felt for decades to come”6) as well as their inconsistency in decision-making have turned the epidemic into a “global crisis” marked by fragility, uncertainty, and indecision.7  This lack of guidance about the epidemic has led to a massive infodemic,8 namely an overabundance of information (and sometimes of misinformation) that made it hard for individuals to find trustworthy sources when they needed them. 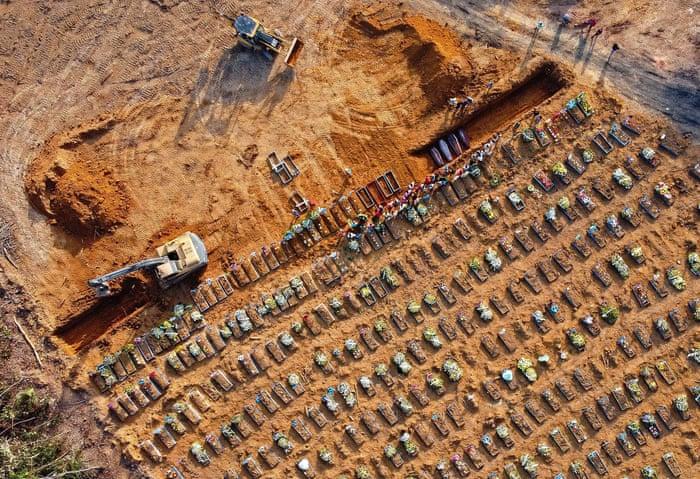 Aerial view of coffins being buried at the Parque Tarumã cemetery in Manaus, Brazil in April 2020. (Source: AFP via Getty Images)

Amid the gloom provoked by the outbreak combined with the international institutions’ hesitations, nations had no other choice but to pull the emergency brake and to try to address the global health crisis by proposing local and regional solutions. Here again, globalization characterized by cross-border flows of people was suspended, as the circulation of individuals was correlated with the propagation of the virus. Perceived as having “emerged from outside,” COVID-19 drove panicking governments to privilege the “local” and the “locals,” putting aside all principles of international solidarity assumed to exist in the age of globalization. Such behavior is exemplified by the so-called “war of masks,” where French authorities accused the Americans of hijacking their consignments coming from China.9  In a situation where interdependence abides without solidarity, it reveals the necessity of reframing globalization, another of Benedikter and Kofler’s requests. In times of global catastrophes, the importance of getting the global–local interface to synchronize seems fundamental to responding quickly and efficiently to dangers that threaten populations. Moreover, local and regional measures in anticipation of global disasters are crucial if governments want to be well prepared for future outbreaks.

In the present “world society,” the assumption that “what is happening in another part of the world is not likely to happen to me” is no longer valid. The COVID-19 crisis constitutes a public health emergency of international concern which is affecting people at both macro and micro levels. As a result, there is an urgent need for global organizations to reconsider globalization by including reflection on both the risks that threaten humanity and those that are created by humankind itself. “Risk society” seems to be turning into a “risk civilization”10 that not only suffers from but also fabricates catastrophes. Thus, globalization has no other choice but to be “reflexive” (as Beck prescribed for modernity)—namely, to confront the premises and limits of its own model by changing both the perspective and imaginary by which it views itself.