Screen grab on May 29, 2020 of the COVID-19 Dashboard by the Center for Systems Science and Engineering (CSSE) at Johns Hopkins University showing cumulative confirmed cases worldwide.

Originating in China, the coronavirus is now taking its toll on most countries of the world, with more than five million confirmed cases and over 331,600 deaths as of May 23. What does this pandemic teach us about global governance of a health crisis? While the human world has championed globalization since the last century, are we now witnessing a more detrimental side of globalization? While the crisis is surely one of public health, it also alerts us to the different and intersecting areas of government, society, and culture. The intersectionality of coronavirus, in turn, takes a toll not only on human life, but on cultural perceptions, medical discourses, racial relations, regional and international health governance, and global politics.

Globalization and its Discontents

Arjun Appadurai has assessed global cultural flows in terms of five scapes—ethnoscape, mediascape, financescape, ideoscape, and technoscape—and stresses that such scapes overlap and do not flow in a single direction.1  The coronavirus outbreak suggests we need to be heedful of one more scape, a diseasescape that intertwines with other scapes and likewise flows in multiple directions. In the age of hyper globalization,2 everything moves faster: people, ideas, money, media information, images, and diseases too. Viruses spread faster with faster human movements. Governments that used to welcome foreign tourists and businesspeople have been mostly unprepared when border-crossers bring inflows of disease.

While most of the globalized scapes that Appadurai discusses are largely welcome and likely to facilitate human progress in some ways, the diseasescape is detrimental and harmful. Today, the threats of disease have increased tremendously because of the great expansion of human mobility. Compared to the 2000s, national borders nowadays are much busier. In 2003, SARS was a more deadly but less contagious virus. Another reason it could be contained within a single region (mainly in Asia) was the much smaller scale of human movement at the time. In the early 2000s, Chinese did not cross borders as frequently as today and most Chinese nationals did not even have a passport. The market for outbound Chinese tourism had barely begun to develop. Around 20 million outbound trips were taken by Chinese annually and over two-thirds were to Hong Kong, Macau, and Taiwan. Since that time, policies to ease cross-border travel boosted the flow of people from China to Hong Kong, exceeding 50 million visits per year.3  At the same time, Chinese outbound travel was extending to all corners of the world. By 2015, Chinese tourists had topped the international tourism market with over 100 million trips.4

Increased movements of people facilitate faster spread of diseases and viruses, imposing threats posed by human mobility and changing the implications of globalization. The coronavirus, a globally-shared disease, has turned all borders into portals of danger and raised suspicions about mobility. China was the original source of transmission, but now the PRC must guard itself from transmission into the country from outsiders and returning nationals. Conversely, the United States was originally in the position of guarding against this immigrating virus, but is now the country with the highest infection numbers and death toll, and is viewed by many as a danger zone. The complexities—and dangers—in this fully globalized system result not only from its scope but from the disjunctures between the flow of the disease itself and the flow of medical information, media discourses, medical practices, and even medical images. All these may enhance or slacken the containment of the virus. One result is a forced opportunity to rethink globalization and the synchronization of its many different forms and flows.

In its earliest phase, the coronavirus was identified with China, and then with the nearby Asian countries where it was soon transmitted. Italy was the first country in Europe to declare a state of emergency and block all flights from China—including Hong Kong and Macau—as early as on January 31. At that time, most Europeans and North Americans were watching the disease as news from afar, perhaps with a touch of concern about the quarantining of their nationals returning from China. Even in Italy, after barring flights from China, Italians largely continued with their daily coffee and football outings, and their hugging and kissing. Few measures were announced to alert citizens to the possibility of the far wider spread of the virus. By March 2020, the scene had completely changed. Asia had become relatively safe while Europe and America were experiencing intimidating outbreaks.

One particular problem with this virus is that it has been difficult to stop it at borders. Visibly sick people might have been barred, but not those carrying the virus, whether pre-symptomatically, a-symptomatically, or post-symptomatically. Moreover, stopping entries at a certain border would not have helped much in a “borderless” Europe. Neither Europe nor North America (nor other areas of the world) acted early to test and trace infection routes and monitor those who were infected. These oversights led to unprecedented outbreaks far beyond anything experienced in China itself, or other parts of East Asia. Even with advance warning signals coming from Asia, European and American governments and people seemed to take coronavirus less seriously.

The coronavirus, a globally-shared disease, has turned all borders into portals of danger and raised suspicions about mobility.

Once the lockdown of Wuhan began, most people in Asia responded quickly. In Hong Kong and Taiwan, for example, citizens saw this as a real life threat. The “mask” alarm went off. People went to shop after shop and queued up to buy masks. Singaporeans began to hoard masks and thermometers. Taiwan was praised for taking early strong measures to stop the entry of all mainland Chinese and curb the export of medical masks to make sure there was enough PPE to protect medical workers and people.5  In Hong Kong, Chief Executive Carrie Lam’s delay in closing the border with China was severely attacked, and medical workers went on strike to demand immediate action. The Macau government, though seldom mentioned in the international news, did a marvelous job stopping the entry of mainland Chinese, tracing visitors from Wuhan and separating them, and becoming the most successful place in containing the spread.6

In South Korea, the outbreak in a church in Daegu in late February led to a miles-long queue of people seeking masks. Korean health workers were soon in full protective gear as they provided coronavirus testing at newly set up drive-through stations. These governments emphasized public information and provided daily reports for confirmed cases, and traced down patients’ close contacts and the routes of the virus’s spread.7  A government website in Hong Kong, for example, provided updates on infections and suspected cases along with other important information. 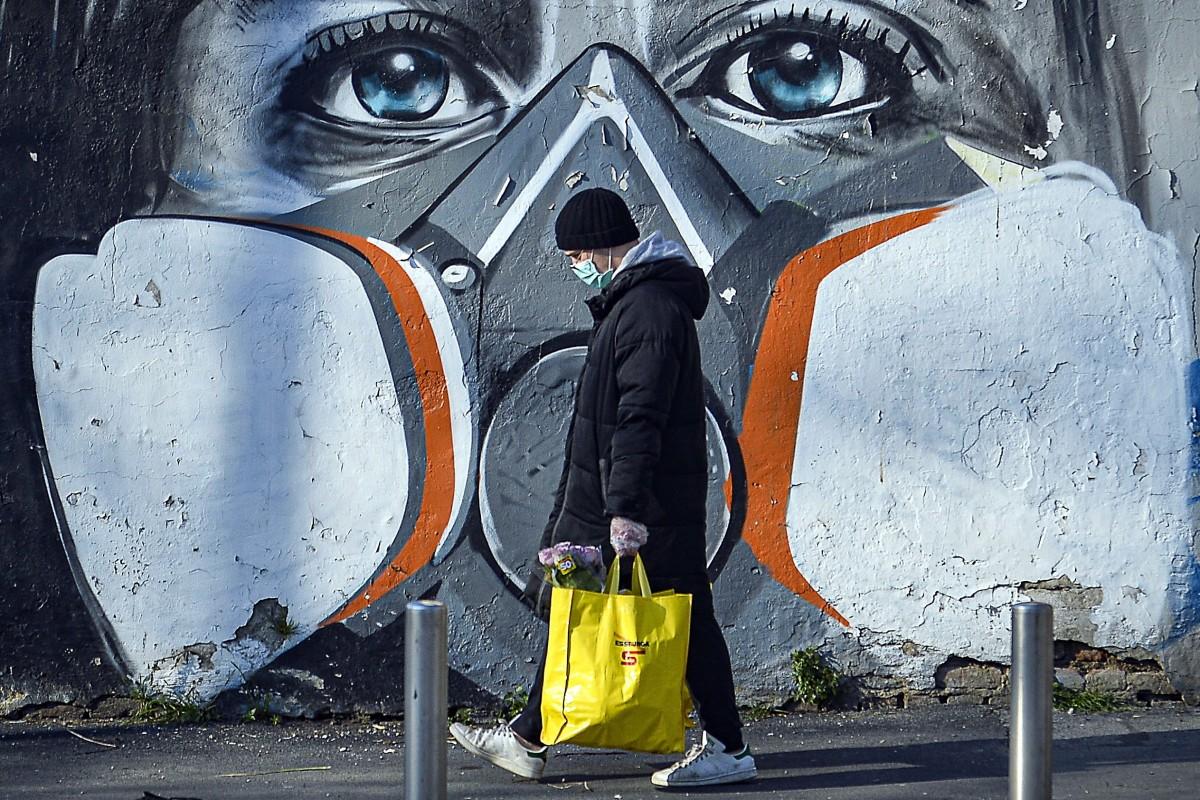 A man walks with his groceries past a coronavirus-inspired mural in Milan, Italy.

By contrast, the outbreaks in Europe and North America seemed to take people by surprise. Border controls were slowly implemented. Testing and tracing were slow to take hold. Tracking of people’s isolation locations and the identities of close contacts of coronavirus patients were unimaginable, not only on cultural grounds but in the European case as a violation of the General Data Protection Regulation (GDRP) of the EU.8  Different systems, cultures, and politics created different national and regional responses to a shared global pandemic.9

The striking inability of most European and North American governments to benefit from the prior experience of East Asian countries doubtless worsened the global coronavirus pandemic. The diseasescape revealed by the pandemic illustrates some unfortunate disjunctions in globalization. It appears that disease is much more effective at crossing national and cultural borders than is information about disease and how to manage it. On top of cultural barriers, there are disturbing indications of how irrational the purportedly rational policy-making process can be, and how some countries trade off transparency in policy for control, either due to incompetence or governmental arrogance about not informing—or even misinforming—their people for their own good.

The pandemic has been a teacher: about disease, mobility, people, and government.10  There have been jarring failures in politics as leaders pursue blame for gain. The failures in policy have rendered a disease—and diseasescape—more dangerous, have shaken global connections, and raise questions about whether there is either the human will or capacity to understand a pandemic panglobally, much less to act on it effectively.

3. This is the figure of 2018; in this year, Hong Kong received a total of 65 million tourists, 78% were from mainland China. See https://www.tourism.gov.hk/english/statistics/statistics_perform.html.

6. Until early May, Macau recorded only 45 confirmed cases and zero deaths.

7. For example, a government website in Hong Kong provided updates of infected and suspected cases and important information, including the names of buildings with confirmed cases as well as confinees under quarantine, and the flights/trains/ships taken by confirmed cases (see https://www.coronavirus.gov.hk/eng/index.html). Taiwan developed a database storing people’s travel and health information to track close contacts of coronavirus patients. In South Korea, information on credit card transactions, CCTV footage, and mobile phone communication all helped the government to trace down the spreading routes of the virus. In China, CCTV and big data were used to track down people’s movement and an electronic health status was imposed on people to screen out suspicious health cases (see https://theconversation.com/coronavirus-south-koreas-success-in-controlling-disease-is-due-to-its-acceptance-of-surveillance-134068).

9. On April 26, the Australian government launched the COVIDSafe App that allows people to trace the close contacts of coronavirus patients.

10. There is also the issue of intranational government, particularly the federalist structure of governments like those of Germany and the United States. In the United States, it has often been governors—and sometimes mayors—who have taken the lead in addressing the pandemic. There has also been more focused attention on some of the East Asian experience with governance of its diseasescape. The Korean case, for example, had been lauded on its medical management in general and such specific successes as conducting a national election in the midst of the crisis. See the appreciative article in The Atlantic: Derek Thompson, “What’s behind South Korea’s COVID-19 exceptionalism?” May 6, 2020. Available online at  https://www.theatlantic.com/ideas/archive/2020/05/whats-south-koreas-secret/611215/

Yuk Wah Chan is an anthropologist at City University of Hong Kong. Her areas of interest include crossborder governance, international migration, diaspora, and identity.

David Haines is Professor Emeritus at George Mason University and Past Co-President of the Association for the Anthropology of Policy.