Technology—especially in the areas of information, communication, and transportation—can be considered a fundamental driver in contemporary globalization processes. To a certain extent, globalization seems at present to be adapting to technology, rather than vice versa—which is a fundamental aspect of the current upheaval around “anti-globalization.” However, the relationship between technological development and women deserves far more critical attention than it has received to date. How are technology and women’s emancipation related? And why should technological development in connection with women actually be addressed in the context of rethinking globalization towards “re-globalization,” as proposed by Benedikter and Kofler (2019)?

The Internet has certainly been one of the most important technological developments of recent decades, and a significant component of the recent phase of globalization, yet not always with positive outcomes. In fact, while a globalizing sex industry and in particular pornography have pushed the technological progress of the Internet (for example, through formats like HTML5), on the other hand pornography has reached new levels of distribution, sales, and profits due to its diffusion on the Internet (Hughes, 2001). Certain kinds of pornography that objectify women and are connected to human sex trafficking and bondage have introduced new forms of sexual exploitation of women not least with the help of the internet, thus to some extent changing the culture of sexuality and globalizing certain aspects of it. However, feminist and queer theory as well as the LGBTQ movement remind us that pornography can also be seen as an expression of sexual freedom promoting sex-positivity, thus making a contribution to emancipation (see also Gregory and Lorange, 2018, on the concept of post-pornography). Here the Internet has also opened new possibilities. Amateurs and independent performers are increasingly able to complement the old-fashioned porn industry with new and different perspectives on the role of women in sexuality. Overall, the internet and the sex industry have grown interdependently, whereby this development has increased the diversity of the global sex industry. However, it should be noted that in 2019, on a global level, women still have less access to the internet than men, which mirrors the different gender use of such new media and continues to represent an obstacle to the achievement of gender equality.

New technologies such as artificial intelligence (AI) systems have recognizable connections with women's issues as well, albeit on a different level. The latest language assistance systems, which are already quite present in our everyday life, have one important feature in common: they are all “female” by default. Amazon's Alexa, Apple's Siri, Microsoft's Cortana and Google Home not only have female names, but also female voices; often their developers program them to have “female behavior patterns.” Yet these patterns are by no means those of an emancipated woman, but instead are similar to those of a well-behaved assistant who has to put up with everything. It is also interesting that speech-recognition software, which is essential for speech assistance systems, is trained by default to recognize male voices (Perez, 2019). It is therefore no surprise that women often find it harder to be understood by speech assistants and consequently their instructions are less often correctly executed.

A traditional female role model corresponds to the characteristics of language assistance systems. They should be helpful, selfless, likeable, and friendly, there to help and support but not to make their own decisions or to develop independently. Women in industrialized societies have largely emancipated themselves from this image and objectification, and have developed new roles as independent and autonomous humans. Historically, these new roles may still be in their infancy, but it is an important achievement that should be supported, strengthened, and confirmed by technological progress, not contradicted by it.

Feminists have been dealing with technology and its effects on women since the second wave of feminism, and while the perspectives have developed greatly over time, one reality has not changed much: the representation of women in technological professions. Although more and more women are studying worldwide (40.6 percent of women and 35.6 percent of men are enrolled in tertiary school) and get a degree (Word Bank Data, 2018), still only about 13-18 percent of engineers are women. The figures vary somewhat depending on the source, but the lack of women in STEM jobs cannot be explained by the large global differences in gender emancipation alone. Looking only at industrialized countries, where women now have many rights, things do not seem any better. In the large technology companies in Silicon Valley—Facebook, Apple, and Google—only 23 percent of tech professions are held by women (Richter, 2020). As a result, women do not equally participate in the design, creation, or implementation of technological innovations. The next example confirms this statement: In addition to language assistance systems, AI technologies are used to build robots. Many of those AI-robots have female feature such as voices, bodies, and behavior. However, they are not used in the military, where the greatest technological progress takes place, but are again relegated to being assistance robots that “work” at tourist information centers or as office receptionists (Benedikter and Gruber, 2019).

In the large technology companies in Silicon Valley—Facebook, Apple and Google—only 23 percent of tech professions are held by women. As a result, women do not equally participate in the design, creation, or implementation of technological innovations.

Another example where female perspectives, assessments, and ideas are still largely missing is medicine. This area depends as well on innovative technological progress and it seems as if here, too, women are clearly at a disadvantage. Starting with research on new drugs: only 25-30 percent of test persons are female, and 90 percent of animal experiments are conducted on male animals (Perez, 2019), even if research has shown that medication can have very different effects on men and women. Diagnostic instruments are also often developed and tested only on men, as shown for example by the angiogram, a method for diagnosing heart attacks. Since male and female bodies are very different and heart attacks can also manifest very different symptoms, heart attacks in women are often overlooked. AI shows great potential to bring enormous improvements in diagnostic systems, but do these technologies now properly include women?

In sum, globalization not only magnifies causal factors such as those that allow epidemics to spread rapidly across the entire planet, but also, through global media and the Internet, it magnifies information and ideas. When ideas are transformed into technology and quickly diffused over the planet, they can have an impact on societies beyond the technological sphere. This is especially true when it comes to women's emancipation, which may not be directly linked to the development of AI but is negatively affected due to the magnitude of regressive representations. The nexus of women and technology still seems to be a niche topic that is not given enough attention as it relates to globalization. When women are underrepresented in tech jobs, an old, traditional female role model is recapitulated through new technology devices and transferred to women in society. 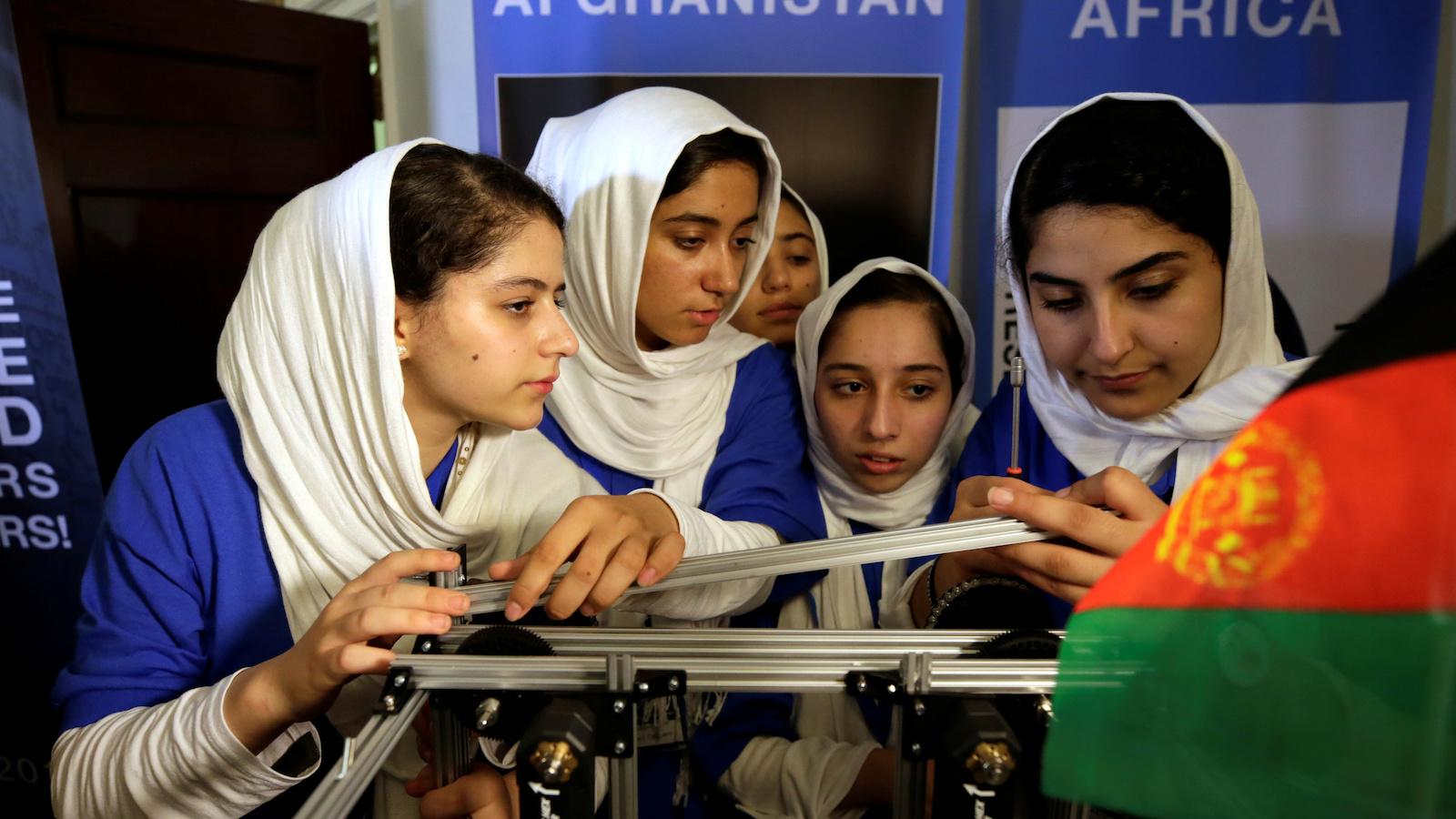 Therefore, the first step is to talk explicitly about these issues and debate them openly. Such discussions should be followed by actions that resituate technology to be a tool for gender equality. Including and encouraging more women for STEM jobs is one first important move. It is definitely time to reframe and reform gender-relevant technological development and to revise its role in globalization so that its benefits are shared equally by both women and men. Reframing power constellations within the technology sector, concretely realizing the inclusion of women equally within all processes, and thus reforming substantial mechanisms within the tech branch could not only fundamentally change technology per se, but even be a concrete part of “re-globalization” (Benedikter and Kofler, 2019). Such changes can influence global developments, and in the end are a necessary part of rethinking the current phase of globalization. Since technology is a fundamental factor in globalization processes it should enhance the lives of individual women and more broadly promote gender equality as a foundational principle.

The connection between technology, women, and globalization is often underestimated or overlooked. A process of re-globalization that considers and integrates this relationship could therefore make a valuable contribution to the emancipation of women. First steps towards this process can already be observed. Concretely, in March 2020 the UN member states agreed to implement the Beijing Declaration on gender equality with explicit reference to the underrepresentation of girls and women in STEM. Moreover, European Union members and Norway signed a declaration in April 2019 “to encourage women to play an active and prominent role in the digital and technology sector,” and within this framework national and supranational strategies are expected to implement this goal. Such concrete measures at different levels are extremely relevant in order to rethink global technological developments in relation to gender. Above all, women themselves—on all levels of qualification, from all social strata, and in all the various interconnections among them—must be included in this process in order to achieve a sustainable result.

Benedikter, Roland and Mirjam Gruber. 2019. “The Technological Retro-Revolution of Gender. In a Rising Post-Human and Post-Western World, It Is Time to Rediscuss the Politics of the Female Body.” In Loh, Janina and Marc Coeckelbergh (eds.). Feminist Philosophy of Technology, Techno:Phil – Aktuelle Herausforderungen der Technikphilosophie vol 2. J.B. Metzler, Stuttgart.

Mirjam Gruber is a Researcher at the Center for Advanced Studies, EURAC Research, Bozen-Bolzano, Italy.