“They, the People”: India as Adversarial Republic and Lip Service Democracy

“They, the People”: India as Adversarial Republic and Lip Service Democracy

Already at the outset of 2020, India’s pursuit of an ambitious global image is taking a beating due to some local events imbued with huge negativity. These events have a complex historical backdrop that stretches back to the founding of the republic in the aftermath of independence, a time that was arguably the worst and the best of times for the Indians. Independence was achieved after a unique freedom struggle employing a mix of violent and non-violent methods. The traumatic Partition and the emergence of Pakistan not only bifurcated India’s geographical terrain but also fractured the national psyche, with near-irreversible impact. Yet, against this backdrop a long and rich debate took place in the Indian Constituent Assembly. The body drafting the nation’s constitution was composed of some of the sharpest minds of that era.1  A voluminous document—privileging equality, justice, liberty, rights, and freedoms— the Indian constitution visualizes rule by the people. Granville Austin (1964:8) might have slightly overstated the case in describing the Assembly as “India in microcosm,” but it surely comprised a broad cross section of representatives whose prime goal was to forge a society and national policy that left no one out. The Preamble to the constitution proclaims (Document II, 1950) that “We, the people… adopt, enact and give ourselves” the constitution. Accordingly, the template of this most sacred document of governance was democratic republic, democracy being the politico-social tapestry. Over time India attained global recognition and respect insofar as this template was achieved.

Jumping to the present, with the passing in parliament of the Citizenship Amendment Act (CAA) on December 11, 2019 and the prospect of creating a National Registry of Citizens (NRC), India is going through its gravest turmoil since independence, deriving mainly from a severe sense of insecurity.2  Regarded by a significant section of people as ‘double whammy’, India is witnessing intense civil strife cutting across religious, ethnic, regional, social, and economic barriers. There are instances of protests led by ordinary people and students in different parts of the country to which the central authorities react in somewhat crude and tactless fashion. It is not yet a civil war, yet it is infused with so much antipathy and antagonism that one wonders whether it is pushing India towards becoming an “adversarial republic.”

‘Adversarial’ literally means engagement with or relationship of opposition, hostility, and conflict, which is a far cry from the founding vision of a democratic republic premised on convivial relations among co-citizens and cordiality between citizens and their elected representatives. Such relations were supposed to involve people in the critical act of questioning (and also appreciating) policies of government based on the respective merits of each case. This practice is thoroughly compromised if rulers adopt a belligerent style—such as, police inaction during riot and killings, police firing on protesters, forced entry of police onto university campuses (especially those with sizeable enrollments of religious minorities) and brutal treatment of students, detention of dissenting intellectuals, and so forth. Of no less concern, this approach generates a combative mood among the people, segments of whom take advantage of such situations and resort to arson, looting, violence, and wanton destruction of public property. Let me assert that this kind of ‘popular’ response subverts the spirit of the republic from another angle. Friction is an inalienable part of ruler-ruled relations—in fact, uninterrupted ‘cordial’ relations between governors and the governed is not good for the health of democracy. Governance involves public struggle having many complex dimensions, so there is bound to be conflict between the authority of rulers and the rights of the ruled. But if adversarial relations become the signature of governing and a chronic syndrome, then eventually a reasonable limit is crossed and the very foundation of the republic—the ‘public thing’ (res publica) as the fountainhead of power—runs the risk of being lost. India now faces this risk.

In more social terms, the question is what kind of ripple effects the adversarial republic is having on democracy. Democracy seeks to establish a political order in which issues of common concern are to be rigorously deliberated for eventual transformation into laws, acts, and public policies. Political actors, as one apt observation (Schmitter and Karl, 1991:7) puts it, “must cooperate in order to compete” in voluntarily taking collective decisions. The most disastrous consequence of adversarial relations is that they threaten to irreparably damage the fabric of democracy. Democracy’s effective functioning depends overwhelmingly on sane deliberations, dialogue, and argumentation. Amartya Sen, in The Argumentative Indian (2005), reveals the evolution of the cultural heritage of public conversation and communicative dynamics of heterodox, pluralist, tolerant, secular Indian society since ancient times. Call it deliberative democracy or by any other name, the core of democracy lies in the rulers and the ruled being perpetually engaged in ‘competitive’ discussion of ideas, often to the extent of giving rise to ‘contentious’ exchange in dialogical mode, without denigrating alternative ideas and opinions. Toleration and respect for dissent add beauty and vigor to democratic polity. In this order of things ‘clashes’ are an inevitable outcome, but they are to be constitutively ideational, not physical. In generating counter-narratives and conflicting discourses—part and parcel of the argumentative process—provocation to violence is beyond the pale.

[I]f adversarial relations become the signature of governing and a chronic syndrome, then eventually a reasonable limit is crossed and the very foundation of the republic... runs the risk of being lost.

As things stand now, India seems to be hastily replacing debate-setting with conflict. Apprehension pervades a large swath of Indian society, creating an atmosphere that is going to do away with democratic polity as known hitherto. Although India’s rulers, irrespective of political and ideological hues, are not yet in a position to openly dispense with democracy, there is no room for complacency, because there is a more dangerous alternative to the formal negation of democracy: the possibility of subverting democracy from within while paying it disingenuous lip service. In ‘lip service democracy’ the ‘hardware’ of periodic elections and institutional architecture will be there outwardly, but the ‘software’—liberal, tolerant attitudes and a spirit of cohabitation amidst diversity—faces erosion from within. The simultaneity of ‘adversarial republic’ and ‘lip service democracy’ is a dangerous proposition for a country that takes pride in nurturing dissent within a multicultural and secular ambience. 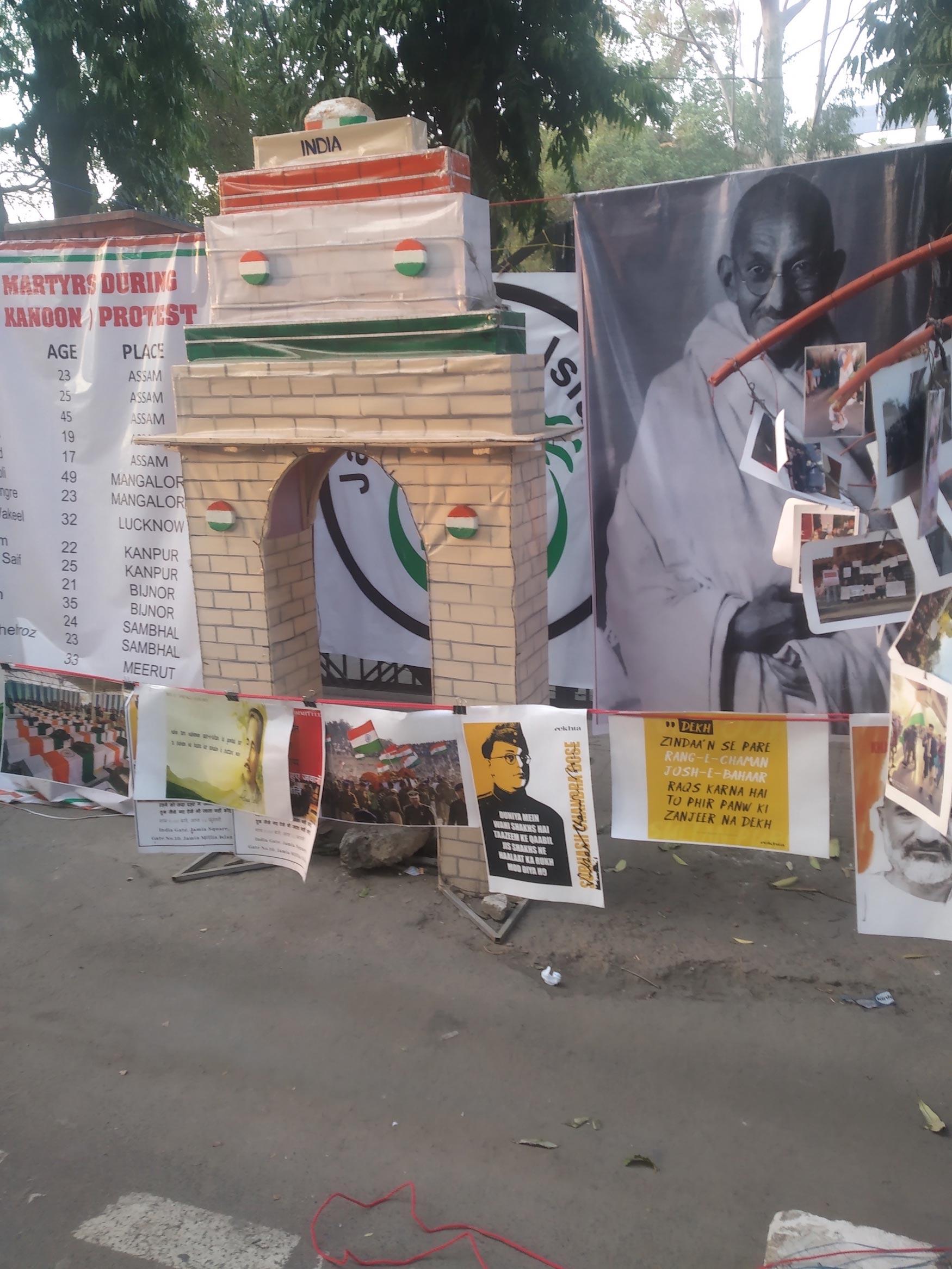 To concentrate a bit more on the software issue, India now faces a political situation in which on almost every issue of public concern the respective narratives of the ruling party at the center and the opposition are marked by intense hostility and zero tolerance of alternative opinions. Crass populism, rhetoric, dramatics, vilification, ridicule, and personal attacks combine in every possible way to construct the unwritten rule that “whoever differs from us is our enemy.” There seems to be no middle ground, no recognition of self-committed errors, and little space for negotiation. The competing narratives are compulsive, constructed and presented in binary terms of either wholly true or wholly false, with no gray zone. Let me make a provocative argument: while the BJP as the ruling party has failed to show either tolerance or tact, thereby pushing adversarial relations steeply upwards, the opposition is guilty of the same behavior. If, for instance, one follows the style and mood of prime-time talk shows in national and regional television channels, it is amply clear that official spokespersons of the BJP as well as those of the opposition leave little space for constructive arguments and counter-arguments.

Pseudo-debates are deftly choreographed by the mainstream media, in which designated anchors shed role expectation and become highly partisan. To make matters worse, even the representatives of the fragmented civil society, from contending sides of the spectrum, show intolerance and sow angst in favor or against specific policy positions. As a result, the important nuances of issues are relegated to background by both the pro- and anti- elements. A brief reference to the sensitive, significant, but touchy issue of (religious) minorities helps to substantiate this point. In nearly all instances the central government’s supporters dismiss, often with astounding arrogance, the insecurity gripping Muslims in particular. On the other hand, the opposition tends to fall silent on the insecurity of minority Hindus caused by forced migration from Kashmir. The either/or norm prevails in the international context too. Thus, one is expected not to speak in the same breath about the plight of the Muslim Rohingya refugees from Myanmar and instances of persecution of minorities in Pakistan and Bangladesh. In a classic Scylla and Charybdis scenario, if one refers to the plight of Muslims one risks being branded as anti-national and/ or unpatriotic; on the other hand, reference to the case of the Hindus may invite accusation of being communal. In the absence of a more tolerant and inclusive approach, such binary labels flow freely from the lips and dominate contending discourses, making ordinary people the inevitable losers in the concrete matter of rights, entitlements, and dignity.

The convivial spirit among co-citizens assumed by the framers of the Indian constitution had precisely sought to banish what India@2020 seems to be nurturing: exclusionary practices and rising intolerance. The now prevailing political climate generates a severe challenge to the idea of India. Today’s political turmoil should be treated as a wake-up call to steer clear of the deadly promotion of an ‘adversarial republic’ and ‘lip service democracy’, whose monochromatic ways raise the possibility of transforming “we, the people” into “they, the people.”

1. It incidentally referred to the “great” American constitution and qualified it further as the “soundest, and most practical and workable republican constitution in existence” (Document I, 1946; italics mine).

2. Under the Citizenship Amendment Act, 2019, Hindu, Sikh, Buddhist, Jain, Parsi and Christian migrants who had entered India by 31 December 2014, and had suffered "religious persecution or fear of religious persecution" in Afghanistan, Bangladesh and Pakistan are not to be treated as illegal and made eligible for citizenship. (Source: “The Gazette of India”, Ministry of Law and Justice, Government of India, New Delhi, 12 December, 2019.

http://egazette.nic.in/WriteReadData/2019/214646.pdf). The bone of contention is that there is no reference to the Muslims (on the ground that the three countries are Islamic countries), which violates the spirit of the Indian constitution and the secular fabric of the Indian society. The NRC is a register of all ‘legal’ Indian citizens, which is mandated by The Citizenship Act 1955 as amended in 2003. It has been implemented for the state of Assam in 2013–2014. The Government of India, led by the Bharatiya Janata Party (BJP), the largest partner in the coalition, plans to implement it for the rest of India. The NRC generates the fear that the religious minorities, particularly the Muslims, will be profiled and deemed as “illegal migrants” to be ultimately pushed out of India. The BJP, the dominant partner in the National Democratic Alliance, a coalition of Right-wing parties constituting the central government in India, finds itself almost alone in its resolve to enforce the CAA and the NRC, with even some of its coalition partners also opposing it.

3. Hindutva is a politico-cultural concept resting on the ‘Hindu way of life’ as national character. It supposedly goes beyond narrow religious connotations, and controversially includes all religious communities in India under its ‘broad’ fold.